In Nazareth, Parks are For Kids, Not Police Stations 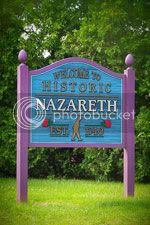 Our friends at the Lehigh Valley Planning Commission tell us one-third of Nazareth's parkland has disappeared since 1970. Borough officials have reacted to this disturbing news by deciding to eliminate even more parkland. They want to erect a new municipal center in a residential neighborhood. They'll chew up about an acre of Nazareth Hall Park for borough offices and a shiny new police department. Police officers will respond to emergency calls by breezing by children playing pickle and freeze tag. I guess the kids will have to invent a new game - dodge the cop cars. When someone noted the potential danger to children, Councilman Samus shrugged it off, calling it a "weak argument".

Nazareth's Borough offices and police department are currently located in a historic building within their proposed Main Street District. In that location, borough officials could at least try to obtain some funding from the state's DCED for renovation. Grants are available for up to $250,000. Instead, borough officials have attempted no improvements at their current location for at least ten years, in what some call planned obsolescence. How likely is it that state officials would provide any funding for a government center in a park? Are they nuts? However this folly is financed, the cost will be borne exclusively by the Nazareth taxpayer.

Understandably, Nazareth's residents are quite upset. They've packed meeting halls, distributed fliers, and tonight plan to rally in the very park slated for partial extinction. They've circulated petitions, and will start presenting them to Borough Council, perhaps as early as tonight. Councilwoman Cindy Werner, an expansion opponent, will appear with me today on WGPA 1100 AM at 8 AM, and you can livestream or call in at 610-866-8074 and make your views known. I think the sentiments in one sign say it all - "Parks are for Kids, Not Buildings".
Posted by Bernie O'Hare at 7/10/2006 12:01:00 AM

As far as the Main Street grants, they are for Anchor Buildings or Downtown Reinvestment that triggers additional private sector dollars. A municipal building would never trigger private sector dollars to get the grant. I don't think that would be the best use of those kinds of grants b/c no private money will ever come into play.

That said, building in the park sounds like a bad idea.

Silly Bernie, parks aren't for kids, they are for paving!
I finally have the LVPC Slogan:

Dear Bernie:
WE have many beautiful parks in Upper Macungie. Unfortunately, 90% of the population has to drive to get to them. The Township got a growing greener grant of $200,000 for the corner of Ruppsville and Cetronia Roads, but here is what happened there.

Penndot bulldozed all the old growth trees,leveled the old stone barn, and scraped off all the topsoil, so they could use it for constructing the Rt 222/100 bypass.
This leaves a thin clay surface, which doesn't exactly allow for water absorption.
So those residents are seeing more flooding, oh, and by the way, Tractor Trailers are allowed, because of all the large warehouses. Sounds like a great, safe, place for a kids park to me!

Bernie, you are right ON!

Where I live, they just paved over the baseball field at the township park to put the new District Magistrate's office there.

When I bitched to one of the Commissioners, he said that there are "plenty of other parks" for kids to play at. Not within walking distance! I told him he's gonna see a lot of kids getting hauled into that new DJ's office for doing drugs and petty crimes because they have nowhere to play ball anymore!!

I think that the people of Nazareth should all carry pitchforks to their next meeting.
I think the visual effect would be priceless.

To LVDEM, Thanks for your comments. The state DCED official who met with Nazareth indicated that it "might" be able to get funding. Your comment makes sense so I guess it is no slam dunk. I read your comments on thje air this morning to make suyre the public was aware.

But I have to tell you kids still do play pickle. I n fact, most of trhem prefer it to baseball. It might be fun for them, but it's no fun for a 55 yr old fart. Myabe that's one reason why it's so much fun for them.

To DEM FLY ON THE WALL& Anonymous, Thanks for your comments. They were read on the air this morning. I'm curious to know what DJ office was built at the expense of a park.