Why the LVPC Wants Wider Highways

By now I'm sure you've read accounts in either The Morning Call or Express Times telling you that the LVPC has endorsed plans for a wider Route 22. LVPC Exec Director Mike Kaiser dismissed public concerns that our oil production has peaked, which would make a wider Route 22 a waste of money. But if you want to know the real reason why the LVPC wants wider roads, just take a look at their parking lot. 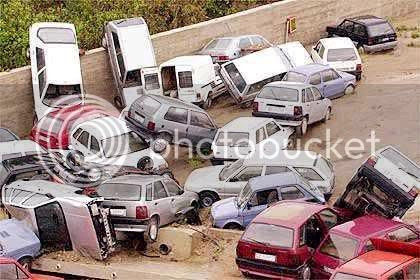 My God Bernie, do you ever sleep? and you are telling me to sleep with one eye open?!!!

LVPC Executive Director Michael Kaiser comes to Northampton County Council every year at Christmas time for his ritualistic request for hundreds of thousands of dollar in grants for himelf and large staff located on Marron Drive.

In my "crazy ramblings" disseminated through e-mails, website, blog postings, newsletters, and bullhorn, I have nomenclatured these non-profits "shadow govenments" - like the Dorothy Pool and Weller Health and Wellness Center foundations.

In fact, these nonprofits are the palpable governments of substance, casting their long shadows over the so-called Lehigh Valley's counties of Northampton and Lehigh.

The lobbyist for these palpable governments is the Northampton County Interim Health Board, whose meetings, as reported in today's The Morning Call, routinely violate Pennsylvania's Sunshine Law. (So what's new?)

The Interim Board was created at the Northampton County Council meeting of December 6, 2004, when my usual companion at those meeting, John Todaro and his wife Rosina and her brother were winging their way Florida and I was the meeting's lone member from the public.

Present that evening, however, was the entire legislative delagation of the misnomered lehigh Valley, on the pretext of presenting Councilman Wayne Grube an award for his many years of football prowess as a high-school player and later coach. (Todaro says Grube played too much football without a helmet.)

The real purpose of the delegation that evening was "to be present at the creation of the interim Health Board."

It's creation had required the delegation's sponsorhip and passage of the special-interest legislation needed to creat the board in the first place.

Northampton County District Attorney John M. Morganelli - like Michael Kaiser only days before Christmas - with his annual gift-list for more warm bodies for his overworked staff.

After the delegation and Morganelli had discreetly left the meeting following their requests, DCED Authorities' Coordinator John Kingley was able at last to make his Christmas request: a Tax increment Financing (TIF) property-tax exemption for the 25th Street Palmer Towne Centre shopping mall, the project that has become the subject of a lawsuit brought by Wilson Borough businesses, located directly across 25th and Edelman streets from the mall, claiming violations of Palmer Township and Wilson Borough zoning ordinances.

Also at the meeting in which council passed Executive Glen Reibman's "election-year no property tax increase" 2005 budget was Reibman's Fiscal Affairs Director Jean Mateff, a principal in the county conspiracy that fired two NGO computer technician who blew the whistle on their employer, Affiliated Computer services (ACS of Dallas, Texas) of illegally hacking the county's computers, a violation of federal law covered up by county officials, including Controller John Schimmel and DA John Morganelli.

When I objected to Kingley's TIF and Mateff's and Hamann's budget, and the swaption refinancing required to "balance" in order to preserve fundds needed to "preserve open space," a brouhaha erupted.

It started in council chambers, but quickly moved across the corridor to the office of Kingsley and his boss Drew Lewis, where I went demanding to see all correspondence related to the Palmer Towne Centre TIF.

I was escorted from the Govenment Center by two deputy sheriffs, who told me they would have to file and incident report.

When a day or so afterward, I went in person to the Sheriff Hawbecker's office, I was told by a deputy that no such report existed.

When I objected, his excuse was that he had "run out of film."

My subsequent complaints to the TV station's managment were ignored, a reprise of the 1996 Easton City Council meeting at which I was arrested for objecting to the creation of the city's, Binney & Smith's, Bixler's Jewelers, Express McDonald's, the Hugh Moore Park Museum and Visitors Center, and the National Heritage Corridor's creation of Two Rivers Landing - whose 10th anniversary Easton will be honoring tomorrow, with the cost of tickets to B&S's Crayola Factory reduced to $6.00.

The Health Department issue involves not only Northampton and lehigh counties and the ersatz Lehigh Valley state legislative delegation; it also involves the Northampton County Court of Common Pleas, and its President Judge Robert Freedberg, as well as the Pennsylania Attorny General's office of J. Michael Fisher, who now sits on the Third Ciruit Court of Appeals in Philadelphia.

The occasion was the mismanagement of Easton Hospital: Always a nonprofit hospital, like those in Lehigh County, its mismanagement forced its sale to Community Health Services of Chattanooga, Tennessee, as a for-profit.

Judge Freedberg and the PAAG presided over this transition, in a scenario similar the private foundation in a small, remote Pennsylvania town.

Pennsylvania courts forced its relocation to Phildelphia to spur the city's tourist trade.

Much the way Philly Mayor Ed Rendell used his political clout with Pres. Bill Clinton to locate the battleship U.S.S. New Jersey, the most decorated battlewaggon of WWII, to Camden - to spur the economic development not only of Camden, but also Philly.

The ship is clearly visible from Penn's Landing.

This man-o-war, on which I served in the Korean War under 7th Fleet Admiral Jocko Clark - the first native-American to graduate from the U.S. Naval academy - should have been anchored as a museum in Liberty National Park in Newark.

The U.S.S. New Jersey is a national icon.

This all points up the power of a state's chief executive, who has almost exclusive power to decide whether a native-American people like the Delaware Indian Tribe of Oklahoma - which was a territory when Jocko Clark was born there - may have an off-reservation gambling casino or not.

Rendell was opposed from the beginning of this aboriginal people's right to a casino on the 315 acres in Forks Township that William Penn's son Thomas stole from it in the notorious Walking Purchase of 1737.

Since then, a federal district court and the Third Circuit Court Appeals have followed Rendell's lead and ruled against the Delawares.

Charlie Dent, representing the farcical Lehigh Valley's 15th Congressional district, has also followed suit by introducing legislation that would deny the Delaware's the recovery of their land.

Billy, I don't want to be mean, but don't you have your own blog?
If nobody is reading your blog, is it fair to Bernie to "clog his blog"? You need to focus on an issue once in a while, and occasionally say something coherent. For now on, I'm going to do like LVdem and other Bloggers, I'm just going to scroll over you.
Really, what the hell does the County Interim health board meetings have to do with a picture of a traffic disaster?

Billy, you know I like your writing style and appreciate its artful language. And I encourage you to continue posting. I won't censor anyone. But if uyou want others to read what you say, then you need to be brief and on point. LVDEM has already told you this. You have a wonderful mind and powerful prose, but you turn people off when you go on for too long and when you start going way off the point of the post.

I find some information here.