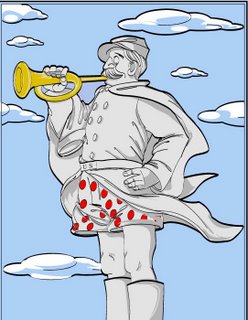 Since taking over last week as guest host on WGPA 1100 AM "At Issue" talk show, radio listeners have been exposed to rants from the Lehigh Valley blogosphere. Tomorrow, bloggers from Easton Undressed will be on the air, fully clothed, to talk about their masterpiece of technical innovation. They'll also be talking about Easton, Mayor Mitman, the Easton police, and whatever their little hearts desire. You can livestream the show, and can also call 610-866-8074 with questions or comments.

I also expect to hear from from Russ Shade, who's tangling with Julie Harhart in the 183rd legislative district, and Chris Casey, who's taking on Gerlach in Lehigh Valley's westlands (134th). It's a case of two political neophytes against well-entrenched foes with big warchests.

Not surprisingly, Shade and Casey bring some new ideas to the table. Example? Campaign finance reform. Shade believes campaign contributions should come from people or PACS that reside in the legislative district, and points out that less than 5% of Harhart's $300,000 warchest over the past four years has come locally.

Bernie, Gerlach is running for congress. I am running against Doug "Fourth" Reichley.

As his opponent,in fairness, I have to clarify the record.
Reichley got a pass from the leadership to vote "NO" on the raise, but did accept $4000 of it, and still has not repaid most of it.