When they first asked Northampton County Council to approve their planned $43 million courthouse expansion in 2001, court officials repeatedly assured the project would not go over budget. On no less than three occasions, Court Administrator James Onembo promised a skeptical council there would be no cost overruns. And President Judge Freedberg, in transcribed testimony, essentially guaranteed he would not be back for more: "Give us $43 million, and we'll come in at that or under."

Well, they're baaaaack! The courthouse expansion project has just $84,000 left in the till, but is expected to cost at least $3 million more. And heavens, they haven't even started those wind-sensitive fountains! At yesterday's Finance Committee meeting, a cocky court administrator was pointing fingers everywhere except at himself or the judges. 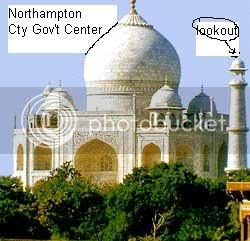 When Committee Chair Ron Angle, joined by three other members of Council, reminded Onembo about his earlier promises, Onembo did a nice little jig. First, he tried to deny what he said on three separate occasions, although he's no St. Peter. Then Onembo tried being indignant. "Get with reality!" "To point a finger at anybody is unfair." Finally, he blamed Council, telling them that they could have checked progress anytime they wanted. Yeah, right!

County Exec John Stoffa (who was elected after this mess started) wearily told Council that, although he's going to try to renegotiate contracts with the architect and contractor, there are going to be overruns. And it's too late to cancel some of the goofy items like the fountain because the county would only get 30 cents on the dollar in return. (They should have bought at Walmart.)

While the County Exec and the Finance Committee struggled for a way to come up with $3 million, Court Administrator Onembo slinked away, like a rat from a sinking ship.

Here's something to ponder. When a person like you or me makes a false statement to a judge he can go to jail for unsworn falsification to authorities. But shouldn't the same rules apply to a court official and a president judge, who broke repeated promises to come in at or under budget? Freedberg had such disdain for the public that he didn't even bother to show up for the hearing. I thought he had a little more respect for the public than that. I guess I should "get with reality."

I have plenty to say about the judges' $43 million mismanaged Taj Mahal, a monument to judicial arrogance. That disaster might be the best argument Cunningham has for resisting similar plans in Lehigh County. But I'll spare you this anatomy of government failure until next week.
Posted by Bernie O'Hare at 7/28/2006 12:02:00 PM

Oembo sounds like a real jerk who doesn't know who pays him.

Why didn't they scale back when they knoew they were going over?

Bernie this is a November 2005 post from Easton UnDressed...

College Employee--"John, tell them about your proposal for the Bethlehem Steel property..."

[paraphrased]
Candidate--"Well, the world's oil supplies will be exhausted in about 30 years; according to oil company research. So we must dedicate ourselves to finding a viable alternative. We could build a world-class energy research facility there. And the worlds great minds can come from near and far to make hydrogen fuel economical and viable. All-the-while putting the Lehigh Valley on the map as an academic Mecca."

College Student-- "Do you have any other plans for the Bethlehem Steel site?"

Any hopes I had of firming up my vote for County Executive after that hour were destroyed. My head was spinning. I found the candidate to be a bit aloof and very apathetic to issues important to Eastonians. He was a nice enough guy, but he failed to give me confidence in his abilities to represent me as a resident of the county or city. His focus was lacking.

When he praised the current executive's work on the new court house facilities a voter asked him how the neighborhood surrounding the complex was being helped. The candidate focused on justifying the prison. The voter stated that he understood the need for the prison, but he understood the needs of the city's residents more. The candidate failed to notice that "Northampton County Camelot" was constructed in the middle of one of the lowest earning areas of the city. A shiny castle in a sea of urban decay.
The candidate talked of taxes as a way of life and expressed his belief in the necessity tiny increases, but he failed to discuss tax compromises such as fees and new revenues. Garbage tipping fee increases were mentioned, but he acknowledged his competitor for pushing the issue forward.
He debated a voter over whether visitors were as important as residents. Being the world's concierge seems to be all the rage these days. Service out over service in. Hosting friends over providing for the needs of the home.

He gave the impression of being just another suburban bureaucrat that only thought of Easton as a living; not a place to live.

By not satisfactorily addressing the county's relationship with the city (outside of pledging to meet with the Mayors-- including Allentown's--monthly), he failed to lobby my support. The only thing he said that actually leveraged my vote was that he thought his competitor "would make a very good County Executive."

House of Crayons, You mat be beginning to notice this, but peak oil is one of the most important issues out there right now. It's a lot more important than courthouse overruns or Easton police or even my problems with Lamont McClure and Nazareth.

Now, I'll give you this - most people don't realize how important that issue happens to be and are only beginning to notice as fuel prices go up.

One mark of a good leader is that he actually leads. He doesn't sit around and talk about pensions or parking because that's what we want him to talk about. He also is a person who has the foresight to prepare us for future problems. Stoffa's a step ahead of most of the rest of them on that one, buddy. He may have lost your vote, but he did the right thing by pointing it the need to address our energy crisis. Sooner or later, you'll see that, too.

And rememberm he's not the one responsible for that "shining castle in a sea of urban decay." (I love that phrase!)

I sure don't want to go over the pros and cons of Stoffa V. Nyce. That train has left. My only objectio to Nyce is that he's a bean counter - and I fear those guys in public office. They tend to overlook people, but that's not really fair to Nyce because I don;t know him and can only rely on what I've read.

Time will tell whether your criticism has any merit. Right now, I'd say NO. Stoffa inherited a big mess and we'll be lucky if all he does in four years is restore county employee morale.

The REAL villians in the mess vis a vis Easton, should be apparent to you. Who pushed for that shiny castle? Who benefits from it? Who didn't care about the prison expansion ruining an Easton neighborhood. Who didn't care that taxes had to be increased and people laid off for this obscene monstrosity? It sure ain't Stoffa. I'll be talking about this soon. I can't wait to see what you think.

Lehigh County is on the same irresponsible path, I can only hope Don Cunningham can keep the tax and spend republican majority from building their own Taj Mahal.

Chris, Yes, what Cunningham is doing in Lehigh County is really what should have been done in Norrthampton County. I will have a post about that later this week

While peak oil and global warming may be fashionable and worthwhile causes, they are definately not good local goverment issues. They are issues that an elected official should certainly address after they serve their IMMEDIATE CONSTITUENCY.

The Northampton County Executive's office is not a pulpit for special interests. Just because I have a deep seated passion for an important matter does not make that matter relevant for a local office.

The immediate quality of life must ALWAYS be addressed. The loss of focus is a big part of the mess in Easton's West Ward.

Buy your groceries before you pay for your yoga classes. -- Olde Pragmatic Saying