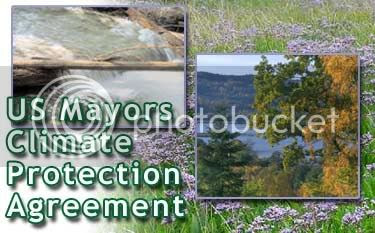 Joining 266 other mayors throughout the U.S., the mayors of the Lehigh Valley's three cities will today face the challenge of global warming by signing the U.S. Mayors Climate Protection Agreement. Mayors Ed Pawlowski of Allentown, John Callahan of Bethlehem and Phil Mitman of Easton will make a formal statement endorsing the Agreement 1:30 P.M. today at the 19th Street Theatre in Allentown.

A. We urge the federal government and state governments to enact
policies and programs to meet or beat the Kyoto Protocol target of
reducing global warming pollution levels to 7% below 1990 levels by
2012, including efforts to: reduce the United States' dependence on
fossil fuels and accelerate the development of clean, economical
energy resources and fuel-efficient technologies such as
conservation,methane recovery for energy generation, wind and solar
energy, fuel cells, efficient motor vehicles, and biofuels;

B. We urge the U.S. Congress to pass the bipartisan Climate
Stewardship Act sponsored by Senators McCain and Lieberman and
Representatives Gilchrist and Olver, which would create a flexible,
market-based system of tradable allowances among emitting industries;
and

C. We will strive to meet or exceed Kyoto Protocol targets for
reducing global warming pollution by taking actions in our own
operations and communities such as:

1. Inventory global warming emissions in City operations and in the
community, set reduction targets and create an action plan.

4. Increase the use of clean, alternative energy by, or example,
investing in "green tags", advocating for the development of
renewable energy resources, and recovering landfill methane for
energy production;

6. Purchase only Energy Star equipment and appliances for City use;

10. Increase recycling rates in City operations and in the community;

After the Mayors' news conference, the public is invited to a FREE showing of "An Inconvenient Truth." (Now they tell me!). I had to pay to see this movie, but it was worth it. I reviewed it and even conned a friend who works at The Morning Call to slip it in as an op-ed while most of the editors were on vacation. A commenter named Brown Dog wrote his own fascinating assessment from a different perspective. If you do see the movie, I have one request. Please stay for the closing credits, where there are useful tips on what we all can do, individually, to reverse global warming.

Saturday Update: "It's a no-brainer, right?" Those were Easton Mayor Phil Mitman's words as he joined the Mayors of Bethlehem and Allentown in signing the U.S. Mayor's Climate Protection Agreement. Bethlehem Mayor John Callahan: "Air doesn't stop in Allentown, air doesn't stop in Bethlehem. It blows across municipal boundaries." (Too bad the LVPC wasn't thinking like that when it adopted its latest long-range transportation plan.)

You can watch a two-minute video of the Lehigh Valley Mayors signing the Climate Control Agreement by clicking here.
Posted by Bernie O'Hare at 7/21/2006 12:02:00 AM

money magazine rated Bethlehem as one of the top 100 places to live in the USA. Any comments?

I'm surprised it was only number 88.

As far as Bethlehem, it's a great city but I love cities in general.

According to someone who works in Beth city gov't, Bethlehem already has a few "environmental initiatives, e.g. our award winning recycling program, our proposed Greenway in South Bethlehem, our Methane recovery system at the Wastewater Treatment Plant and its use for drying sludge - saving energy costs, avoiding fossil fuel use, and reducing landfill use - our rezoning of South Mountain to all Rural Residential / Conservation zone - creating a conservation zone on the mountain and stopping multifamily development in the future." Maybe that's one reason why it's in the top 100.

I am beginning to think that the Allentown initiative is to level every corner and build a shiny new
store. The way the windows slanted out at Diehl's appliance at 19th and Tilghman gave that building a defining character, as did Saylors odd shape across the street. Soon there will be a pretty new bank with a modern facade at Diehl's and an Auto parts chain at Saylor's
I'm sure they will have plenty of grease at the auto parts store. Maybe all the dignitaries coming to the 19th street theater today will go to Saylor's to dine afterward. Maybe I am wistful for a past that no longer exists in any way, shape or form, but why does everything have to be new?

Hello Anon, On my blog, I have links to two great Allentwown blogs - Our West End Neighborhood and Old Fairgrounds. You will se that Allentown is making a comeback. Some of it is new but some of it is the restoration of some of Allentown's former glory. Those bloggers, like you, are wistful for Allentown's past.

Negative of the mathane gas-to electricuty-producing plants, at least in Northampton County, is the absence of existing infrastructure gas and electric transmission line.

These plants, like Grand Central Sanitation's in Plainfield Township, and IESA one approved last night for Lower Saucon Township, is that they have to be built on or near the landfills themselves.

These landfills, existing before the continuing contagion of development, demand continuous stream of organic refuse for methane-gas production.

The Plainfield facility has encroached right down to the backyards of residents of Pen Argyl's George Street.

Leachate generated by the landfill's methane-creating garbage has be treated before discharge into strems like Martin's Creek that flow into the Delaware River, only miles north of Easton's water-purifying plant.

This is true as well of the IESA facility that relies on the Lower Saucon Township plamt, formerly owned by the City of Bethlehem.
Bethlehem couldn't wait of get rid of it, and incurred a $13 million IRS fine for "burning the yield" on the municipal bond Bethlehem floated to finance the landfill transfer transaction.