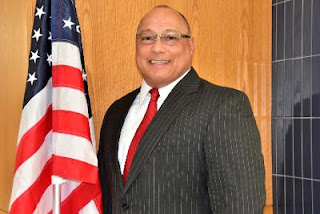 We were all saddened by the unexpected death of Magisterial District Judge Wayne Maura in November. Amy Zanelli, who has yet to complete one term as a Lehigh County Commissioner, was quick to announce her candidacy for the open seat. Fortunately, there's another option. This one is an Army veteran, a former corrections officer and a former Bethlehem City police officer. His name is Van Scott.

A life-long resident of Bethlehem, Scott has a degree in criminology from DeSales and a Master's from St. Joe's.

As a Bethlehem cop, Scott rose through the ranks to become a Detective Sergeant. He served as a school resource officer at both Liberty High  School and at East Hills Middle School. He was also the drug elimination officer at the Bethlehem Housing Authority.

Scott vowed to bring a principle that is often missing from courtrooms manned by opportunistic politicians and lawyers - common sense.

Scott, a Democrat, will cross-file.

Don't know the guy but thank God there is a qualified alternative to the unqualified narcissist Zanneli.

Van Scott is a fine upstanding man and will make an excellent judge. He has my confidence and my vote.

Van Scott is a fine upstanding man and will make an excellent judge. He has my confidence and my vote.

I believe she ha her own PAC

As a lifelong friend of the Honorable Wayne Maura and West Bethlehem resident I was happy to see another candidate for District Justice. Van Scott’s qualifications are impressive. His education and experience with the Public, young and old, is just what is needed for this position. Wayne did his job with common sense and much compassion. Whoever takes this job has big shoes to fill. We think Van Scott is that person. He’s got our vote.

I have known Van since 1997. I have had the opportunity to see Van in the educational role as a Criminal Justice Instructor at Lehigh Career and Technical Institute, as I was teaching their Emergency Medical Responder course being offered. There were days that we shared a classroom and I was able to see him present cases from the time when he was a Detective Sergeant on the Bethlehem Police Department. He held the students interests and had them involved in the discussion. He always has their best interest in mind and is willing to help them succeed. He is honest and fair with each of the students. I have also had the privilege to see Van teach in other areas of education as well and he brings the same honesty and fairness no matter what subject he is teaching.
My father Tim Stephens is a retired Lieutenant on the City of Bethlehem Police Department and was privileged to know Van Scott and most of the officers on the department at that time. I also worked at the Bethlehem DUI Center when it was housed at the Bethlehem Police Department and had the opportunity to meet and work with some of the Bethlehem Police officers and Van Scott before his promotion to Detective Sergeant. They are some of the finest men and women I know.
Van will make an excellent Magisterial District Justice; as he brings with him the knowledge of law enforcement and an education in the Criminal Justice area. Van will not only bring his knowledge, but he will bring honesty, integrity and fairness to each case that is presented before him. He does not prejudge people or situations; he waits for all the facts before he makes any decision.

Ummm not even close to Judge Maura

Zanelli is most qualified with all the endorsements she needs to raise the funds and win. Trouble with Bernie is his biggest decision every day is who to gaslight the next day, because he is a pitiful lifelong failure in everything he touches.

go Amy! Best candidate and will win hands down

Although I had never heard of Van Scott before, based on the information in Bernie's story he is clearly a far superior candidate ten times over and very well qualified. Hopefully the voters will see that.

"Unqualified narcissist" as 7:29pm put it is a good descriptor for Zanelli.

Why is Zanelli actually running for this very important position? Is it political or for some other reason? Looking at both candidates Van Scott should win by a landslide. But unfortuately we all know how politics play a major part on choosing the WRONG CANDIDATE !!!

Zannelii is the Lehigh County's Zirinski. Both are self promoting pols.. No common sense which is needed in this position.

Geez Let me count the ways why Amy Zanelli is out of her league. Amy Zanelli jumped right into hot oil over BLM and defunded the police in the past summer.She knows nothing of the community she is running for She came from New Jersey and she's a realtor not a politician. She's just jumping in for another paycheck because they will not vote her in again as Allentown Commissioner so what does this really say about Amy Zanelli? If she has such qualifications Magistrate where are they? This would be scary and most destructive. Van Scott all the way he comes with stellar credentials and experience and community interaction where he reside his whole life. you don't have to be a rocket scientist to look at each side's qualifications to know who's better for the job. Goood Van Scott

Let's get this man hired

There is no doubt in my mind that Van Scott is an excellent police officer and a real asset to our community. The only down side to his qualifications is that his strongest asset is he is a police officer. These magistrate positions should not be filled by lawyers and police officers. The position should be filled by the common everyday citizen, Someone with an open mind and not from a fraternity such as the police department. These guys lay their life on the line for their fellow officers. They are too clannish. they believe each other almost to a fault over the private citizen. Van Scott is a great asset to the community and a super great guy. I just can't bring myself to vote for someone who was a prior cop.

I have found it interesting the lack of requisites that exist for the role of district magistrate. I do understand there is a four-week training period after appointment or election. That assumes much, though.

So, having a candidate with the experience and skills of Van Scott is most welcome. Considering all of the things he brings to the table from the entirety of his career, Scott has exhibited a willingness to serve his community through military, law enforcement, and educating youth and adults. These experiences have offered opportunities to work with diverse populations like those he will serve as a district magistrate and instruct a fair application of the laws of the Commonwealth. Clearly, he understands criminal law and the criminal justice system. While these qualities are important, there are others central to the position that can't be taught. Rather they are learned - critical thinking, common sense, and integrity.

Another compelling argument in support of Scott is a demonstrated commitment to his community over the entirety of his career, through serving in the U.S. Army, working as a corrections officer, protecting residents as a law enforcement officer, and educating. Being entrusted with making civil and criminal decisions as district magistrate is another opportunity for service.

How is she the best candidate? Because she has all the funds? I’m glad she can pay her way into politics!!!

LV4All.org will be hosting a Zoom meeting on Wednesday February 17, 2021 from 0730 pm - 8:15 pm. Van A. Scott Sr. who is running for Magisterial District Judge 31-1-06, is looking forward to meeting all the citizens who live in West Bethlehem Wards 10-13,and the Borough of Fountain Hill, Lehigh County. This seat was left open by the late Honorable Judge Wayne Maura.

Van A. Scott Sr. is looking forward to answering any and all questions that the citizens may have.

On Tuesday February 16, 2021, the Zoom meeting link information will be available

Drive-in petition signing this Saturday February 20, from 10-3. At Steelworkers Hall Bethlehem. 53 E. Lehigh Street. You will need to text your address and we will bring out a clip board out with a petition on it for you to sign.
Bring yourself, family and friends that live in West Bethlehem Wards 10-13, and the Borough of Fountain Hill, and sign the petition for Van A. Scott Sr. for District Judge 31-1-06. We look forward to seeing you all there!

Amy is as crooked as it gets. Not sure how she has duped so many people for this long. Please be smart about this vote, folks!

Van Scott changed from Republican to Democrat in Jan 2021. His sign sits in front of the West Side Republican Club in Bethlehem. Many of the lawn signs you see are registered Republicans.
Apparently, he has a problem with honesty and integrity and has bow down to these types of tactics because he is afraid losing.

Van Scott has been a Democrat most of his adult life. He briefly switched to ZR bc , as a retired police officer, he was offended by the "defund the police" movement. His decision to run was prompted by Amy Zanelli's defense of looting as an appropriate response Of course you will see his sign at Republican homes. This is a nonpartisan race, something you extremists fail to understand. Zanelli wants to represent Dems, as you've just made clear. Van wants to represent everyone.