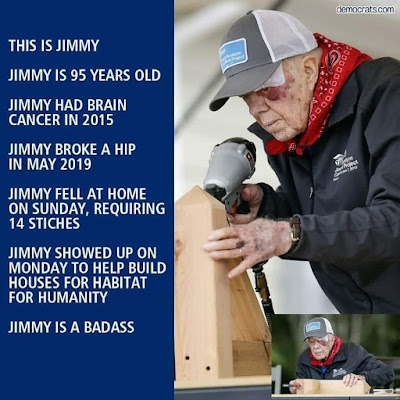 Jimmy is a true American Hero,

Carter is an exceptional human being, certainly a better man than I.

Old school. Similar to the old man I jogged up on X-cross field today. "My goodness, no gloves, no cap, what about your ears?" He replies, " Must be all the years on a farm!" I said "You are old school!" He replies "Because I am old."

Lol. I love being outside in the cold, but I need to have lots and lots of clothing.

Carter a visionary who got smeared by Iranian terrorists. Reagan took credit for hostages release. Carter had solar panels put on the WH roof for cripes sake! Yes he was down home and hokie but still a good man and citizen who was not owned by anyone!

Carter was a poor president but a great ex-President.

Carter was one of the most ethically sound presidents we've ever had.

Ex Presidents do seem to have their reputations quickly rehabilitated once their terms are over... They tend to get re-humanized once out of the Oval Office. Maybe its nostalgia or people tend to focus/remember more of the positives versus the negatives about them.

Curious, if I live that long, to see what 10 years will do for Trump.

And the Trumpster is a poor President as well but will be an even poorer ex-President!

Good guy. I used to think he was one of the worst presidents, but grading on a curve his world was a shit show with the cold war, skyrocketing crime, low faith in government, and a cratered economy. He abhorred war, though, and did everything to avoid sending kids to die. Weird that only he and Trump shared that trait in the modern era.