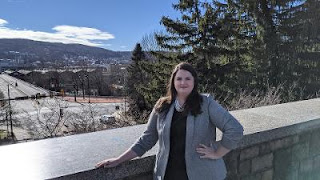 Born and raised in Southside Bethlehem, Knisley attended Fountain Hill Elementary School, Broughal Middle School and Liberty High School. She graduated from the University of Delaware in 2012 and obtained her law degree Villanova University School of Law in 2015. After graduation she returned to Bethlehem and continues to live on the Southside.

While in law school, Jordan worked as a certified legal intern for the Northampton County District Attorney’s Office, preparing legal briefs, conducting hearings and interviewing crime victims. Upon earning her law degree, she served as a judicial law clerk in Northampton County for the Honorable Emil Giordano for two years. During her tenure as a judicial law clerk, she assisted the judge with trial duties in numerous complex civil trials and multiple felony jury trials, including a capital homicide. In this role, Jordan helped write numerous judicial opinions.

In July 2017, Jordan joined the part-time staff of the Northampton County Public Defenders’ Office. She is also the Managing Attorney of Northampton County’s Recovery Court, a program which redirects non‐violent offenders from incarceration to treatment and education. Participants in the program are required to abstain from substance use and to be accountable for their behavior while fulfilling their legal obligations.

In addition to these  responsibilities, Jordan has been an Associate at the Law Offices of Harold J.J. DeWalt, Jr. in Nazareth, Pennsylvania, since August, 2017. In her private practice Jordan represents criminal defendants, custody and divorce litigants, plaintiffs and defendants in contract and landlord-tenant disputes, and victims of personal injury accidents, such as motor vehicle collisions and slips and falls.

Knisley believes her Southside Bethlehem roots, her broad legal knowledge and experience and her dedication to equal justice for all, are what make her the logical choice as Judge Gonzalez' successor.

Is someone competent running for the district magistrate seat that Zinneli plans to run for? It is hard to believe that a better qualified choice will not seek that seat.

I will have a story about that race tomorrow.

Bernie:
Did you hear about this kid Christian Colon who is running for this seat? He just graduated from Pitt law school in May, passed the bar in December. He grew up on the South Side, but his parents moved to Bethlehem Township a few years ago. He was living with them until a few weeks ago when he decided to run for this seat. Kind of an interesting path to take to become an MDJ.
I think Tony or Jordan would be better qualified, but this kid could be a serious challenger.

Christian Colon STILL lives in the Township. Take a drive past his parents' fancy, very un-Southside home on Long Drive and you'll see his fancy, very un-Southside white BMW parked out front all day and night, save for when he's traipsing around the Southside pretending that he lives there. If he's going to say "From the Southside - For the Southside" then shouldn't he be registered to vote in that district? Well, he's not. He's not even registered to vote in Northampton County. As of 10:00am, he is registered to vote in Allegheny County, with a residential address of 1821 Wylie Avenue, Pittsburgh, PA 15219. Even his PA Bar Registration, which he's only had since December 31st - listed his parents Long Drive address in the Township - until yesterday. Now, it lists his address as 1349 Lynn Avenue, which is an old fire station, located in Englesson's district. This kid has zero chance of ever being elected and he needs to stop wasting his and everyone else's time with this ridiculous campaign. Oh, and #DontListenToOlga

@ 10:41--this is 8:45. I assumed there were issues there. My understanding is that one has to reside in the district for a year prior to the election (in this case November 2020). Based on what you are saying, he is not qualified to run for MDJ in that district. Interesting!

You are correct concerning the residency requirement. The earliest he could have hatched this harebrained idea is December 31st when he passed the bar exam, thus fulfilling one of the requirements to hold said office. We know that he lived in the Township then because (among a mountain of other evidence) that is the address that he registered with the Disciplinary Board of the Supreme Court of Pennsylvania. Obviously, this is well beyond the one year cutoff date. Statutorily, he is 100% NOT qualified to be elected. His cringeworthy thirty minute train wreck of an announcement on Facebook live demonstrates that he is 110% not qualified to hold the office. It's clear that he has absolutely zero idea what he is doing or what the responsibilities of the office entail. I almost feel bad for the kid - it's pretty obvious that he's deluded thanks to Olga Negron filling his head with delusions of grandeur. #DontListenToOlga

@ 1:24 He would qualify to run in the district that he actually resides in - MDJ Broscious is up for re-election this year.

Glad I came across this article and read the comments section. Don’t know for certain if any of the information about Mr. Colon is true but it prompted me to do some of my own research and I reviewed his campaign page. After reviewing, I’m inclined to believe that the information about Mr. Colon presented in the comments of this article is probably accurate- for a campaign page, Mr. Colon’s website conveniently omits any practical work experience that would qualify him to be a District Magistrate. It seems to me that if Mr. Colon had any actual, relevant experience to qualify him to be a Judge, it would’ve been boldly highlighted, much like this article boasts for Ms. Knisley. But I did notice that Mr. Colon’s campaign page states that he has had “blue collar” jobs and that he “graduated this past May (from law school) and passed the bar exam in October and I am now running for District Magistrate Judge on the Southside.” Talk about trying to walk before you can crawl! Has he ever even tried a case, represented a client, or worked with the public at all? If he just passed his bar exam a few months ago, obviously not, at least not in a long-term capacity to make him a competent Judge. Mr. Colon’s slogan appears to be ‘From the Southside, For the Southside’, but what can he actually do for the Southside with no realistic work history or experience in his field? If he somehow became Magistrate, he’d actually be doing the people of the Southside a serious disservice, as there are others who are much more qualified than he is. Knowing that he has little to no experience, but that he is still choosing to run for Magistrate Judge makes me believe that Mr. Colon is purely in this race for himself and the benefits of a cushy job, not for aiding the people of the Southside. How arrogant and entitled Mr. Colon must be to think he deserves the job, let alone is qualified. Not exactly traits we need in a Judge. It’s great that Mr. Colon has Southside roots, but that doesn’t mean he should be a Magistrate, at least not until he gets a lot more experience under his belt. I’ve lived in the Southside for years and it’s a great place. We deserve the best, most experienced Officials that we can have confidence in. Not someone like Mr. Colon whose background and intentions are questionable at best.

Christian Colon is an Olga Negron puppet - a dummy, if you will.
Olga Negron is a vocal proponent of defunding the Bethlehem Police Department.
Can you imagine what the Southside will become if he gets into office?!?!?
Lots of luck successfully prosecuting even a minor traffic case if his warped mind has any input!
The simple fact that Colon is being led around by the nose by the likes of Olga Negron disqualifies him.

Colon is also supported by former Fountain Hill Mayor and failed State House candidate Jose Rosado. Colon has called Rosado a mentor. Rosado fancies himself as important and some kind of king maker. He is not. Rosado was fired from his position with a local school district. If Colon is being mentored by Rosado, then the South Side is in trouble.

Why does Christian Colon’s announcement video show 95 comments, but, when when you count them, there are only 94 comments???
Did he delete one? Is he trying to hide something?

He apparently deleted me. I asked him to respond to these anonymous claims. Wanted his side of the story. My guess is he deleted me. I looked for an answer this evening and my comment was gone.