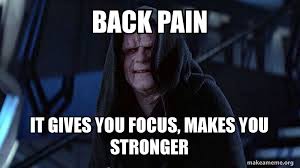 As most of you know, I'm a miserable bastard. Mean as cat shit. When I walk into a room, people walk out. As well they should. I had a momentary lapse of kindness yesterday. Now I am paying a price.

I was on my way to the bank to deposit money I didn't deserve. I spotted an man, flat on his back, in the parking lot at Patient First. He was flopping like a fish out of water with a cane next to him, and appeared to have trouble getting up.

"Are you OK?" I shouted, half expecting he would tell me to mind my own business. His reply, however, was unintelligible.

I pulled into the parking lot, got out and approached. This fellow was able to speak English, but barely. Turned out he had fallen and was unable to get up. He had been with his nephew at Patient First but his nephew had to leave because he was late for work.

I helped this guy to his feet. After all, I'm a highly conditioned, well-trained athlete.

But not as much as I thought. Just as I got this guy up, he began twisting. This in turn caused me to pull my lower back. The old fart went down again and this time I went down with him.

I got back on my feet and, fortunately, was able to enlist help from a visitor at Patient First to get this guy on his feet. We walked him a few feet to some concrete wall, where he said he'd wait for a cab. He asked me to call.

I called the cab company, which wondered how they'd get this guy into a cab. I had no idea. I told them I'd call them back when done at the bank.

I did my banking and returned to Patient First. The elderly guy was gone. I called the cab company. They did not have him. My guess is that someone from his family must have come for him.

As for me, I could barely walk the rest of the day. I was being punished for acting out of character. But I just insulted a few readers and am starting to feel better.

Old ploy when business is slow. Did he slip you my card? I have several people working Patient First locations. My brother owns a tire shop and has fixed many a slow sales month with a few dozen strategically sprinkled roofing nails. Sometimes the wheels of commerce require a small push. Please stop by for a $10 off adjustment, Bernie.

You are, indeed, a poor excuse for a human being.

You should be much, much more humble.

Why the hell didn’t you just go into Patient First and ask for medical personnel to respond?

Yeah, I could have done that, lol.

Not too bright am I?