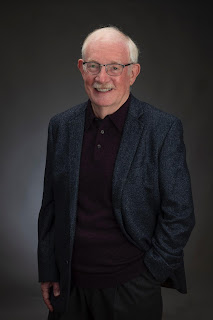 Dana Grubb, a lifelong Bethlehem resident and former City administrator, is running for Mayor. He will announce his candidacy on Wednesday, January 27, 11 AM, at the Steel Ice Center, 320 East First Street on the South Side. All persons at the event must be masked; social distancing will be required.

I first met Dana about 20 years ago. For reasons I'm unable to explain, he liked me. So he's obviously a poor judge of character.

If you've ever attended a City Council meeting, you've probably seen him. He's something of a regular speaker. Like many who sit in the peanut gallery with him, he usually makes more sense than the persons behind the dais. He cares about the City deeply.

Grubb served as the city’s Grants Administrator and Deputy Director of Community Development. He was canned by Bethlehem Mayor John Callahan after a shoving match with another staffer. Because of that, he is routinely smeared on this blog. My own impression is that he is one of the most calm and tolerant persons I've ever encountered.

Dana still works quite hard as an events photographer at Wind Creek and for The Bethlehem Press, where I sometimes freelance. From numerous conversation I've had with him over the years, I believe he's motivated by what he thinks is best for Bethlehem, not himself. This would be the capstone to his career, not a springboard for something else.

At his announcement, he is expected to "lay out the key tenets of his candidacy and reveal some of the principles by which he intends to govern."

Willie Reynolds, who sits on City Council, has announced. Bryan Callahan is being cagy. Joe Kelly is supposedly considering a bid, but he's too lazy. Nancy Matos-Gonzales might give it a go, according to some comments I received here. If she does, she must step down as a mini-judge before she announces.

Sadly, no Republican is running. Bethlehem, though Democratic, has been known to vote several Republicans into office as mayor. This is a missed opportunity.

I don't think an R hasn't been mayor in 24 years (Smith) and he was the only R under the strong mayor structure since Gordon Payrow, 23 years earlier. Given the polarized climate that's dipped down into local levels, there won't be an R elected in Bethlehem in the lifetime of anyone breathing today.

funny....joe kelly, husband and father of three....is too lazy? thats complete bullshit bernie. if he decides not to run, it's more likely related to his desire to be a good father to an infant.

"funny....joe kelly, husband and father of three....is too lazy?" Nothing I haven't said to his face.

why would Joe Kelly take a pay cut? Why wouldn't he bide his time and become the state Senator when Lisa B finally takes her last bow and leaves on retirement?

I have known Dana from our Moravian College days and many years afterward with our involvement with Bethlehem sports - he is probably the most even tempered person that I have ever known - he will make a great leader for Bethlehem.

Kelly is not too lazy...maybe too smart to run, but not lazy.

Grubb chose to retire from the City after a fight with a co-worker, rather than being canned and losing his pension. He showed a significant lack of temperament. He has been a vengeful person since then when it comes to the City.

I met Dana once, probably 2 years ago. He seemed nice, we talked about the City. He seemed to care about the City. Didn't seem like he had an ax to grind. I have also talked to political insiders around the city, they do not give him a chance, but I wish him the best.

Seriously what is this for Willie? He's early 40's? and according to his Linkedin, he's in his 12th year of teaching for ASD... Why give up that career and pension to be Bethlehem Mayor?

Dana is certainly knowledgeable about the City and cares deeply about it - I respect him for that - but he has little chance in this race. He is a relic of 1990s/2000s Bethlehem and, in my opinion, not representative of how the current regime sees things. Reynolds is the anointed one here.

The thought of a Republican running in Bethlehem in 2021 is laughable, regardless of the individual they would have zero chance. Such a candidacy would be a waste of time and money, and I think any qualified Republican in Bethlehem realizes that. Besides the low number of registered Republicans in the City, there is just too much negative runoff from Trump right now.

What is his status at LB office? Just curious if that warrants her job when it is available?

Great news. As long as he still will go out in nature and take photos to share with us he will have my vote.

We got Sleepy Joe. Might as well have Lazy Joe!

Would he not have the opportunity to change the regime?

Mark Diluzio will run as a registered Democrat. He and his wife are currently looking to purchase a home north of Butztown Rd.

I've known Kelly for years. He is extremely bright, great common sense and very politically smart! If he runs I think he would win!. But I don't think he will with 3 young girls. But he would be so much better than Reynolds, who has raised taxes every year he has been on council and is not very approachable or likable. Please tell me Matos Gonzalez will run , because if the choice is Reynolds or Grub, uhg. So sad!

Ive known Joe Kelly for years. He is a very bright and a common sense person. He would be a great Mayor, but with 3 little girls, I don't think he will run. That is truly a loss to the City. Reynolds is like the wind. He won't stand strong for what is truly right for the City and will bow to any pressure or blow back from anyone who shows up to speak at Council.Plus he has raised taxes every year he has been on Council. Grub will get a few hundred votes and thats it. Getting in a fist fight in City Hall with another employee during work hours is not a good thing on your resume. Hopefully Judge Matos Gonzolez will step in and save the City from the other two really bad choices!

I can see why you like him, as it certainly must be difficult to find candidates who like you.

I have known Dana for many years. If you want a truly honest person who will not be bought by outsiders and will get rid of Directors who got their jobs through pollical connections than Dana is your man. He would be the first honest Mayor the City has had in many many years. He loves the City and the people in it. His only concern is their welfare. Just think a Mayor who isn't a puppet what a change that would be!!!!

“I can see why you like him, as it certainly must be difficult to find candidates who like you.” - True. Jealous.

Yeah, look at all the municipalities around the city, it seems like all held the line on their taxes and a few even reduced their taxes! The City Of Bethlehem? Nope, sorry, gotta raise them again!! Plus they cut personnel, like the four firefighters! When they say they don't have money, don't believe them as action speaks louder than words. They pay guys to go out and collect leaves on a holiday....the Friday after Thanksgiving...double time and a half? Then on that Saturday as well? They couldn't collect the leaves on their normal work day and pay rate? How about this past Sunday for the "big Snowstorm" we were to get on Tuesday? They paid overtime for the guys to come out and hitch up the plows Sunday night, as though they couldn't do this on Monday? Oh, that's right....regular pay!! I think Dana will put a stop to all this wasteful spending. He's very much aware of how the city operates, and how they waste money on nonsense! J Williams Reynolds is clueless on stuff. He's trying to make the city go green? Yeah, right. How much CO2 is dumped into the atmosphere driving the great brine trucks around on every street/alley/thoroughfare in the city, and most with multiple passes for a dusting of snow? Waste of money, waste of supplies, and lots of pollution for what?? Fix this mess Dana!!!