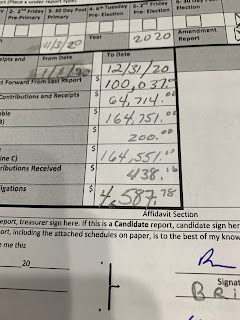 Northampton County Executive Lamont McClure, who is seeking re-election, is entering the campaign with a formidable campaign warchest. According to his latest campaign finance report, he enters the contest with $164,551.00. I am unaware of any Executive candidate who has entered an election cycle with that amount of money on hand.

This report, filed early, is in itself a message to anyone considering a challenge, whether in the primary or general election.

I'd be concerned about anyone who's raising $64,000 for a county race in a year where there's no election.

Where is the money coming from/who does he owe favors to?

Does he really need that kind of money to "inform the public" about anything, since he's already the incumbent and reaping thousands in free publicity from the local media?

Wouldn't it make sense to indicate from whom the money was received?

We know from whence his money comes: all the usual suspects who protect unions and government positions at the expense of hard working taxpayers. Meanwhile, the Gracedale elephant may not be mentioned. He'll get free ads and no mention of Gracedale on this blog.

"Where is the money coming from/who does he owe favors to?"

I have covered McClure's campaign finance since he entered the political arena. I can tell you right now that most of his money comes from trade unions. Since he's been Exec, he's also collecting from the officials he appoints. I have previously condemned this practice, which is followed by most elected administrators. I will be writing a more detailed story about the source of McClure's funding and how he spends it, but will wait until closer to the election. For now, I believe the source of his funding is eclipsed by the amount he has taken in.

"Meanwhile, the Gracedale elephant may not be mentioned. He'll get free ads and no mention of Gracedale on this blog."

I don't know what planet you live on, but I cover Gracedale routinely on this blog. In fact, this site is the source of most of the negative news coming out of the nursing home. So as usual, you're full of shit.

It is an obscene amount. He must be term limited.

His and his administration's actions or lack there of are reasons to get rid of him. Can't wait to vote him out!

Thank you for posting this. I signed up...

How many of his current appointed people paid for their jobs. I would like to know and amounts they contributed for his first election and upcoming.