NorCo Council To Study Turning Gracedale Into a Non-Profit 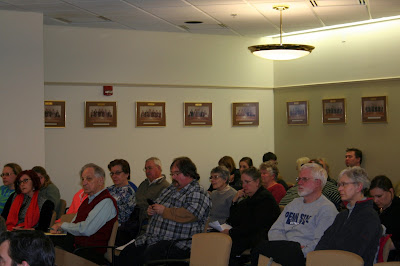 By a 6-3 vote, Northampton County Council voted at their January 7 meeting to authorize a study, at no cost to the County, of the benefits and pitfalls of turning the County nursing home, Gracedale, into a tax exempt nonprofit corporation, commonly known as a 501c3. Gracedale's Administrator, Premier Healthcare Resources, will prepare the report, but has been specifically instructed that it the possibility of a sale to a private, for profit corporation, is off limits.

The meeting took place before a large crowd of both Gracedale and open space advocates. Earlier in the evening, Council adopted a "Livable Landscapes" Open Space Plan by an 8-1 vote. Despite a buzz that this plan would be rejected, only Hayden Phillips, who is philosophically opposed to open space funding, voted against it.

A plan to study the needs at the County's Civil War era jail passed unanimously. Even a study of the controversial topic of reassessment was quickly and unanimously approved.

Peg Ferraro blasted the proposal. "Much has changed in the last two years since you voted to sell Gracedale," she told Council President John Cusick. She added that as a result of the many efficiencies introduced by Premier, Gracedale might soon be earning a profit.

Ken Kraft called the idea "ridiculous" and scoffed at the notion that there would be no cost. "Nobody does anything for free," he warned.

But Glenn Geissinger supported the no-cost study. While agreeing with former Council member Lamont McClure's dictum that Gracedale is a "moral obligation," Geissinger added that "[w]e have a fiduciary obligation to the citizens as a whole.... I have absolutely nothing against learning something for free."

Cusick defended the measure as a way of getting higher reimbursement rates from Medicare and Medicaid, which are denied to publicly owned nursing homes.

The study was approved, with only Ferraro, Kraft and Bob Werner opposed. In casting her No vote, Ferraro called the measure "[t]he first step towards privatization." Cusick then lectured her, "During a rollcall, the proper answers are Yes, No and Abstain."

The return of Jim Gregory can't come soon enough. The savior of the unrepresented will put thing straight. He was instrumental in ensuring that Gracedale was treated fairly last tine around. Hopefully the Mediterranean manslab will be prepared to once again do battle on behalf of the unrepresented poor.

Bernie, please check if it is true he will be out in thirty days. Can you find out the date he is free to return. I hope you get the privilege of doing his first interview. Word on the street is he will be back at county council meetings.
Let us hope that is the case.

To those save Gracedale people and the Gracedale employees, you were warned of this over and over again, even back in 2013, yet you stayed home and didn't vote. Now your false hope of security and laxness will be rewarded by the teabagers. Cusick has a chip on his shoulder and carries a grudge. The results of the study are already in the bag. You will be lucky if even Mr. Gregory can help you at this point.

How was NorCo suddenly become a Ferraro vs. Cusick battle zone?!?

has not was... too quick with too pudgy of fingers.

"She added that as a result of the many efficiencies introduced by Premier, Gracedale might soon be earning a profit."

Projected loses of 10 mil. What?

When are you people going to realize that the County's very existence is providing "Human Services" and funding for the Court System. These Human Services include providing services to the elderly. We voted overwhelmingly to pay for the cost of operating Gracedale and keeping it in the hands of the County. It is a Human Service we don't mind paying for.
Now let's do something about the scum and the scut in our County Prison.

The counties existence is not to supply free nursing care for a few and let the rest of us foot the bill.

This taxpayer funded failure this year is 10 million in the red and every year sinks more and more? Privatize it and sell it and let the families of those there step up and pay some toward taking care of their own.
The gracedale families took the parents money and waited to dump them there and enjoy living off parents assets.

I wish that chip would get knocked off of Cusick's shoulder.

Nobody agreed to keep Gracedale open at any cost. It's operating as efficiently as it ever has, and it still bleeds increasing millions. Most other counties have sold their nursing homes under strict terms that guarantee the care of patients. Nobody is being thrown to the street. While we continue to pay for Gracedale's mounting losses, the prison, courts, and county bridges are neglected. I know Peg was a teacher. But math was clearly not her best subject.

Ferraro was nauseating at the council meeting last night. Grandstanding all over the place about her darling Gracedale. Acted like a dewy-eyed 12 year old. She deserved to be dumped as council prez. She is nearly ready for the Gracedale dementia unit.

Stoffa had the right idea about selling Gracedale. It would have been done in a way to preserve, in perpetuity, indigent admissions. It would have netted the county tens of millions of dollars to help support senior and veterans programs. This whole headache would have been gone for good. Gracedale would have become profitable. A new prison would be under construction. Stoffa tried to do the right thing for the citizens and taxpayers of the county. Too bad emotion trumped reason.

Why was there buzz that "Livable Landscapes" would be rejected?

Any "study" that NorCo orders is a waste of money. They are just looking a pretext to do what they already plan to do.

"Why was there buzz that "Livable Landscapes" would be rejected?"

I have no idea. I had heard nothing that would have led me to believe it was in trouble.

@4:22AM Tricia - please get some sleep. Nobody cares about your convicted buddy or your rants about him. And stop addressing Bernie like he is some friend of yours. We all know the truth. Get some mental help - you desperately need it.

"How was NorCo suddenly become a Ferraro vs. Cusick battle zone?!?"

Cusick is knowledgeable, but untrustworthy. Not the kind of guy you want next to you in the foxhole. His attempt to admonish Peg over her vote is laughable when he himself made a practice of voting "Present."

"Stoffa tried to do the right thing for the citizens and taxpayers of the county. Too bad emotion trumped reason."

Right, what the voters decided to do means nothing. We should all ignore the will of the people who overwhelming made their wished known and follow the orders of sleepy King 'Louie' Stoffa and his buddy Ron 'Richelieu' Angle.

I wonder how much my livable landscape cost. Did we really need that fancy report? The county will bicker over a free report but forgets to ask the lvpc how much it cost to make theirs.