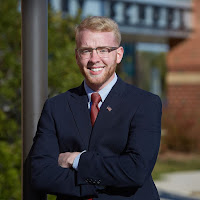 In case you haven't guessed by now, I'm no fan of State Rep. Mike "Darth Voter" Schlossberg. Nominally a Democrat, he's really just another crony capitalist more at home with Fed Ed and Lee Butz than the people he is supposed to represent. Don't believe me? Look at his campaign finance. Though he's never had an opponent, $141,498.54 have still been poured into his campaign coffers between 2012 and 2014. He spent huge chunks of that money on Miked Fleck and, of course, himself. But is that a reason to jump into the arms of another untested candidate who has never held political office or, for that matter, a real job?

Meet Ben Long. He's seeking the Republican nomination in Schlossberg's district, but it's hard for me to be enthusiastic about what appears to be a Schlossberg Knockoff. He hopes to graduate from DeSales University this Spring. He claims to work for his daddy's water technology company, but his Facebook page lists his true job - candidate. He made it official yesterday.

If this is all the GOP has, Schlossberg is going to win.

"I have no interest in being just another politician," he incredulously claims. Since I've known him, that's all he's ever been. First he was Dean Browning's protege. Now he is Bill Heydt's protege. But he really belongs in a seminary somewhere. All he talks about on his Facebook page is God and Jesus. Since I'm in league with Satan, that does not appeal to me.

I'm sure that will get him the Jewish vote.

Maybe he's praying for a miracle.

Ben, please run for student council and try to persuade a grown up from either party to run.

Below is a list of Darth Voter's major contributors, outside of unions. Those on the FBI subpoena list are marked in red.

No shot. This district is overwhelmingly Democrat.

Um, that planning dude from Lower Macungie is his campaign manager?
I'm out.

Ben is a great guy. He is looking for political experience and he will get one here. It will be a real David and Goliath match. If I were a betting man I would wager the farm on the bad guy. Why? Because the bad guys win routinely in Allentown.

Unless this Ben can mimic the facial expressions and speech delivery of Dr. Schlossturd, he has no chance! Schlossturd looks fresh off the runways of Milan accompanied by the mind of a mensa shaman!

Does anyone think those who contribute believe they will get a kick back?!?! Imagine that idea.....GASPS! haha


"Ben Long's Shot at State House Is A Long Shot"

Where are the independent Dems to challenge Schlossberg in the primary?

He looks like the one last charged in the fed ed case from the eastside¿!($
Works now Bernie,how do I Re register from a independent to Republican now¿!($

Ley us replace one young turd with another young turd. This is why you lose elections, Scotty.

Anyone is better than. A person like Mike '. When it comes to money Mikey's likes it. .
When it come to get dirty no problem . BUT when it come to honesty and ethics
His last job helping Your pal FED ED. Must be where he was trained to cheat the public

When I ran for State Representative in 2006 against Joe Brennan , Jose Rosado and Anthony Rybak in the 133rd PA legislative district my concern was both for the preservation of the historic and cultural legacy of the industry, institutions and traditions of my district as well as seeing my district move on to a future which offered a renewal of economic opportunity. In my campaign announcement I said that I was a former Bethlehem Steel worker who knew the plight or circumstances of working people in a weak economy ; That as a substitute teacher I knew the nature of the problems that existed in education. And as a longtime neighborhood leader I knew what were the main concerns of those people residing in the various neighborhoods...At that time the 133rd District included parts of Allentown and Bethlehem and the townships of Salisbury and Whitehall; all of Catasauqua, Coplay and Fountain Hill boroughs; and Hanover Township in Lehigh County... To be honest I was overwhelmed by the three before mentioned candidates ... But I He did win the two east Allentown voting precincts in the district where I had been president of the neighborhood organization for about 30 years. Although I did not move from my present address, through redistricting my legislative district is the 132nd which Schlossberg seeks re-election and Long seeks to be a challenger.. Bernie is right , Schlossberg never has had a challenger so in 2014 when 5 east side districts joined his district we never had a choice for another candidate. In fact, the decision to actually implement redistricting because it had been contested became so late that no one here was prepared to challenge him... Now Facebook described me as both communicative and funny with an open mind ... Now who wants a 68 going on 69 year old man who he has run for political office before but never achieving the goal of being elected but in one election for County Commissioner got 32,000 votes but still lost to make another bid for State representative . But my problem is while I don't disdain campaigning I disdain spending money to do so. I just feel that I would be better in governing then campaigning... While I don't take back the govern statement, I realize that the best intended legislator can be put under water by all the nonsense that occurs in the state legislature.

This guy failed to even serve one year on the South Whitehall Township public safety board, missed the first meeting he was ever to attend.... seems perfect for Harrisburg

Does he even live in the correct district? what is the residency requirements???

Republicans are dreaming if a 20-year-old is going to beat a Muhlenberg graduate.

It is good to see young people want to get involved in the process, whether they are qualified or not. Look what Justin Simmons did back in 2010. You never know what will happen when you try. I expect it will make Mike pick up his game, and I don't think that is a bad thing. The likelihood of him getting crushed is pretty high, but still it changes the dynamic in the race and the district.

It's all in the hands of Jesus.