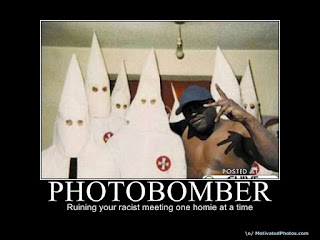 His father, Michael Anthony Radogna, is the erstwhile leader of the "Mountain Dogs" klavern of the Ku Klux Klan. In 1989, he planned to conduct a July 4 rally at his Williams Township home on Island Park Road, complete with a cross-burning. I don't know if the rally ever occurred, bit I used to drive by the property when visiting my parents, and my brother worked at the chemical company next door. There were always strange signs. In 1990, state police found a huge wooden cross burning near his property, though Radogna denied he had anything to do with it.

In 1991, Radogna was Easton Mayor for a day after placing the winning bid in a charity auction conduted on public television.

I'm pretty sure I actually met this guy in 1992, when he was passing out KKK flyers in the Nazareth circle. I tore mine to pieces and threw it to the ground, only to be accused of littering.

Radogna, an avid motorcyclist and marijuana advocate, no longer lives in the area. According to his Facebook page, he now lives in Western Florida.

In addition to the father, there's Uncle John, as in John Vito Radogna. At age 69, he's a resident of State Correctional Institute Huntingdon. John was convicted of killing a man in a 1979 road rage dispute, and sentenced to 26 years. The gun he used had been stolen from deputy sheriffs during an escape from jail. He escaped from jail six times. The last time he escaped, it was when he was released from state prison to attend his father's funeral. Then Sheriff Ken Stocker was forced to resign after that escape. John was caught a month later in Fort Lauderdale.

In the meantime, Michael Radogna was carving a different path for himself in law enforcement. He became a part-time police officer in Wilson Borough and also worked on the Coopersburg force.

He visited South America to learn about coffee, and when he returned, formed Mocha Mike's.At one tome, he had several coffee kiosks throughout the Lehigh Valley.

Radogna's wife Carin is the widow of Easton police officer Jesse Sollman, who was accidentally killed when officers were cleaning their weapons. She settled with Easton for $5 million in 2009.  In 2011, she had the names of her children changed from Sollman to Radogna.

Does anyone else think it's disrespectful to change the last names of children whose Father has passed away. How does that honor his memory?

You could not make this stuff up.
No sir.

Bernie,
You bring up a good point in flordia mention¿!($ Once a hotspot destination for the Bethlehem Steel development Lehigh Hights a development for summer trips and retireries homes¿!($ Now it is a booming community for those that once worked under cover under colur of local law dogs for the notorious hamilton street gang o thugs subsects that now infect from the begining of life to the end of life and every other ASSpect of life in between¿!($ These new coconsperitors and imaginary emplyeeZ have left for this retirement cul de sac after the influence peddling trade off criminal ACTS were completed with the nod and wink from local athorities and crimes commited were negated as a prosicutary discretion¿!($ There is one that I have personal knowledge thereof that involves the circus ACT of institutional sex crimes against clients as they are called in that subcontracted public service entity under human services¿!($ The seperation of state through a few words and or abreveations¿!($
redd for Republican
patent pending

8:01. Dude what is with the stupid grammar and idiotic symbols. I think u have a thought I would like to read, but damn

I forget, why did Jesse Sollman get murdered?

I am stunned. She changed the name of Jesse Solliman's children they had together to her new husbands?? WOW, He must have rolled over in his grave. If that's true its sad, sick and disappointing. Jesse deserved better from her. Life doesn't end for those family members after you loose someone but changing the last name of his kids? just WOW. His tears from the grave will haunt her.

Good lord, this family is almost comically criminal. You couldn't make something like this up.

"I forget, why did Jesse Sollman get murdered?"

He was not murdered. I stated in this article that he died when he and other Easton officers were cleaning their weapons.

"I am stunned. She changed the name of Jesse Solliman's children they had together to her new husbands??"

Uncle John is a criminal. The rest of the family is what I would call very interesting.

@8:01 Dude what is with the stupid grammar and idiotic symbols. I think u have a thought I would like to read, but damn

Your grammar isn't a lot better. No period at the end, and abbreviating "you" as if you are texting someone.

Yes, Redd's posts read like they are written by someone who had a lobotomy, yet he could have something valuable to say. I doubt he is entertaining anyone, and it's a shame he insists on writing the way he does. I don't bother trying to decipher what he writes - I find it more trouble than it is worth.

If you don't like what Redd has to say, or are unable to understand his strange style, just ignore it. I am not going to delete someone simply bc his style is difficult. So long as he is not vulgar and sticks to the rules, his comments will be allowed. But i will delete the anonymous attacks aimed at him.

You go Bernie,
You da man put to print and I just hit the hard ball on MM's and if infact he prints¿!($
The style that redd puts out to read is uncomprehencible demoralization of the very people that are employeed to protect and serve¿!($ Going very well as today the sun shines up out of the hell of ignorance has tried snuff out¿!($

As I have put to print in my craZy style is just to prove a point as well as set presidence of facts and treats as well as ACTS committed by this very circus carried out because of the ringmasters involved as well as OZ behind the curtian of Z's¿!($
Bernie king palumpa will soon be recieving his email as to his criminalty charges patent pending, my thoughts are who and what will be scratching at the browne holes edge trying to keep from going down flush in the big dig of Allentown cistern below the depts of hell¿!($
Havn't redd redd yetbut will upon posting this undescrptive yet very discriptive novol¿!($

^ The creepy blog mentor is back.

There's a lot of unanswered questions about what happened in the Easton Police Department that dark day.

Bernie- I will go on record here right now- Jess was not unintentionally shot . The trigger pull on that HK in safe carry mode was 13 or 13 and 1/2 lbs there is no way even if you dropped it and recovered it, anyone could make the firearm go off. The lying and nobody wants to know the truth -they failed to summon the manufacture ,I talked to them personally. Babies are born that weigh less than this weight-13 lbs- of first round safety position. The city nor the plaintiffs had the manufacturer involved. AND my letter to the CHIEF of POLICE was missing immediately preceding the exit of JESS the one where I volunteered to assist as an ARMY COMBAT SHOOTER .Well -- .We loved that guy. Nobody even produced any evidence about the primer strike . This tells me something.

John Mazzio knows exactly how it went down,
and he's not talking.
A very nasty conspiracy lives on.

Interesting comments Bernie. Ask some of the old-timers about the incident with the Easton Police. Many unanswered questions and many thoughts at the time. The entire cleaning my gun thing was challenged at times. Highly trained men involved in activity you would not do in locker area? Also talk of some sort of confrontation? Rumors about the slain officers wife and arguments about some comments made at the time.

Boy oh boy.
An ugly can of worms here.

When the Thugs in Blue ran Easton.
Millions were spent repairing the damage.

Why would the State Police ,the Attorney Generals office, who led the Homicide investigation into Jesse Sollmans death, Or the Easton Police Department ever want your advise on any of these issues. You are an expert at nothing and are incapable of making any conclusions about this incident except what you decide around the table cooking dinner in the fire house. Stick to making opinions about fighting fires or being a process server as a constable. As far as being an army shooter. Any soldier can compete in those competitions and that title is meaningless as far is this incident.
I know this. Jesse's best friend was in the room where he was killed. If there was even a hint of any criminal wrong doing in this incident, that man would have come forward with that information and an arrest would have been made. This was a tragic accident that occurred during a lapse of concentration of one officer. It should not have happened. Remember. This incident occurred during one of the departments and cities most inept, incompetent administrations ever and the reward system to equally incompetent people was alive and well. We loved Jesse too. The officers of that department would not have allowed a homicide to be unpunished and would have screamed for justice. Please stop pandering to wild rumors or generating issues you know nothing about.
As far as Mr. anonymous believing I know all of the details. How dare you. I would be leading the charge to put handcuffs on the man that intentionally killed my friend. I and the department lost two good men that day in March 2005. One to a bullet and one to psychological trauma. You are an empty head who knows nothing.