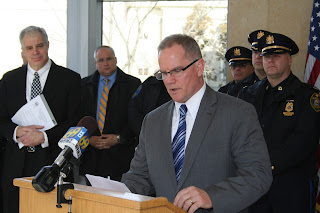 Last week, I asked my readers to rate Northampton County Executive John Brown's first two years in office. Though I fashioned the poll to prevent too much game-playing, I have little doubt it still occurred. It can hardly be considered a scientific poll. But since he wants to be state auditor general, I thought it would be fun to see how readers grade him.

This is something he should consider as he embarks on his statewide campaign.

By way of full disclosure, I should note that I gave Brown a "C."

His performance as Executive improved markedly in his second year as Executive. He still is far too secretive, but has opened up a little. I believe that some of his changes, like reducing worker compensation payments to 66% of a person's salary, were long overdue. Even workers lauded that change. I love his plan for setting aside money for future capital projects, which should avoid the need for an expensive bond. His second year might warrant a high B.

But his first year was a total disaster. He attempted to govern by consultant and used precious tax dollars for a completely unnecessary PR firm. His unilateral reductions in health care benefits were wildly unpopular and resulted in a record number of retirements of the County's very best people. The low point was when he posted armed guards outside his office before a news conference to prevent Council members from attending. His first year was clearly an "F".

Or you could spin it as despite all you negative attacks on the man and leading your minions around by the nose to hate him, he scored over 50% passing grades. You are predictable with your personal feelings. You don't like this guy so you will play up the negative of this silly poll. Meanwhile, I remember other polls you ran to see favorite candidates win and when your favorites did less better than others, you yourself would attack your own poll results.

You know that is the truth so why hide the truth, right>

Brown's actions in the first 2 years cost this county dearly in money lost to law suits and the disruption of services to the residents. He is a slow learner and only recently began to do his job properly and now..he's off on the campaign trail looking for another job when he already has one! Clearly he has been a near failure since he raised his hand and took the office of executive. his priority is clearly now..not NH county. i give him a D and that is being charitable. The facts are what they are.

Ima thinking since in reality he only had 1 Cathy Allen present he faired so poorly. Just imagine what the score would be like with 10!!!!! You betcha!

This blog and most of its posters were certain Callahan would breeze to a win over Brown. This is an online clubhouse for detractors who like smelling each others' exhaust. They were hilariously wrong then. They are likely just as wrong now.

This clown wont be able to get elected dog catcher of Bangor. HIS CAREER IN POLITICS IS OVER. Ill vote DEM just to rid the public of this walking cess pit of stupidity.

The barometer for success of any county executive is how much taxpayer money they return to the General Fund. He's accomplished a great deal, from this perspective, in a short period of time without any layoffs. Compare the amount returned to the general fund less the few dollars spent defending lawsuits and Brown is still head and shoulders above the apathetic dinosaurs that occupied his office prior to his tenure. While other counties were cutting services during the state budget debacle, Brown's financial acumen allowed Northampton County's services to be delivered to its residents without interruption. I understand the disdain many share for his politics and methodologies, but the results his administration has generated have benefited the residents of the county. Need more proof? Take a look at the financial state of the county the day he took office and compare it to the present time. Dont forget the majority of the funds in the general fund the day he took office were actually borrowed money. Do the math and then judge the man.

He saved us from the bungling Stoffa, so he gets at least a C for that.

Hey 10:30 am a.k.a.Cathy Allen , you should get a raise for that post. You haven't received one in at least a month.

He would have won if the turnout was better. The $50,000 Brown got from NIZ Kings JB Rellly and Joe Topper, all of which was orchestrated by Fed Ed, is what gave us Brown.

"The barometer for success of any county executive is how much taxpayer money they return to the General Fund."

But Stoffa would tell you that is a false reading. The true reading of a county exec is how effectively he delivers county services. Brown's rating is pretty bad thanks to manpower shortages.

Let me give you an example of a good county exec. Many years ago, when he was Exec, Gene Hartzell decided to keeo offices open on Tuesdays for an extra hour. That was so that people who worked and who had courthouse business could schedule a visit. Some people would come in an hour later and stay an hour later. It worked very well.

That went away under Reibman, in what I thought was a mistake.

Year one wasn't so great probably a D-

Year two has been improved. Ill say a B.

I have no interest in him as Auditor General and will not support him at this time. I would much rather have him finish out his term to see how I will truly grade his performance.

FYI- I voted for Brown and tried to convince other people to do the same by the way.

He didn't need to lay anyone off. His grand plan was to create a culture of discontent by treating his "most valuable assets" like shit so they would leave in droves. It worked. Shameful.

John Brown was a horrible mayor in Bangor in an even worse county executive in North Hampton. His administration is a joke and has done damage to the county that will take decades to repair. He was and remains not ready for prime time. The idea that he is now going to travel the state wide and run for auditor general is an offense to the county tax payers. Try to to go your job first John you've got a lot to learn.

10:01 AM said "his administration is a joke and has done damage to the county that will take decades to repair". after reading that I thought he was talking about the bush or obama presidencies. my bad. that statement could apply to 99% of the politicians today on every level. And there you have problem number one.
here is a simple rule of thumb about politicians. they all suck and can not be trusted. Not only do most politicians suck, the political parties they represent, the delegates/groupies/sheep, and the media, who like tell people how to vote based on biased opinions, also suck. and there you have problem number 2.
All of the above, could careless about your concerns ,unless you are a political bundler, donor, crony capitalist or special interest hack group. When the politicians from both parties, had to spend a billion dollars EACH to play the game, that's all you need to know about a politics. and there you have problem number three. God Bless America.