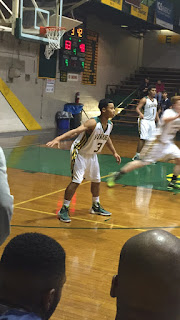 On paper, this should have been a blow-out. Easton has won only three games this season. Central's young boys basketball team is 10-4 and is on a four-game winning streak, with big wins against Allen and Nazareth. But nobody told the Rovers they were supposed to lose, and they came out on fire. I noticed this in the JV game, in which Central was stunned. Unfortunately for the Vikings, the Varsity was just as pumped.

Central lost the first, second and third quarters. It's been hampered by the loss of sophomore Shack DeZonie. Recuperating from a concussion, he's had to sit out the last two games and may have to sit out one or two more before he's cleared. Central could have used him last night.

In the end, what saved Central were Aiden Elwood's 3s (he had 5 of them) and Zay Jennings' free throws (14 for 16). In addition, both of these players were big on rebounds (Zay had five and Aiden had 6). Tim Susko also galvanized the team with a crucial steal, three rebounds and a crucial free throw.

Free throws by Dat Lambert and Zay Jennings in OT iced the game.

Dat had quite a few fans last night. His mom and sister are his biggest fans, but two of my friends came to watch him and Central play tonight. NorCo Fiscal Affairs Director Jim Hunter, who claims to be an Easton fan, has been spotted with a Central finger.

Blogger's Note: I shot what I thought was a great video of Easton's terrific band. But my fat finger blocked the view. In the meantime, here's a shot that Dat's friend Danny took of him during the Dieruff game.
Posted by Bernie O'Hare at 1/13/2016 12:00:00 AM

Central Catholic sports is in the dumper since and has been for close to 5 years.
I am more impressed with their graduation rate of 99-100%. Nobody will upend Parkland for the title. In fact, I believe we are looking at a Parkland team who is ready to make a deep run into the state tourney. This is a very special team .

58-54 was the final, but then again what's 1 pt. Amazing how everything is Central,Central, Central in the post. No mention of any players from Easton hmmm. Apparently Easton didn't do anything right to keep it close , only that Central was missing one player. for those who don't know Easton freshman won by 60, yes 60 and are currently unbeaten. I'm sure Beca recruits are watching. Saw one there last night. lol

I did not mention Easton much bc i only know one of their players. Obviously, Easton played quite well and I really like their boys. I justdon;t know them or see them often. Sorry.

"Nobody will upend Parkland for the title. In fact, I believe we are looking at a Parkland team who is ready to make a deep run into the state tourney. This is a very special team "

I thought parkland was over-rated at the beginning of the season and couldn't possibly be as good as they were last year. I was wrong.

Parkland is a D3 college team playing at the High school level this year. Once this group graduates, things appear to be changing for the Trojans . They will still be a good team in the next few years, but not like what this group has done over the last 3-4 years.
The previous writer is correct, Easton and Central are both young and have a promising future. Easton has a group in the 8/9 grades that are very good. If Easton's JV was split into much of the varsity roster, they would be very good as well like that when they were at the freshman level last year.

I watched the JV team play and they were very good. I know Trevor Storm and he is excellent, but he's the only one i know.

Parkland lost to Roman Catholic 80-38. I don't care that football players weren't there. Parkland is not beating district 12. same for most of the other classes. Ihmotep in AAA. etc

Don't confuse the private schools in District 12 with public schools across Pa. God only knows where these players come from. Parkland is much improved since they have gotten their footballers back. It is not the same team that you may have seen earlier this year. And please understand I'm not a Trojan fan at all. Just sighting the obvious.