Morganelli and Martin Team Up on Digital Forensics Lab 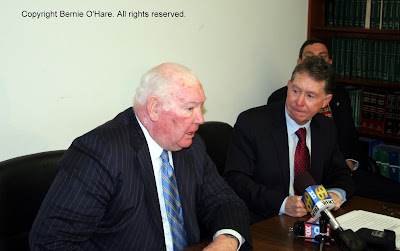 Lehiogh County DA Jim Martin and NorCo DA are both excellent prosecutors with completely different styles. Morganelli is a litigator who likes to try his own cases and send messages to the bad guys with effective and quick justices. Martin is more of an administrator, but has proactively developed numerous task forces, a regional crime center and a digital forensics lab.

With Martin at his side, Morganelli announced yesterday that Northampton County is signing on to the digital forensics lab, located at DeSales University. Martin established this lab in 2011 with funding from a memorial foundation set up in honor of Upper Saucon Police Officer David M Pezold, who lost his life in the line of duty.

In Northampton County, when police want to analyze cell phones or computers, the items are shipped off to the state police, which has a current backlog of eleven months. With that kind of delay, the dated information becomes far less valuable. But according to crime lab manager Paul Iannace, that backlog is one month or less at the DeSales lab. In addition to two full-time employees, the lab is manned by interns from various colleges, as well as police officers. "From harassment to homicide, we can investigate it all.

Martin has made these services available when Northampton County police officers have asked for help. BUT Morganelli has now agreed to help fund the operation with $40,000 per year, and several Easton police officers have volunteered to assist in operating the lab. Martin will retain overall control.

Martin called the arrangement a "win-win for everyone in the law enforcement community."

Though the two counties are working together on a digital forensic lab, Northampton County has yet to commit to the Regional Crime Center, which has been credited for solving several homicides and other crimes. Martin believes a regional crime center is the most sensible approach to a transient criminal community whose crimes dot along the thruways in both counties.

When he was Sheriff, Randy Miller actually opposed the regional crime center. Morganelli has been concerned about cost, but supports the concept and would be happy to see it funded from the $1.2 million in table games revenue that flow into county coffers every year.

Bernie,
With the original ruling entity being on board with this tecknology¿!($ There is but one question, is the notoriou hamilton street gang o thugs named on this gagetry, and than does one have to file a RTK request to see this gangs ranks¿!($
I am sure like most of the media outlets wfmz/gag this locally home grown gang has been ommitted from this statistical tool employeed by none other than the actors¿!($ The influnce peddling and nue nue nue yet same old jabronies prevail in this criminal enterprise of reprehenciblity of this collusinary tool¿!($
Come come to be safe and free from prosicution and do a little dirty deeds for us and we will send you to retire with palumpas pension package procurement ×2 claiming to be a cure yet the evidence of it being the original cancerous infection still plegueing this county seat¿!($ The failing circus must and will continue to propogate its shell trix upon the public¿!($
redd for Republican
patent pending

The topic here is regionalism, two DAs working together and a digital forensics lab. i have deleted no less than six anonymous slurs at Jim Martin which prove why he had no choice but to sue the Blog Mentor. That matter is in the middle of discovery. The Blog Mentor lost his attempt to have the case thrown out, despite the lies he tells on his Facebook page.

I did copyright the pic to prevent it from being abused.

Is anyone going to look into Da Morganelli's son getting arrested for DUI? Over .16 hearing coming up at the end of january before DISTRICT JUSTICE TREXLER.

The above comment comes from the Blog Mentor, who is angry that Morganelli invited Martin to a news conference and publicly thnked him for his role in fighting crime through technology, which includes both a digital foirensic lab aned the regional crime ceneter. Because he is angry, he drags Morganelli's adult son into the picture. This is typical of his style.

This is no secret. It is a matter of public record and media sources were aware of it when it happened. I consider the sons and daughters of people in public office to be noncomatants, civilians, private people. Off limits. I do not generally write about their legal entanglements unless it is relevant in some way to the elected official. If there was some indication of favoritism, this might be relevant. But quite the reverse seems to be the case here.

The Blog Mentor, in contrast, delights in attacking not just the elected official, but also goes after wives, husbands and family members.

It's this sort of innovative public service and dedication to duty that has won DAs Martin and Morganelli so many well deserved re-elections over many years.

Many thanks to them.

Hey Bernie
That is the regionalisms subsects tactiks as to there acts ommited yet committed and put to print as a public service to do diservices to the public as a hole¿!($
Just a qwick thought put to print is there a public of fitting the description of the writter that writ that infamous document or will the reel writter be stepping out from behind the curtian with OZ¿!($

Very sorry bernie but you have become the owner of the snakeoil juice the same false sack o goods sold by allentowns elite except in a bottle¿!($
redd for Republican
patent pending

bernie, i note that this post refers to using the lab for harassment cases, and the comment section mentions the blog mentor. unfortunately, my blog has received thousands of anonymous insulting comments, meant to harass and intimidate me. i believe that these comments are sent by the blog mentor, every day, to each post.

MM, There is no question you are being criminally harassed. I get comments on this blog attacking you as well. It's nice to know that a facility exists to deal with these new crimes that have come with the Internet. I will discuss this with you in more detail back channel. I would prefer not to discuss here for obvious reasons.

As a former forensics staff for the OCME/State of Maryland I can say this lab will essentially "pay for itself" in short order. Congratulations to all who worked to make this good thing a reality!