Minimum Wage Increase Would be Raise to 65,000 LV Workers 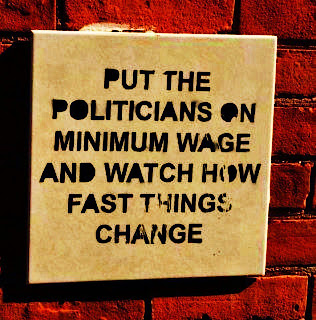 From CACLV: - The Keystone Research Center today announced the release of a new report showing the impact of increasing the Pennsylvania minimum wage from $7.25 to at least $10.10. They studied the impact on all 67 PA counties. A $10.10 minimum wage would give 65,382 workers a raise in the Lehigh Valley and boost the state's sluggish economy, according to the report. For Lehigh County, a boost in the wages of 35,582 workers would increase total wages by $52.1 million; in Northampton County, increased wages of 29,800 would increase total wages by $43.3 million.

In the region, which includes Carbon County, women working who would be affected by an increase to $10.10 per hour outnumber men. Consistent with state averages, the typical worker in Lehigh and Northampton counties who would get a raise is an adult, over the age of 20, working full-time.

"When workers can pay their bills, the whole economy thrives: the landlord hires contractors, the contractors go out to dinner, and the servers buy clothes. It's time we realized we really are all in this together," said Alan Jennings, executive director of the Community Action Committee of the Lehigh Valley.

While workers in several industries call for $15 an hour and the right to join a union, advocates say that the state should ensure that every worker in Pennsylvania makes at least $10.10 an hour.

The advocates called on state lawmakers to increase the minimum wage to at least $10.10 for all workers, including tipped workers, and tie the rate to inflation, as well as increase the fines for employers who commit wage theft against their employees and strengthen enforcement efforts.

Across the state, wages are so low that hundreds of thousands of workers are living in poverty. In the Lehigh Valley, more than 1 in 5 homeless heads of households are working. These low wages are not just so low they result in hunger and homelessness, but they are stalling our economy and hurting communities. It's time to update the wage floor so people can meet their basic needs, like food, medical care, and gas.

Increasing the minimum wage to $10.10 would give over 1.2 million Pennsylvania workers a raise, according to the Keystone Research Center. It would put nearly $2 billion into the state's economy. The benefits would be felt throughout Pennsylvania, with nearly one in four workers in the state's 48 rural counties and more than 700,000 workers, or 18 percent, in the state's urban counties getting an increase in wages. In addition, more than 200,000 people in each of Philadelphia and Allegheny counties would get a boost.

"More than 80 percent of workers who would get a raise by increasing the minimum wage to at least $10.10 are adults age 20 and older, not affluent teens with after-school jobs" said Mark Price, an economist with the Keystone Research Center. "Raising the minimum wage would also help close the wage gap between women and men -- nearly six-in-ten workers who would get a boost in pay are women, including thousands of single moms."

The PA minimum wage has not been raised since 2007, which is stalling our economy and harming communities. Today, a person working full-time making the minimum wage has an annual income of only $15,080, which is below the poverty line for a family of two. To make matters worse, the wage floor has not kept up with the rise in consumer prices. As a result, the minimum wage is 23 percent lower today than it was in 1968.

Compared to other states, minimum wage workers in Pennsylvania are falling behind. Already 29 states have increased their minimum wage above the federal government wage floor of $7.25, including all of our neighboring states, Ohio, New York, New Jersey, Delaware, West Virginia and Maryland.

"No one working full-time should have to live in poverty or rely on emergency food pantries to feed their family," said Janet Ney, of the Second Harvest Food Bank of Lehigh Valley and Northeast Pennsylvania.

The failure of employers to pay fair wages is creating stress on working families and forcing taxpayers to subsidize corporate profits through increased costs for social programs. Wages for low wage workers in Pennsylvania and nationally have stagnated in the past six years. Lower waged Pennsylvania workers have lost $.24 per hour or 3% relative to inflation since the last increase in the minimum wage in 2009.

"The hardworking people who serve our food, clean our hotels and care for our children deserve a raise," said John Dodds, of the Philadelphia Unemployment Project. "Working families are the engine of our economy, but they haven't received a raise since before the Great Recession. It's time to do the right thing by raising the incomes of 1.2 million Pennsylvania workers, which will boost our economy and strengthen local communities."
Posted by Bernie O'Hare at 4/22/2015 12:00:00 PM

10.10 is a very fair number. It's not going to cost much and it will be a huge boon to the economy.

This is a real job creator.

At the current rate, a full-time minimum wage earner, filing as an individual, will pay somewhere in the area of $1K - $1.5K in income taxes on annual income of $15K. $10.10 still isn't much and a significant chunk will be a windfall for wasteful government. Any raise in the minimum wage should also eliminate the majority of income taxes on it. Politicians talk a good game but still grab their share before everybody else. I know the poor pay less taxes. But why is government taxing poor people at all? A hundred bucks a month in take home pay is a lot of money to the working poor.

"A $10.10 minimum wage would give 65,382 workers a raise in the Lehigh Valley and boost the state's sluggish economy".... except for those laid off because thier employer could not afford it

Bermie I find out there IS NOT AN across the board raise for clerks and others on NorCo payroll. Did somebody renege on this? Also I find that The Easton School Board created a position for a principle to be in a new "ACCOUNTABILITY " office that was never in budget . This sounds like fraud to me, tax payers are getting fleeced.What is Mr. Furst going to do for a living?

Minimum wage laws since the 50s have only served to increase and maintain significantly higher unemployment among unskilled teens and minorities. Increases in the minimum wage are pushed by big money labor and fronted by well-meaning folks. The result is structurally harmful and quite discriminatory. It creates a disincentive for low skilled individuals to become more skilled and more ready to assume better jobs. It's an unintentional race to the bottom.

@6:52
You need to stop parroting the right. There is far more published research and studies that show minimum wage increases have had no effect on unemployment.

Not true. When minimum wage laws were first enacted, the gap between national unemployment rates and those of teens and blacks, widened considerably. The gulf has remained since. Will a new raise make this any better or worse? No. The unfortunate gap will remain as it's been since the 50s. That's what most studies conveniently ignore. But hey, they're only blacks and teens who don't vote, right?

Yeah lets return to the good old days of the 1910's. Good Grief people even Henry Ford said you have to pay a living wage or you are nuts. Employers will pay you less if that what you want. Hell the employer will pay as little as possible. You people are dense.

Just how fucked in the head are some of you nuts. I am sure king Louie would have loved you in France. When Marie said, "let them eat cake", you guys would have been all, "why cake? those freeloaders should be eating tree bark"

No wonder this country is goi8ng to Hell in a handbag. You people are just stupid. Sorry but anyone who purposely goes out of their way to bend over and fuck themselves after getting fucked by others, is just that, stupid!!

If I owned a small fast food the incentive would be replace counter people with kiosks. Hand cups to customers to self fill. Get automated cooking equipment. Contract out for services such as cleaning. Keep my employee numbers low. Avoid obamacare and extra wages.

At least I could keep prices low for the underpaid that won't be able to afford the buck a meal increase at places that don't take initiative.

Increasing the minimum wage will really work this time! If we set it to $10.10 an hour we will never need another minimum wage increase right?

Minimum wage jobs will always be minimum wage jobs and will always not be enough to pay the bills and live comfortably. You will get a short time where things will be better, and then the cost of everything will adjust to reflect current wages. That is just the way it is.

Fast food workers in several Marcellus shale drilling towns start at $12 per hour because that's what the market requires to fill those jobs. Nobody had to legislate a minimum. It just magically happened as the economy boomed.

Now - back to your regularly scheduled anti-fracking diatribes.

6:20 You are a dope! I dont even have to back up my comment because your dumb comment backs it up for me!

When I was a kid in the sixties I earned minimum wage which was enough to buy a car and pay bills. You old shits embarrass me. You are living in a past that doesn't exist.
Did you leave your brains in the 1970's?