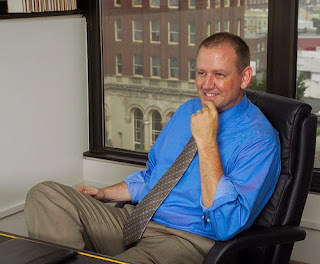 If you know anything at all about Scott Ott, you most likely know him as "ScrappleFace," where he presents "News fairly unbalanced. We report. You decipher." He tells me he's part of the new media. He's also running against Lehigh County Executive Don Cunningham. He's upset that Cunningham ignored three requests to meet him last night for a debate at Muhlenberg's Moyer Forum.
In a news release, the normally affable Ott fires away with zingers like this. "Don Cunningham traveled the state for a year and a half, drumming up support for a planned gubernatorial race. He has more than $700,000 in his campaign war chest, but apparently he now lacks the time to drive seven minutes from his office to Muhlenberg in order to defend his record for the people of Lehigh County. Perhaps if we held the debate at a $500 per plate dinner for Philadelphia attorneys we could get him to show up, since we know he likes those."

"The residents of Lehigh County face a major tax hike in 2011, and Don Cunningham won’t say what he plans to do about it. His self-generated reputation as a fiscal conservative masks the reality of a budget that’s $19.2 million out of balance, reserve funds that will be utterly depleted in 2010, and an abject failure by Cunningham to make significant spending cuts. He’s been living high off Jane Ervin’s 70 percent tax hike, but in 2011 the party’s over and local residents get stuck with the bill.”

Cunningham's refusal to debate is bad for democracy, but unfortunately, it's also smart politics. As Ken Petrini astutely observes, "You can understand why Cunningham is reluctant to debate—he gains nothing. He has a wide lead. A debate between a clear front runner and a challenger can only help the challenger."

Ott goes on to complain about state for pass through money, suggesting that Lehigh County reject it. In a recent op-ed, he said we should move charity "out of the arena of entitlement and back to the realm of love." I'm sure that's music to a conservative's ear, but it also reflects a basic misunderstanding of county government. The state mandates most of these human services and funds the lion's share - approximately 80% - of the cost. Rejecting this pass through money, as Ott suggests, means Lehigh County would just have to fund these required services itself. County tax bills would instantly quadruple under Executive ScrappleFace. That's one hell of a price to pay for making a point with Harrisburg.

It's easy to dismiss a guy when you're pissing down your leg in fear of debating your smoke and mirrors financing.

Cunningham has a Trojan Horse whopper of a tax increase coming for those who refuse to look beyond election year politics of a guy who refuses to defend his shaky record.

"It's easy to dismiss a guy when you're pissing down your leg in fear of debating your smoke and mirrors financing."

Scott should not give up on this banter. Scott should stand on street corners with a sign, "Debate me now, Don." He should buy T-shirts with the slogan. Keep it up Scott, you're on to something.

Nice guy despite the fact that his tie is to long.

New talk of a 2011 tax increase is creeping into local conversation. Some say it is being kept quiet until after election.

"New talk of a 2011 tax increase is creeping into local conversation. Some say it is being kept quiet until after election."

It's coming out of Browning and Daugherty camps. they said it during last year's budget season too. they are trying to keep it quiet until then b/c if it becomes part of the conversation now, the R's will lose the majority. Don has nothing to lose in proposing it now except a few votes that he can afford to lose. his opposition has no money or name recognition. he would pick up some votes, but not enough to make it much of a race. It's the R's that are afraid of officially becoming irrelevant.

Bernie wrote: "I'm sure that's music to a conservative's ear, but it also reflects a basic misunderstanding of county government. The state mandates most of these human services and funds the lion's share - approximately 80% - of the cost. Rejecting this pass through money, as Ott suggests, means Lehigh County would just have to fund these required services itself. County tax bills would instantly quadruple under Executive ScrappleFace. That's one hell of a price to pay for making a point with Harrisburg.

Scott Ott says: Bernie, perhaps I didn't make this clear in the column, or in my interview with you. Let me try again.

I oppose using local property tax dollars to cover unfunded state mandates. I also oppose going to Harrisburg to seek additional funding for ongoing programs here in Lehigh County for two reasons.
1) Pennsylvania is broke, and we don't save money by getting Gov. Rendell to pay for it, we just move the locus of responsibility from one set of politicians (local) to another (state). Ultimately, the tax bill still winds up on the same kitchen table, perhaps with a different return address.

2) Increasing our dependency on remote funding sources not only reduces local liberty and autonomy, but it also puts the poor and needy in our community in a dependency relationship with an unreliable, virtually unaccountable entity...the Commonwealth of Pennsylvania.

Our nation has gone so far down this road of increasing dependency on remote control government and decreasing accountability for 'bring home the bacon' politicians, that it's hard to imagine the return of individual responsibility and a kind of neighborly charity that pairs love with accountability. But that doesn't mean it can't happen, it just means that we need to elect folks who have such principles, combined with imagination, commitment and boldness.
http://www.VoteScottOtt.org

Scott, thank you for stopping by to participate in the discussion. You oppose going to Harrisburg to seek additional funding for programs. I'm unaware that LC does that. There was an instance not long ago in which some grant money for trees was rejected, at least initially. But those do not amont to a hill of beans and stopping them would not result in any real savings to a LC taxpayer. If the county rejected all the pass thru money coming from the state, it would have to quadruple county taxes. You would not favor that, would you? So you are not really against all pass thru grants?

Ken Petrini has been talking about a 2011 tax increase at his blog. It appears inevitable.

Mr. Cunningham is proud of his record of securing this 'no cost' money from Harrisburg, and has even attributed it to his relationship with his old boss, Gov. Rendell.

Don Cunningham is not unusual. Harrisburg teems with politicians like Mr. Cunningham, who arrive hat-in-hand so they can return to their local constituents with funding that comes without raising local taxes.

But taxpayers are wise to this shell game. They understand that, one way or the other, the money comes from their pockets.

I have not suggested that I would reject state-mandated programs that are fully funded through the state budget.

I have said I would reject unfunded mandates, and that I would not join the parade of politicians begging for more cardboard checks from Harrisburg.

It is mathematically impossible that folks from 67 counties can send their money to Harrisburg, and that our local politicians can all then go there and retrieve our 'fair share'. The current system of funding human services is broken. Those in Harrisburg won't change it. It has fallen to 'we the people' to stand up against this taxation without representation that keeps our most vulnerable citizens dependent upon unreliable remote funding, and keeps our working people spending most of their productive hours funding the misguided Utopian dreams of career politicians who see incumbency as their ultimate goal.

"I have not suggested that I would reject state-mandated programs that are fully funded through the state budget.

I have said I would reject unfunded mandates, and that I would not join the parade of politicians begging for more cardboard checks from Harrisburg."

Scott, thanks again for jumping on here and explaining yourself. I think I understand. So we are clear, this is largely a symbolic gesture that does nothing to reduce LC taxes. Wouldn't you be more effective in reducing this state grant money if you were in state office?

If you want to prevent tax increases in LC next year, you'll have to do more than eliminate the quality of life grants that only make up about 0.2% of the budget. You'll have to slash personnel costs. How do you plan on accomplishing that in a county at its lowest employee level since 1990? Are you proposing layoffs? Do you favor the elimination of some offices? Can you guarantee that county services won't suffer?

Perhaps these questions are unfair or rude to a candidate for public office. If you'd like to sit down and talk, I'll be happy to do so. I don't want to box you in. I do appreciate you particiapting in this discussion.

The big tax bomb is coming. Keep pounding on it Scott. It's the reason he's afraid to debate. The empower lacks clothes and guts. Go Scott.

It's "emperor," and he is quite naked.

Get ready to pay for the Cunningham years.

Daaaaahn will set the record straight when he's grilled by the League of Women Voters.

No wonder Bernie loves the girl.

"The empower lacks clothes and guts"


but the emperor does, at least, have spell-check.


no, a coward is someone who attacks others without disclosing their own identity.