Who Are The Tony Phillips Screwdrivers? 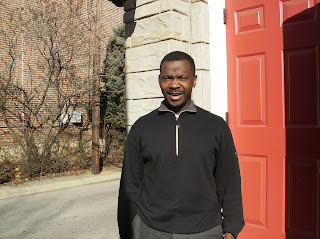 Last summer, we all had a good laugh at the expense of Allentown city council VP Tony Phillips. Remember? He was caught in the early morning hours at Bucky Boyle Park's playground, talking to a woman long after the park was closed. We had a hoot over that. Funny thing. This playground caper occurred on June 29, yet was never reported until July 11, and not by a newspaper.
Keystone Politics - a Democratic leaning news aggregator, did the honors. Of course, I quickly followed KP's lead. I suggested that Tony - a wrestling referee - was probably just showing this woman some new moves. Hee. Hee. KP described her as a "known prostitute." Chris Casey went a little further, claiming Phillips' companion "has a criminal record as a prostitute." Someone on Casey's site then huffed that women are "creeped out" by Phillips. You can see a picture of him above. He doesn't look that creepy to me, but he sure looks black. The Morning Call finally decided to report this escapade on July 13, two days after it hit the local blogosphere.

Well, as all know, no charges were ever filed against Tony or his female companion. None were needed. He had already been publicly crucified, and I drove in a few of the nails myself.

One thing always bothered me about this story. Do you honestly think, for even a second, that Keystone Politics sends staffers to check local police department blotters? If they do, they've missed some juicy stories involving political figures over the past year. I know a few myself, but don't like writing about DUIs, even when they involve local hotshots. So how did KP get this little ditty? Obviously, somebody leaked it. Someone wanted to smear Phillips.

Over the weekend, I ran into Tony Phillips at the Allentown Speak Out Forum. It's the second time I've met him. Contrary to what I expected, he's actually very well-spoken and informed about his local community. He may not be on a first name basis with Lee Butz, but seems to know a lot of Allentown's less affluent citizens pretty well. They don't seem "creeped out" by him at all. Although it's yesterday's news, I asked if he would mind telling me his side of the story, and he did.

Phillips is a twenty-two year veteran of the Allentown police department and a life-long Allentown resident. He's a Moravian grad, and is teaching in Philly. He's also a victim of racial discrimination, and I'm playing no race card. This is documented extensively in a federal district court opinion. Phillips was forced to work for over ten years with an officer who wore a swastika pin on his uniform and made racist remarks. When he finally complained, he was subjected to retaliatory harassment. This included false accusations about smoking marijuana on duty, later admitted to have been fabricated. He'd come on duty to find a severed and blackened doll's head attached to his cruiser's steering wheel. Just a practical joke, they said. Despite this hostile work environment, Phillips was still cited for heroism.

Obviously, Tony was a thorn in the side of officers who think swastika pins are cute. And although he's a Democrat, he bluntly told me he's no "team player" for Mayor Ed Pawlowski, either. He's been called a "chowderhead" and "halfwit" for opposing Allentown's bond refinancing scheme. He has criticized the $73,000 salary paid to the city's information technology director. He opposed a 54% payhike for Allentown's next mayor. He stood up for suffering Hamilton Street merchants - most of them minorities - when they were thrown under the bus by LANTA. He dared complain when the city tried to get a special booze license for Johnny Mañana's - an upscale nonlocal eatery that will send all of its profits out of the city - while thumbing its nose at less trendy establishments. Worst of all, he was highly critical of Democratic operative Peter Wernsdorfer as Allentown Director of Public Works. Wernsdorfer is no engineer or city resident, but is politically well connected. Phillips dared speak against our political spoils system.

So when Tony was caught in a playground this summer, someone took advantage of the situation. Newspapers, for all their flaws, can usually tell when someone is trying to spin them. But we bloggers are more naive. In some cases, we ourselves are active participants in the spin cycle.

Here's what Tony, a married father of four, tells me. The woman in question is a friend, a person he's known since 1972, and she was having some personal problems. He actually attended classes with her. She's a local, too. Contrary to what we told you, Phillips claims this woman has no criminal record as a prostitute. I checked myself. Since 2000, this woman has had four parking tickets and six minor prosecutions involving her children. No prostitution charges. After the incident in question, police visited this woman at her home no less than three times in an attempt to have her implicate Phillips.

Tony Phillips was definitely screwed. It just wasn't by that woman. Who is the Phillips screwdriver? Could be Allentown cops who like swastika pins. Could be city administrators who hate being questioned. Could even be goofy bloggers like me.
Posted by Bernie O'Hare at 1/28/2008 12:00:00 AM

Bernie, I see you got the time machine working again.

Good job posting this. We rarely get to hear both sides of things.

Thanks, AJ. In hindsight, I think we were set up.

Bernie, what really bothers me is the back room machinations to get the woman to say Phillips was soliciting her. I won't move from my assertion that the circumstances were bad judgement on Tony P's fault, but I am troubled by the appearance of political motivations to marginalize Phillips. How high up the chain of command did that come from? That's a question worth asking.

Chris, I'll agree it was dumb. But I wish I had known then about how Phillips had been harassed while on APD. I wish I had known a little more about A-town politics at that time. I think we were played. I just don't know who was behind it.

"Who are the Tony Phillips screwdrivers on the APD?" is an excellent question that needs to be answered.

And I wonder ... could the Tony Phillips screwdrivers be the same folks who screwed Officer Michael Kenderski?

You are gullible assholes!!

I plead guilty to both charges. I am both gullible and an asshole.

I plead guilty to both charges. I am both gullible and an asshole.

Re: "You are gullible assholes!!"

Tony is a nice man and seems genuinely concerned about the citizens of A-town. I feel bad that I went along with thinking he was a creep back then.

I think the anon meant we were gullible assholes for believing the rumors about Phillips?

Bernie, your forthrightness at being played is refreshing. In that we all exhibit tendencies toward gullibility and assholishness, I guess I'm a club member as well - or at least visit the club occasionally. I wish the same forthrightness could be found in the MSM. I guess living in the fourth estate means never having to say you're sorry. Or, at least, saying it quietly, several days hence, on page B-28.

He meant that I'm as gullible asshole, and that's either for sticking up for Tony now or for being part of the lynch mob in July.

So, although Tony did use poor judgment, I do think that I was gullible back in July and was pretty much an asshole for going along with the smear. He was obviously being set up and I did not see it. The papers were a little smarter than the rest of us, and held off.

"I think the anon meant we were gullible assholes for believing the rumors about Phillips?"

Oops. Now that I re-read it, you are probably right Dottie. Thanks. And sorry anon 9:39 if I jumed to an incorrect incorrectness about your comment, my apologies.

$73K is too much for an IT director of the 3rd largest city in PA.

Re: "He meant that I'm a gullible asshole"

I dunno Bern, it was plural, he said, "You are gullible assholes" ...

Re: "The papers were a little smarter than the rest of us, and held off."

Re: "I wonder ... could the Tony Phillips screwdrivers be the same folks who screwed Officer Michael Kenderski?"

In January 2007, several Allentown Police Officers, apparently highly offended by the "police brutality" Kenderski applied in arresting two individuals with mile-long criminal and incarceration records during two separate January '07 arrests, proactively leaped across the Thin Blue Line of Silence regarding police officers looking out for one another and squeeled on Kenderski to "management." If this doesn't strain believability enough, DA Jim Martin filed criminal charges against Kenderski in May '07 and by July '07 Kenderski had pled guilty to avoid prison and was off the force-- as if Allentown can afford to lose any police officers these days, not to mention one of its most decorated.

Of sideline interest: The Morning Call in its reporting never mentioned that both of Kenderski's arrestees were lifer (albeit young ones) criminals. The MC depicted the two as 4H Club-esque "teenagers."

Like Tony Phillips's experience with the APD and The Morning Call, there's something about the Michael Kenderski case that just doesn't ring right ...

Bill, Most folks probably don't know much about Kenderski. I'd like to talk to him.

Re: "Bill, Most folks probably don't know much about Kenderski. I'd like to talk to him."

I know (I was being facetious) and yeah, cool, it'd be great to hear Kenderski's side of "the story" like we heard Tony Phillips's side today. Really good reporting on Tony, Bernie, thank you for that ...

Bill, Actually, it was lousy reporting the first time.

True .. but it was redeemingly good today ..

Probably the reason he lost the race. Pawloski has a job for another 4 years.Let's see if he does a better job this time around.