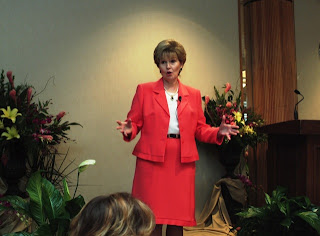 After yesterday's post about the demise of Pam Varkony's Perspectives blog, and the many comments that followed, Pam asked to share a few of her own thoughts.
Bernie, thank you for sharing your blog with me; I knew all those mean things I’ve heard about you couldn’t be true. You’re not a miserly old curmudgeon after all.

As a huge fan of the television series, "24" I’m especially enjoying reading all the conspiracy theory comments. If the writers' strike is still on when Kiefer Sutherland gets done serving time for his DUI, I’m sure he’d love to have you folks on the team.

Now that I’ve been suitably clever and irreverent, which is required when appearing in this hallowed space, I want to get serious just long enough to put to rest the notion that I am going to run for mayor of Allentown, or for any political office for that matter. I can’t imagine where anyone would get that idea; I am not involved in politics in any way and have not been for years. I was even a registered Independent for a time and came back to a party affiliation only because I was unhappy being outside the primary process.

Since leaving public life in 2001, I have been able to rebuild my career as a writer, speaker, and commentator, which has allowed me to follow my real passion…empowering other women. Most of you who read this blog probably know I have traveled twice to Afghanistan in the past 18 months. No one who is serious about running for office in Allentown, Pennsylvania spends that amount of time and money half a world away helping people who can’t vote for you.

So, as ego-boosting as it is to read all the speculation about how I’m a candidate for "something", I think it’s time we all move on and focus our attention on things that really matter, like fighting hunger, poverty, and violence.

And as for the fact that "Perspectives" is no longer on the Call’s website, it will suffice to say that in today’s litigious environment, the risk of allowing an independent contractor who is not covered by a company’s liability insurance, to have unfettered access to its public outlet, is simply becoming too great.

Finally, my column which appears every other Sunday on The Morning Call opinion pages will continue as it has for the past five years. I love writing it and I appreciate knowing there are people out there who read it. How do I know that? I know because of the comments that get posted on the Morning Call’s forum. Oh oh, I’ve mentioned the dreaded forum, or as blogmeister Bernie would call it, "the end of civilization as we know it". I hope he doesn’t delete me.
Damn, she writes well. I'll miss her blog, and hope to see it in independent form very soon.
Posted by Bernie O'Hare at 1/04/2008 12:01:00 AM

Her letter is proof that there are damn few virtuous women left in our community. Reminds me of a quote by Gerald Brenan - "Wisdom is keeping a sense of the fallibility of all our views and opinions."

She is Mother Theresa with Gucci shoes.

When are you going to start calling her derogatory names Bernie? You've done it to every other woman you have written about on your blog. Or, is she going to be the exception. Or, you haven't looked in her closets yet! I'll be waiting for your colorful slams against her.

Bernie won't slam Pam, she lent him a pair of Jimmy Choos for his inflatable girlfriend!

When are you going to start calling her derogatory names Bernie? You've done it to every other woman you have written about on your blog.

If you're going to make a charge like this, you should at least be truthful. This is completely and demonstrably false.

She is Mother Theresa with Gucci shoes.

You're not supposed to be blogging, remember??? You're on some super secret probation and taking classes so you don't lose your job. Now be a good boy.

Bernie, Kudos for bringing Pam on for a guest blog.

Pam, I followed you on TMC site, and we'll miss your blogging on there. I wish you the very best in the future, and be sure to let Bernie know when the revamped 'Perspectives' is up an running!