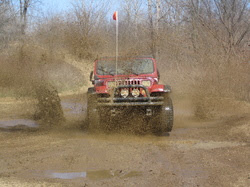 I sustained a severe athletic injury over the weekend. Watching a kids' basketball game in West End Allentown, I popped my lower back badly while bending over for a Gatorade bottle. To add to this indignity, some little brat pushed me over. When I complained, Allen High School officials blamed me for cracking their gym floor, but they're not getting a dime out of me.
"Are you OK?"

But it took me an hour to stand on MLK Day, so I decided to seek medical attention ftom my doctors in Bangor. I started out early enough, but it still took me another hour to get into my jeep. And have you ever tried driving stick shift with back spasms? No picnic. When I could do so safely, I blew off a few red lights, pissing off just about everyone in the slate belt, and they're all packin'.

When forced to stop, my jeep kept stalling as I'd try to put it back in gear. The last time, I was in the middle of a frickin' intersection, about a mile from the doctor's office. Not to worry. I have roadside insurance. But guess what? My damn insurance company was unable to find a tow truck. I dutifully called non emergency Bangor PD, explained the situation, and said I needed to get to the doctor. They told me not to worry my pretty little head. So I abandoned my trusty red jeep, and hobbled through 15 degree weather for the last mile, making it in about an hour.

After the usual three hour wait in the doctor's office, I was finally treated. Here's what I was told.

"You know why you pulled you back?"

"Because some little basard knocked me on my ass?"

"No! Because you're too damn fat!"

And so on. This Jenny Craig disciple let me have it because he's a stick. Fat or not, I could still knock him on his ass with just one good fart.

"You only come to see me when you have a problem."

Does he think I'm his boyfriend?

After getting lectured by a bunch of skinny people, the fat nurses came out and hooked up all these wires along my lower back and ass. Then they started electrocuting me. They twisted this goofy knob and then started asking questions.

Slight twist. "Do you feel that?"

Big twist of the knob. Smoke comes out my ass. How 'bout that?"

Geez, what is this, Guantanamo Bay? I'm pretty sure there was also an 80' antenna coming out of my ass. Throughout this therapy, I continued having back spasms. But the nurses were having a hoot! While jolts of electricity were shooting up my ass, with smoke everywhere, some police dispatcher called on my cell to tell me I was in big trouble for not having moved my jeep yet. All she could hear on the other end were shrieks of agony.

The torture mercifully over, some dude in a white labcoat gave me prescriptions for anti-inflammatories, Valium, Placebo, blood tests and yelled at me some more. I hobbled back to my jeep (another hour) and was soon joined by one of Bangor's finest. He looked like the Terminator with his shades and closely cropped hair. But he refused to put me out of my misery.

"If you guys shot a pit bull this summer, you could shoot me! I'm a lot nastier! I don't even have rabies shots."

"You're not getting off that easy, O'Hare. Why is smoke coming out of your ass?" I think he was tempted.

So I stood by my jeep (my back hurt too much to try and get in) and waited another hour for the tow truck to come. In the meantime, Arnold sat in his cruiser with all his lights whirling around. If any of you are interested, frostbite's nothing compared to electrodes in your ass. Only a few fingertips have fallen off as I type this little epistle.

Jeepless, I conned a friend to take me to the drugstore to get my much needed medicine. (Getting in her car was another exercise in masochism - back spasms and a sore ass). After an hour wait, I was called to the counter and told my insurance company had changed all my numbers around the first of the year again - how thoughtful of them! - so that my drugs would now cost me $34,678.92. Fortunately, my health insurance company faxed the right numbers right away. Another hour. The new bill? $34,677.92.

Well, I just popped a few of those pills. Worth every penny! My back still hurts like hell, but now at least I don't give a shit. By Wednesday or Thursday, I'll be back with more about our homeless, those wacky kids in Easton, and my secret crush on Bossman Long.

Bernie you know a good osteopath too...I'm sure it would have been less stressful.

Bernie, I guess those people were wrong when they said that you were tougher than a $2 steak !!!

Julian, Good as he is, I could never go to a doctor who knows me.

Geez, what an ordeal! I am so sorry to hear about this. I hope you can bounce back soon. I would bake you some desserts, but in your case that won't help!

Dottie, No worries. Only the good die young.

Would you like some happy pills? I got them at the Fleck pharmacy!

I have some. These are even legal.

I had a similar problem two weeks ago with back spasms, but I can't afford to see a doctor... plus I don't need lecturing on my weight. I already know I'm fat!

I've been taking rapid-release extra strength tylenol every time it starts acting up. But since I returned to the gym, the spasms (and other pains) have decreased. I think my back was just over-stressed from all the lifting at work over the holidays.

I think I've pulled my back out falling off my chair laughing; now I have a headache from feeling guilty for laughing. Since I had to switch to an HMO this year and will only be reimbursed for a life threatening injury, would you be willing to share a few of your pills with a fellow blogger?

Do take good care of yourself. Cyberspace wouldn't be the same without you. And Bernie, the next time you get injured in the West End of Allentown, call for backup...I'll be right there.

West End is a tough place for me to go down. But low back pain is one of those things that actually gets worse the next day. So I was able to fight my way out of there. I even got into a fake fistfight with some cute little eight year old until he threatened to cap me.

And Pam, I'll save a few of those Valiums. I was going to slip them in a Casey cocktail, but I'll hold off.

Bernie,
Very funny post, sorry about your misfortune. My husband and I both had back troubles this past two years, mine very much like yours.
Beer works best, and it's natural!
Seriously, my husband was on every legal pain pill available, they were costly, weird side effects and didn't help much, I was having organ issues from the pain pills.
So we have gone homeopathic, if it's not natural we don't touch it.
We are both doing much better.
Good luck.

Out of curiousity (and not to be rude), what makes a pill not-natural?

if'n it has sparkly stuff in it, i'll bet

no wonder there were sirens going off left & right- it sounded like the bronx- not bangor!

a.j.
Sorry not to be specific. Some pills are natural, meaning they only contain organic matter that blends with the natural make up of the body. Some pills, such as most prescription pain killers, are loaded with chemicals that do not always blend well with our insides. Sometimes they do more harm than good,especially in the long term, which I'm sure everyone on this post understands.