Norco Council's $650k Renovations Benefit Them, But Not the Public 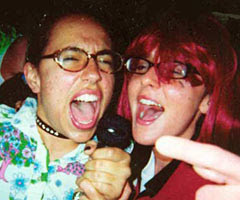 During Northampton County Council's reorganization earlier this month, he blew a gasket over the amount of money spent on renovations to their chambers and meeting room. Instead of the $482 thousand budgeted, council spent at least fifty per cent more, at least $650 thousand.

Hey, it's only money.

When he learned how much had actually been spent on a project he had opposed, Angle stormed off the dais and squeezed into the press box between Express Times reporter Sarah Cassi and Morning Call news maven Joe Nixon - a thorn between two roses. A bit theatrical? Yes. But The Express Times agrees with Ron's point. It has slammed council for extravagances like a new dais and a goofy, etched glass, county seal behind Prez Ann McHale.

"At least with the new public address system, we'll be able to hear McHale and Co. try to explain why it's unfair to hold them to a lean remodeling budget at a time when many people's homeownership dreams are headed for sheriff's sales."

I slipped into yesterday's combined personnel/finance committee meeting and found a seat in the back, where I belong. This time, the fourth estate pulled out crucifixes when Angle tried to sit with them. He shrunk away, and eventually found a spot on the other side of the room, plopping down right next to Fiscal Affairs Director Vic Mazziotti. Vic looked like he wanted to jump out a window, but there are none. Just padded walls. Must be the Patriot Act or something.

Even in the back of the room, I could hear Angle just fine. In fact, people could hear Angle in Lehigh County, and he wasn't even using the PA system. But when McHale opened her mouth, I thought I was watching a foreign movie. Her lips would move, but the sounds would cut off. Neiper and Cusick came through loud and clear, but I also was unable to make out most of what Council Clerk Frank Flisser had to say.

People who addressed council had to hold a mike in one hand as they spoke, kinda' like karaoke. Let's face it. It's only a matter of time before Wayne Grube starts singing show tunes.

A gazillion dollars or not, that PA system needs some tweaking. Council also replaced theatre-style seats for the public with cheap plastic chairs.

It appears that council members thought a great deal about themselves with these renovations, but very little about the public they supposedly serve.
Posted by Bernie O'Hare at 1/17/2008 12:00:00 AM

Angle is a mad man but I agree with him on this one. Council should be ashamed of themselves on this one. Especially the unchecked overrun. Their oversight is not very reassuring. It makes one wonder what else is slipping by them.
But what the hell its only taxpayer money. I don't remember any past councils pushing for these extravagent issues, new digs and big raises.
When did Council vote for this Trump Plaza renovation?

Council should rent it out on weekends for karaoke.

Gotta say that I'm going with R-Dawg on this one. He is exactly right. Who in the world were the architects? They must be from Lehigh or Bucks County. No respect for tax dollars.

Hopefully they will wise up in the future.

Wait a second, is Butz from Northampton County.....UMMM NO. Bernie....Do we have a pattern?

And stop wasting our money! Make sure the architect and contractor don't charge us a fee on top of all of those change orders!

OK. Even us lowly taxpayers know that when we do renovations in our humble abodes, we add an additional 5 to 10% more to the budget for unforseen circumstances. That is normal. Even in industry, they know this.

But the imperious AM and friends pushed this to nearly 35% (I did the math, Bernie). Never mind - "When did Council vote for this Trump Plaza renovation" - that's Monday quarterbacking. There was several Council meetings where the public could input on the budget. And some did.

But never was there open meetings on the change orders to 35%! What the hell! The whole council was shaking their collective snobby heads when the courthouse renovations went over to 5% (reasonable or not when talking millions is debatable), but when the finger is pointing the other way? Give me a break. 35%?! Too bad the elections are over, I may have rethought my vote.

Signed - I've been robbed and left wearing a barrel

But the imperious AM and friends pushed this to nearly 35% (I did the math, Bernie).

More of the same from the NC politburo.

While they are notoriously ambivalent regarding fiscal responsibility, you complainers just need to be quiet and get a little re-education on the intricacies of the one-party process.

Ron Angle should be sent to a gulag. After all, Wayne Grube said the new chambers were "nice".

I want to be a contractor doing work at Wayne's house. I want to see how many sheckles I can relieve him of under the standard of "nice". I wonder if he's as recklessly irresponsible with his own money as he is with mine?

Maybe we can vote them out?