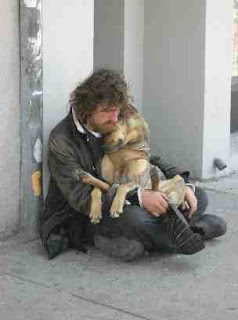 Last week, I posted some interesting statistics about Northampton County's homeless. Eight percent of our population are living in poverty. But this problem exists everywhere. At LVPoliblog, for example, Addicted posted a series of sensitive interviews with Allentown's homeless. As our economy continues to tank, it is only logical to conclude that the ranks of the homeless will swell.

I was only able to post this data because of research kindly provided by Lori G. Sywensky, Norco's Community Development Grants Administrator. Lori is one of many people in government who really do care. She's just one of many names you'll rarely see in the paper. We see the embezzlers or folks who abuse their credit cards. But there are many more Loris. If you attended last Thursday's meeting of Northampton County Council, you'd see the appreciation its members expressed to her for her efforts with the homeless.
In last week's post, I noted in a comment that Northampton County Council had unanimously adopted a resolution seeking $233 thousand from the state for emergency shelters. "It will get it, too. The amount of money has gone up every year since I've been following it."

Although the amount being requested has increased, the actual money received is another story. As Lori explains it, "Last year, we applied for $175,560 on behalf of five area shelters. The state's DCED thought we would receive around $180,000, but due to drastic cuts in McKinney-Vento Act funding, the state only awarded us $61,988 for use in two of the shelters. PA DCED told us in November that they received a slight in increase in Emergency Shelter Grant funds this year, so we're hopeful we can get money for some more of our projects this year." For the first time in four years, Congress has increased funding for homeless children by $2 million.

Here's the rest of the homeless research provided by Lori.

Income as a Factor

• About 25% of the adults staying in shelter in the LV last year were employed, an increase of almost 4% from the previous year. Thirty percent (30%) of adults in family shelters were working, with an even larger number (48%) of heads-of-household actively seeking employment.

Disability as a Factor

* Monthly Supplemental Security Income (SSI) payments for an individual are $603 in Northampton County. If SSI represents an individual's sole source of income, $181 in monthly rent is affordable. Fair Market Rent for a one-bedroom is $668.

* Over 25% of the people staying in one of the LV's shelters identified themselves as having physical or functional disabilities, with 15% of them receiving SSI or SSD.

Race/Ethnicity as a Factor

• County residents who are African American and Latino/Hispanic continue to be disproportionately effected by homelessness. However, the numbers vary greatly when comparing families and individuals who stayed in shelters.

At minimum, homeless souls should be granted privileges at EASD's proposed $11M pool.

Bernie, great picture it really puts a personal touch on the issue of the homeless. "Nice Job"

Your support for Charlie Dent; however, confuse the hell out of me!

Your support for Charlie Dent; however, confuse the hell out of me!

But my focus here is factual details concerning our local homeless. And for everyone of us who is actually homeless, many more are on the edge.

Charlie would prefer that the needy be aborted before becoming our burden. It's a root cause approach.

Dude, If you want to slam Dent for an anti-union vote or his stance on some environmental issues, be my guest. But when you make a ststement like that, you only make yourself look petty, especially since Dent happens to be a member of the Congress who voted to spend an extra $2 MM for the homeless shelters this year. Perhaps it should have been more, but your remark is unjustified. You're trying to portray Dent as a monster. He may be right of center, but is a decent man.

Thanks, Bernie, for posting this important info. (and thanks to Ms. Sywensky for compiling it).

Your post notes that Congress has increased federal funding for homeless children this year by $ 2 million. Reuters news just noted that Pres. Bush has requested $ 193 BILLION to fund the war in Iraq this year.

Tells you all you need to know about the priorities in America right now, doesn't it ?

Don, Very well said! The amount of money we have spent in iraq is just obscene and well beyond what even opponents of our involvement initially predicted. In addition to taking care of the homeless, we could provide health care or pay down the deficit. The invasion was certainly a mistake.

War is obscene and every war this country has been in has had an obscene cost. But also obscene is complaining about a country that spends less than 4% of GDP to defend our right to complain.

In 2006, US defense expenditures amounted to 4.1% of the GDP. But it's also true that US military spending is 48% of the world total.

Moreover, I think that's a fellacious argument. Defense analyst Chris Hellman, who works with the Center for Arms Control and Non-Proliferation, has stated, The GDP argument is the last refuge of scoundrels."

"Tying our level of spending to defense to the number of cheeseburgers consumed by Americans is not a good way to measure our strategic requirement."

I don't think there's anything obscene in complaining about the cost of this war. Much of the money has been flushed down the toilet, awarded in no bid contracts. Other money has been squandered and misappropriated by Iraqis themselves.

Don't get me wrong. I don't advocate a precipitous withdrawal. I do advocate supplying our troops with the best equipment available. I'd never condone the wholesale genocide of innocent Iraqi children, which will surely happen if we just pull out.

But the decision to invade and the first few years of that war were a total disaster from just about every perspective. The money angle is no exception. It is criminal to have sent troops into battle without proper equipmnet while throwing money at no bid copntractors. It was oscene and remains so.

There will be almost 1.5 million homeless children in America this year and the federal government has allocated just $64 million to help them: that's less than $43 a child.

There are aprox. 1.5 million homeless in Iraq today, of which about a third are children. We will spend $193 BILLION in Iraq this year, or about $ 39,000 per homeless Iraqi child (assuming what we are doing there actually is of some help to those children).

That's almost a THOUSAND times what we will spend on each homeless child in the U.S.

And so is the war.

<<< as we can tell about people's values from the space between what they tell others to put up with and what they get for themselves.>>>NYT

I came across this quote recently in a piece in the NYT's concerning HealthCare and it sang to me in how people frame their opinions on the haves and the have-nots and those spaces in between.Many people are a Heart Beat from being homeless, especially in these times when more people are making choices between paying for medicine and paying for shelter. It is a reality that people are sicker when they seek healthcare, priorities are painfully adjusted. Human dignity and self dignity are priceless values which seem to be whittled away in a Culture where Status and the desire for it have replaced real concept of Values.

PS. I don't understand the demonizing of Charlie Dent. He is a Politician. I saw him take a risk 10 or so years ago when he showed up at the Lehigh County Government Center for a Vigil against Hate after the Murder of Matthew Shepard. That takes Balls for an elected official in this region to be so Public in Showing his Humanity.

Liberals love having a military to clean up disasters, but never want to acknowledge the ugly reasons a military is necessary in the first place. Want to drive an honest liberal crazy? Ask him or her what's worth deploying the military for. Most can't get past the humanitarian stuff. Freedom isn't free - not even for poor, free people.

I'm a liberal. I think we need a military. I think most liberals, including me, agree our decision to invade Afghanistan was necessary.

So stop with the goofy slogans from the "300." I already saw that movie, and this isn't Sparta.

Why was attacking Afghanistan necessary? I thought Bush and Cheney arranged the 9/11 attacks to expand Halliburton's global hegemony?

Dude, Why are you trying to change the focus from the homeless to unnecessary and untrue slams against liberals? Feeling guilty?

My comment was admittedly snarky. I'm thrown when a modern liberal defends any military engagement. Although I'm aware of your consistency on Afghanistan and appreciated the post on Dent's visit.

The debate touched on the comparison of war spending to homeless spending. I believe we can defend ourselves and feed needy souls.

I think sniping about one of the wars that both parties' likely '08 standard bearers authorized and continue to fund, as a tactic to complain about inadequate social spending, is either naive or disingenuous.

From our founding, we've always engaged in controversial foreign entanglements and we've always had poor among us.

FDR brutally prosecuted a war against Germany (he had captured Nazis tried and executed following secret tribunals), a country that did not attack us, while launching a wide array of social programs designed to help the needy.

Our country has a history of being able to do both. I've not seen 300, but it's in my Netflix queue.

Our country has a history of being able to do both. I've not seen 300, but it's in my Netflix queue.

Your points are well made. Dude, you've got to see the 300. That movie was made for conservatives. The naysayers in Sparta, you could picture them as Pelosi. I liked the movie myself. But I'm more the Athenian navy type.

This is just not right!