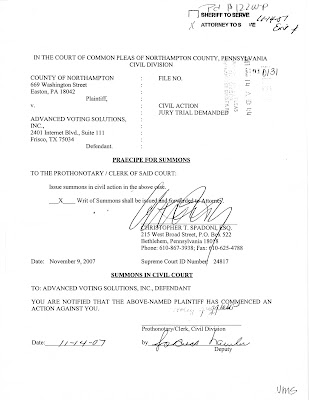 On New Year's Eve, I told you Pennsylvania's Department of State has decertified the Advanced Voting Solutions (AVS) machines being used in Northampton, Lackawanna and Wayne Counties.
That's $2.1 million down the hopper.

In a front page story, the Express Times tells us the state will reimburse us for the $2 million that brand new machines are expected to cost. "That was a nice Christmas present," says county exec Stoffa.

But what about the money we already spent for now defunct machines? According to county Director of Administration John Conklin, the county filed a suit against AVS this week. Actually, it was filed November 14, over a month before the state decertification.
Posted by Bernie O'Hare at 1/04/2008 12:00:00 AM

Garvin was chair of the election commission. I'm sure it was his wisdom that prompted the law suit as King Stoffa was still working on filling his Cabinet and to busy attacking DePaul because she was doing her job.

Yep, I'm sure Walt Garvin was behind this. Osmosis. He probably even drafted the complaint and plows the snow.

WOW, hopefully we get the money back he lost.