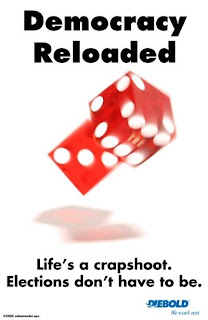 "Memo to County leadership: Don't screw it up this time!"

That's one anonymous comment to yesterday's post about five different voting systems being considered by Northampton County. You'll notice no vendor is recommended. This person just wants someone to blame if things go wrong.

"I'm not selecting the voting machine."

That's how one Northampton County Council member responded when I mentioned different voting machine possibilities yesterday. Like that anonymous commenter, this council member is more interested in ducking responsibility. "The elections commission will decide."

Council members view the elections commission as a convenient escape hatch. If the system chosen is a disaster, they can point their fingers. But under our home rule charter, that appointed body exists to "administer the system of elections and the registration of voters under applicable law." According to the courts, its function is purely ministerial. It sets no policy. That's council's job. Council exercises the county's residual powers.

What could be more appropriate than that?

But let's get something straight. The decision will be made tonight. An unelected elections commission, which is meeting as I write this blog, will merely be making a recommendation. Tonight, when county council makes a decision, it will be our decision. And we all have the right to address them with our own opinions and concerns. Some like the Sequoia selection because it is difficult to hack, can be retrofitted for a paper trail, and looks amazingly like our lever machines. I've opted for the sole optical scanner under consideration, which will give us a paper trail and a check on the count displayed by the scanner.

Doesn't matter; voters won't get what they need!

The only comment I deleted was a "fuck you" from some nitwit. If that was you, then I'm not surprised. Now, instead of telling us that voters aren't getting what they need, try telling us what systemn we should be using. Let's assume you're on council, and you have to choose a DOS-certified system. What's it going to be, bippy? Just as a council member tries to duck responsibility, so do you.

As any bureaucrat worth his salt knows, the sole reason for committees, commissions, and experts is so you can blame them if something goes wrong. On the other hand, you claim all the credit if things work out.

Bernie, just FYI: I understand that Lancaster County had some real difficulties with the Hart system. I believe some of that was based on poor tech support with breakdowns on Election Day. That's what makes me unsure about the ONLY optical scan choice we have.

LadyRep, I did not like the Hart system, to be honest. The only thing I liked about it is that it is an optical scanner. Thanks for telling us about Lancaster. If Hart is out, then I'd go w/ the Sequoia bc it is firmware and presents the entire ballot to the voter like the lever machine.

Lancaster had trouble with Hart
Premier (Diebolt) has been faulty in the past. They supplied the decertified ones we are getting rid of didn't they?


Sequoia seems to have all the parameters:
Ease of use
back up paper roll
farm ware rather soft ware
I reiterate

With the Stoffa Admin. to protect all of a sudden this is a Greek Democracy. I continue to maintain we have a representative form of Governemnt and invest in these elected officials the trust to make wise judgements. You have the time to be at every meeting and research every issue good for you. Not everyone does or should. If thats the case lets dump the elected Executive and County Council. Go to three low paid commissioners and let the full-time bureaucrats run things. They mainly do anyway. Or if possible pettion the state to be a New England type Govt. where whoever shows up and votes thats what happens.
Why elect any of these people? what purpose do they serve?
So if things go great YEA! Administration, if things go bad, boo everyone who doesn't come to a meeting we elect people to represent us at.

With the Stoffa Admin. to protect all of a sudden this is a Greek Democracy. ... So if things go great YEA! Administration, if things go bad, boo everyone who doesn't come to a meeting we elect people to represent us at.

Northampton County, like most of the country, is a republican democracy. We elect the people who make the desisions, true, but we also have the right to be involved in advising the people who ultimately cast those votes. And in a home rule government dsesigned to bring the government closer to the people, we may even have a duty. Democracy is not a spectator sport.

I have no problem with criticizing what NC council or the administration does or fails to do. I do it myself tather frequently. But I hate it whjen someone says none of the options are good without bothering to come up with a solution. When you do that, you're just being destructive.

County council had a very difficult decision, and not a lot of time to make it. I was really impressed at the number of people who did come and offer their opinions after educating themselves. I am not impressed at all by a person who offers no suggestions and just waits for something to go wrong so you can slam whoever it's in your interest to slam.