Congressional Candidate Bill Hall is Having a Press Conference Today 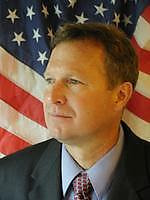 Right now, I believe, that the people who run local politics, or federal politics, they don't really represent the people. They go ahead and they pick the candidates they want and they take those candidates and they promote them. They funnel money to them. They get them publicity. And then they endorse them. And I don't think that's right. I think it should be up to the people.

Bill's running for the Lehigh Valley's Democratic nomination to Congress. He's an alternative to Sam Bennett, who is being shoved down our throats by the likes of Bossman Long.

While she's prancing here and there with metal detectors, looking for dimes and nickels, Hall is having his second press conference today. Today, at noon, at Bethlehem's Public Library, Bill will discuss some legislation he would sponsor.

He would support a new immigration law that provides a path to citizenship. He'll attempt to reduce tax breaks for Big Oil and major corporations. He wants to close loopholes in the Medicaire Advantage plan. He believes we need to repair our decaying infrastructure.

Bernie, is this the same nutcase that ran for President in 2004, then ran for Lt. Governor in 2006 and the press from the area ever heard of before. Sounds like we have a real winner here!!!

I've spoken to Bill a few times. He's no nutcase, although he did run for prez to make a point a few years ago. In his race for Lt. Gov., he actually did quite well. I believe he won LC. Not bad for a nutcase, eh?

He's a sincere guy who wants to improve government. We could use a few more nutcases like him.


Bernie, is this the same nutcase that ran for President in 2004, then ran for Lt. Governor in 2006 and the press from the area ever heard of before. Sounds like we have a real winner here!!!

He won Northampton county in 2006

You will all be surprise by
Bill; when it's all over.

You can quote me on that!

Thats nice but who the hell are we quoting?

Now this is a man I can support!