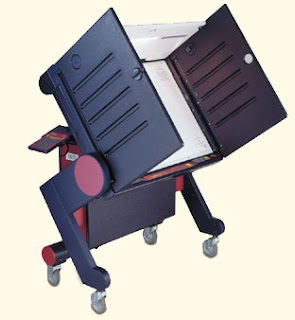 Ron Angle finally ended his boycott of the Northampton County Council dais last night, ascending into the stratosphere with seven other council members. But he was still the sole vote against a lever look-a-like endorsed by seven council members.

Sequoia Voting Systems, in the elections business for over 100 years, won over the elections commission, council and even me. Its product, technically called the Advantage D-10, already serves most of New Jersey, Louisiana and Montgomery County. A disabled elections commission member reports it is extremely user friendly, with buttons located within easy reach. The system does mimic the lever machine, presenting a full face ballot to the voter. Each machine is independently operated and is run on firmware.

Dr. Alan Brau, a leading voting rights activist, conceded that the Advantage has many "good points" and is a "strong system from a hardware standpoint." But he stressed there is no way you can really be sure your vote counts, and suggested that we run one election with paper ballots until we have time to pursue other options. Instead of giving a nonlocal vendor millions, he argued it made for sense to hire people locally to count the votes, and argued other jurisdictions have done so very quickly. He claimed we could conduct an election for $100 to $200 thousand, and our biggest expense would be the purchase of an automark for visually disabled voters.

Sequoia was asked to respond to Dr. Brau, and started by acknowledging that it actually sells the products used for elections with paper ballots. But its project manager, who started out as a county clerk in Montgomery County, said it would be "close to catastrophic for the voters in your county to use paper ballots." He noted most paper ballots break up the party and that questions of "voter intent" will invariably arise, just like they do with punch cards.

Councilman Charles Dertinger, himself a former elections commissioner, noted that Pennsylvania, with its many jurisdictions, would always have a much larger ballot than commonly found elsewhere. Because of this, he thought it would be impossible to get results using paper ballots until well into the next day. He noted that the county already has to "scour" the area for elections workers, and would have a very hard time finding the additional staff needed to count the votes. Finally, he noted that voters are already comfortable with full face ballots that appear on what he calls "the big green machine." Voters will be reassured by a lever look-a-like whose only major difference is that it is electronic.

Although I was leaning towards optical scanning or paper ballots, Dertinger made too compelling a case for Advantage D-10, which can easily be retrofitted to add a paper ballot backup if the state decides to impose that requirement. He very nearly persuaded Angle, too, but Angle was unable to support a system that has no paper trail. As he pointed out last night, his main problem is with the state, for not insisting on it.

The county will load up with 300 of these babies, which weigh 225 lb. per machine. Price? $1.8 million, but the state will reimburse us.

Angle and Dertinger, usually at each other's throats, were unusually cordial to each other last night, and reportedly left the courthouse together, holding hands.

Update: The Morning Calls' Joe Nixon has a detailed account, including a video demonstration, located here. Sarah Cassi's equally detailed report, published in The Express Times, is located here. Wayne Grube absence is noted in both stories, and I hope the lousy weather had more to do with that than his health.
Posted by Bernie O'Hare at 1/18/2008 12:00:00 AM

And where is the state getting the money to reimburse us? From us?

Bernie, I believe that this is the best decision given the ridiculously short time in which the decision had to be made. I can't believe that an amount of money like that couldn't warrant a more respectful review period, even with the deadlines we were facing. It's the best of a bad situation on a number of levels. I wish us well.

I have to admit, it was Dertinger's finest hour. And, this County Council's also for bravado of selecting with it's back to the wall. Ron Angle balked for a poor reason, in my opinion. Too easy and convenient to blame the feds or state for inaction on election reform. You can't wait for an open date hoping the feds and state to act. That's like an osterich putting it's head in the sand, hoping the danger to go away.

I'd agree Dertinger was at his finest last night. He really did do his homework on this issue. I was also quite impressed by Norco elections chair Ken Kraft, but it was actually Dertinger who swayed me. I never expected that to happen.

There is a paper roll in the back of the machine that is easily read and compared to the digital counter.
It is easily retrofitted with the
voter verifiable secured cut and drop paperoll as well , should the state mandate it.

But then neither Dertinger or Angle attended the demonstration so they never really handled any of the machines.

THe only thing missing from the demos was a price tag on any of them. Anyone care to fill us in on that?

Great decision for Northampton County Council! I can admit that one time that I voted and the touch screens were used... I was confused and I'm 24... I wonder how the older citizens felt... this decision really benefits the more loy-key races (like to my mom Meg Holland) since someone might skip over it completely with the touch screen and submit their vote after the main races. It's definitely a good idea to have all the races on one screen just like the lever machines.

1) The machine was, in fact, demonstated last night at counil chambers, and with the paper roll.

2) At least four members of county council attended the public or private demonstration of the different systems - Dowd, Ferraro, Neiper & Dertinger. I don't know whether they physically handled the machines.

Typical blather from DottieN that Dertinger wasn't at the demonstration. Were you wearing your blinders? Dertinger was in full view of everybody but her, and Angle was in the hallway also and I'll bet they massaged the machines. She's as wacky as Joan Rosenthal the Republican representative on the elections commission.

I still believe Stoffa should have 'cleaned house' including Rosenthal. I can only believe she stayed due to some Repub' campaign promises he had to keep.

1) DottieN's "typical blather" included support for the voting system that Dertinger himself endorsed. As I indicated earlier and in my post, Dertinger obviously did his homework before Thursday night. I don't think you help things when your refer to her comments as blather or call her or Rosenthal "wacky." You just diminish yourself.

2. I'll agree that Rosenthal should not have been reappointed to the elections commission, and that's only because some Dems had concerns about her ability to be fair. I also don't understand why she called Lilly Gioia (sp?)'s remarks about different vendors as "inappropriate." She was there to get as much information as she could get, and I think Lilly had something positive to offer. But you do Stoffa a disservice if you baselessly claim that he made some sort of deal with county Rs. He doesn't play that game. And as long as he is county exec, you won't see that. I realize this is difficult for you, but it's time you realize that the "let's make a deal" days are over, at least for now.

This is one situation in which Rs and Dems actually came together. Dotty N and Bossman Long were saying the same things about Sequoia. Do you have to play politics even when both parties are largely in agreement about something?

It would be interesting to see what the other two counties decide and why, just as a matter of curiosity. I don't know when that is anticipated. Any word on that, Bernie?