Who Let the Dogs Out? The NFL 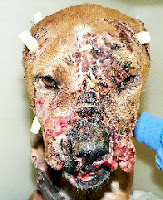 My brother persuaded me last night to blow off a county council meeting and go with him to watch the Reading Phillies lose a close one to the Harrisburg Senators. We took my grandson and one of his friends, and they had a blast. Kids always love it there. If you get there early enough, your kids might get a chance to speak to some of the players, who go out of their way to be nice.

But our most glorified athletes are professional football players. Based on a recent New York Times story, I have to wonder whether we're fawning over monsters with a disturbing affinity for transforming man's best friend in their own image. Here's an excerpt.
¶A miniature horse was mauled to death in September by an escaped pit bull and mastiff owned by linebacker Joey Porter, who was on the Steelers at the time.

¶A cache of firearms was discovered at the suburban Chicago home of Bears defensive tackle Tank Johnson by the authorities in December after neighbors complained about three pit bulls he kept caged.

¶A drug raid on a house owned by Falcons quarterback Michael Vick uncovered more than 50 pit bulls on the property as well as evidence of dog fighting that included bloody carpets, pry bars to open canine jaws, a rape stand to force mating, and treadmills designed for dogs.
Update: Washington running back Clinton Portis, asked about Michael Vick, says this: "It's his dogs. If that's what he wants to do, do it." In late May, he argues dogfighting is not that serious a crime. Now he's apologizing, sort of. He claims he's really a light-hearted and funny guy, a sensitive man. "At that time I had no idea the love people have for animals."
Posted by Bernie O'Hare at 6/08/2007 12:15:00 AM

good lord. Wasn't expecting that picture this morning! But startling is necessary when talking about this stuff.

Oh, looks like you missed a good council meeting. One of the union contracts was approved.

That pic is the aftermath of one of those dog fights we read about. I realize it's an unpleasant sight.

Tom, Agreed this has becaome a street phenom, part of the gang culture. But it got its start in the rural south. Marine Corps mascot? A pit bull named John Wayne, who probably has seen more combat than his namesake.

i think the NFL has it's share of shitbags-just like all other societal groups. the issue is how will the legue deal with the Vicks and and Porters of their world.

The point made by the NYT articles is that this is not some isolated incident, but an NFL problem.

The hell with the league. The question, in my mind, is how do we deal with these scumbags. And I say we boycott them until they clean uop their act. I have no intention of watching these monsters run around a football field. It's obscene. I don't care if an athlete has a substance abuse problem or likes to whoop it up after a good play. We're all human. But this disregard for animal life is appalling. If we tolerate this, our culture deteriorates, at least in my view. I will not listen to a single NFL game this year. That's my response.

As a middle aged woman, I have to wonder about the men who need to resort to this type of behavior to prove that they're "Men". Abuse of an animal,woman, or child, in no way makes you manly. It actually makes you pathetic. These people are beyond sick and society needs to send a message that this behavior will not be tolerated.
With so much testosterone, maybe they should pick up a gun and join some real men in our military.

I posted about how angry I am at Baseball, because they will suspend a player for hitting a batter with a pitch, but do nothing if he hits his wife with a fist. I wouldn't buy my kids a jersey of any player who publicly displays such bad conduct. I love sports, but I'm not all that knowledgeable about the players, but my teenage son is. He was the one who told me about the "pac-man" and "his behaviour. I think the NFL Commissioner (Goodall?) is doing the right thing in suspending the bad actors, and from I have read this morning, Michael Vick could be in big trouble. I hope he does get suspended, and these overprivileged illiterate millionaires get a wake up call.
If that is how they treat a dog, how can you expect them to respect another person, especially a woman?

i think we should take all the NFL players (and all the other public figures) who do horrible things to animals and put them in a large, closed arena. then, take all the vicious animals that they have created and release them. see how the animal abusers like a taste of their own medicine.

oh...then we should estimate how much money that they have made off these dogs fights, add in pain and suffering for the animals, fine them for our amount, and give the money to the S.P.C.A's and local animal shelters.

You were critical of my showing of the saddam video on my once proud blog.

That pic was rather over the top. (And more graphic than the Stallone flop by the same title).

Is it just me or that dope from the Redskins who defended Vick and bragged he could bring you to a dog fight in anytown in the south even worst.

I mean he plays for Joe "Jesus Christ is in everything I do, including why none of my NASCAR teams have booze sponsers" Gibbs.

Seems his football playes must have missed all those alleged lessons on Jesus he gives a s a coach.

I mean would Jesus be down with Animal Cruelty????

Also Reading is awsome. Your best bet is buy tickets early in the season for the Blue Reserved. Its a whole whopping nine bucks a seat and worst seats are row two feild level!

And how about them big Phillies sweeping the NY MUTTS?

Vivisectors have been doing this to dogs for 200 years and not just in the U.S.

And they get paid good money to do it.