Should a Newspaper Reveal Race of At-Large Rape Suspect? 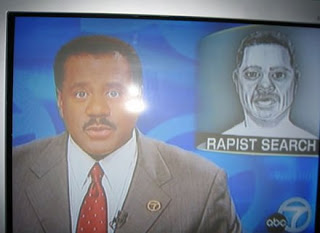 In Bill White's words, "It’s not the newspaper’s job to protect you from the truth." Sounds pretty lofty, eh? But many newspapers, including The Morning Call, do it all the time. They shy away from racial identifiers, even when a criminal suspect is at large and the rest of the description is detailed enough to make a suspect's race meaningful.

I sympathize with the editorial concern over "the mangled language of race." The concern about stereotyping is justified, and racial identifiers have traditionally been used to establish white superiority. But it's very relevant when police are actively searching for someone and plenty of other physical characteristics are known.

The Morning Call is the only local media that refused to use any racial identifiers at all last November, when police were actively seeking a person who assaulted a bus driver. The Express Times included a more detailed description, and WFMZ actually played a video.

Now, alone again, The Morning Call refuses to reveal the skin tone of an alleged rapist who last weekend disguised himself as a cop. Plenty of other physical characteristics are known so there's no danger of racial stereotyping. And police are still looking for this guy, too.

Of course they should 'reveal' the race of the suspect. It should be treated the same as any other physical trait.

Of course they should give his race! How incompetent is the news getting? Do you think it would be considered racism if they say he is white? I don't think so. Do you think it is discriminating to give phyisical characteristics if he is short, heavy, bald, wears thick glasses, smells foul, has very hairy arms, and a tatoo of Lucifer on his butt? Maybe the news media should just say he is a male (or female) and let it at that. We are becoming a nation of "wussies" just to avoid the truth that might insult someone even if it might save someone else. GET OVER IT!

he is short, heavy, bald, wears thick glasses, smells foul, has very hairy arms, and a tatoo of Lucifer on his butt?

Hey, I've only shown a special few that tatoo.

As a world renowned broadcaster I always report the physical appearance (i.e. nappy headed, scary looking...), never the race; what, are you all bigots?!

...but when someone is poor or disadvantaged in any way, we get lots of pictures and an ample description from dullards like Wolf "so poor, so black" Blitzer.

brian is blaming our local problems on Wolf Blitzer.

Look up what 'like' means, go to m-w.com and look at the fourth definition.

"Billy is acting like a monkey; therefore monkeys are to blame for Billy's problems." That is an example of the logic you are using.

That sketch of the suspect resembles the newscaster.