Let the Kids Play Ball, Even if it's With Metal Bats 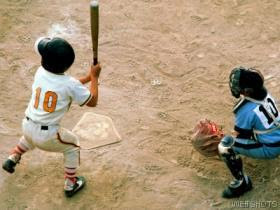 Two or three nights every week, I help a bunch of young kids in east Allentown learn how to play baseball. Some are very well coordinated for their age, but none has an attention span longer than two seconds. That's why baseball can be dangerous for young kids, regardless whether wood or aluminum bats are used. After two seconds, most of them are looking at their mom or have their heads down. Infielders kick dirt or go into some trance. Outfielders pull grass and count clouds. One of them actually took a nap. Invariably, the kid paying least attention gets nailed. When I was a kid, it happened to me regularly. I eventually played the "left out" position.
A lot of people are convinced baseball would be much safer if only we returned to wood. New York City and North Dakota have banned metal bats in high school baseball. In Pennsylvania, state rep Mike Carroll actually wants $25 fines imposed on kids who use aluminum in an organized game. He has no statistical evidence that heavy wooden bats are safer, but wants them banned anyway. "My personal experience drives me farther than any other study."

A lot of the coaches and parents I talk to agree with him. They shake their heads sadly, convinced wooden bats are safer. Guess what? Any one of them could insist their child use a wooden bat. They're legal. But every kid who steps to the plate is swinging aluminum. I'll tell you why. They're easier to swing, and that makes it easier to hit a ball. They know.

PERCEPTION: Aluminum bats are more dangerous than wood bats. The National Consumer Product Safety Commission studied this issue and concluded in 2002 that there is no evidence to suggest that aluminum bats pose any greater risk than wood bats. Multiple amateur baseball governing bodies, including the NCAA, National High School Federation, Little League International, PONY, et al, all track safety statistics and have concluded that aluminum bats do not pose a safety risk.

PERCEPTION: Balls come off aluminum bats faster than wood. Since 2003, all bats are required to meet the “Bat Exit Speed Ratio” (BESR) performance limitation, which ensures that aluminum bats do not hit the ball any harder than the best wood bats.

PERCEPTION: The Brown University study proves that aluminum bats hit the ball harder than wood bats. This study is irrelevant by today’s standards. All of the bats used in the Brown study would not be allowed to be used today, because they do not meet the BESR standard.

PERCEPTION: The use of aluminum bats places children at an unacceptable risk of injury. A study from the National Center for Catastrophic Sports Injury Research shows that there have been only 15 catastrophic batted ball injuries to pitchers out of more than 9,500,000 high school and college participants since 1982.

Let's be honest. Those of us who prefer the "crack" of the bat are really just nostalgic, like Express Times editor Joe Owens. He must miss the old days near Philly, when we was swinging the bat himself. I miss them, too.

Don't worry, Joe. Kids with aluminum bats still love baseball as much as us old farts. They still puzzle over which kind of ball they can hit farthest - tennis, super ball, or hardball. They still delight in breaking in a new glove. They still insist on measuring their long ball, and they cheat when they do it. They still make goofy homemade balls by loading a wiffle ball with all kinds of electrical tape. The pitcher still tries to slip the game ball to the second baseman so he can tag the runner out when he takes a lead. They can still smash car windshields, which I discovered last weekend. And they still run pretty fast when they do it. I don't. They'll even swing lumber at times. But they like aluminum better. And now they have endless discussions over which metal bat is the best. Right now, their fave is a $4 bat I picked up at a garage sale. They like that one better than a $250 DeMarini. Go figure.

Email ThisBlogThis!Share to TwitterShare to FacebookShare to Pinterest
Labels: baseball

Better than banning aluminum bats would be requiring that low-impact baseballs be used in all leagues with kids 12 and under, and that all batters in kids leagues wear chest protectors.

My children are in their 20s now, but when I coached their teams, I used the low impact balls and bought half a dozen batter's chest protectors and made the kids wear them.

No parents complained, many were appreciateive, and few kids complained. The most complaints came from other coaches who whined about the low-impact balls. But once the game got going, they forgot about it becuase the performance of the balls are remarkably close to the "real thing". Probably even closer now.

I don't know if they have, but if Little League baseball hasn't taken the lead on low-impact balls and batter's chest protectors, shame on them.

The thing that got most complaints -- even in the teen leagues, I refused to allow my pitchers to throw a traditional curve ball and took them out of the game if they did. Way too much risk of damage, to even a 16 year old arm.

low impact balls? batter chest protectors? ???? What has little league become? They might as well as have them shoot those little foam balls from a machine on the pitcher's mound instead of risky things like real baseballs. We are turning our kids into wimps at a more accelerated pace than I thought.

When I played (75-78, WE), I remember getting knocked down (think Pete Rose-Ray Fosse style) by a runner when I was the catcher. I was 6 or 7 at the time. Don't even tell me that they don't allow that anymore.

By the way, I am against aluminum bats. Wood bats give the batter more control.

Chest protectors? We just got around to banning steroids! Actually, we do use a lower impact baseball and you can't really tell the difference once a game starts.

So where's the motivation to pay attention to the ball? The "If it hits me, so what?" attitude doesn't seem conducive to developing the player as a competitive person.

If parents can't handle their sons getting an occasional ding with a real baseball, then maybe these parents should have their kids take up something less dangerous like basket-weaving or perhaps a game of solitaire.

Besides, why chest protectors? Shouldn't a batter be standing sideways at the plate? Do these protectors wrap around a little bit?

Believe me, they still hurt. They're still hardballs. They still can do damage, just not as much. I can't really tell the differenece. We're not talking about those rubbery t-balls.

Actually, the worst balls I've ever played with are the softballs used in the girls' leagues. One of those broke one of my fingers when it was hit by a 10 yr old girl a few years ago.

the only real difference i've noticed is metal bats are more forgiving, and have a larger sweet spot.


and cost me a lot more money.

It's good that Timmer doesn't have any bats, except in his belfrey

I was a catcher when I played ball until I was 15. I had my fair share of people try to run me down (on a couple of occasions, I put them down... that was funny). Bruises! Ha! At one point, my entire right leg was just a giant bruise from foul tips and blocking the ball in the dirt.

We used low-impact balls at that time.

Do agree with BFS on the curve balls and pitching in general. I have a friend that threw his arm out by the time he was 16. He was throwing in the mid 80's at at 13 and in 3 years, he couldn't throw in the 50's. He was reduced to playing first base.

My oldest daughter loves softball, and has suffered numerous bloody scrapes and bruises this past month. Some of the other younger teen girls are brutes, and as big as boys, but I think nothing of watching her crash into them.
She took a line drive off her head a few weeks ago and got up from the outfield laughing, as did her teammates. Kids are more resilient than we think, they only act hurt if the parent makes a big deal out of it.
I am not dismissing the fact that some kids really get hurt, but that is to be expected. My experience is some girls will sit out for a slightly sprained ankle, while others, like mine, would have to be dragged off in an ambulance unconscious to keep her from playing. The ball doesn't matter, it's about the kids playing. Some are going to get hurt, no matter if you use a wiffle ball or not, there will always be something.

The only time balls come off an aluminum bat faster is when grown adults are using them.

I doubt they are too many kids jacked up on Barroid juice in t-ball through 13 years old.

If they are you'd find them easy. They are the kids who can't gety a helmet to fit. Also those kids could just be Irish! lol