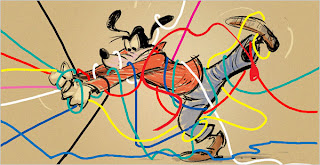 Yesterday, I told you that Northampton county council has short circuited the bidding process for the county's computer services, leaving only one, very high, bid on the table. This will end up costing taxpayers $1.5 million. Today's Express Times and Morning Call include some of council's goofy justifications.

Charles (I'm an expert on everything) Dertinger: ''The playing field has been opened up. Everybody now knows each other's numbers.'' (Um, Charles, that only helps the taxpayer. The next set of bids would be lower, and you were told that during a public meeting.)

John (I want to be exec) Cusick: "I think the administration really needs to look at how they wound up in this situation with only one responsible and responsive bid to the RFP.'' (John, that's because you refused to let them rebid the package. That's an easy one, but maybe you should study it in a committee for a few years.)

Ann (I wanted to be exec first) McHale: ''It's going to get to a point where no one is going to want to bid on county business because if it isn't the price the county wants to hear, they are just going to reject the bids until they get something they want to hear. I don't think that's fair.'' (Newsflash to Ann - you represent the taxpayers, not the bidders.)

Council's concern that no one will do business with the county, is pure manure. As long as they're there to throw our money away, the list of potential vendors will be long, but not so distinguished.

Coucil Prez Grube made the right call for the county. A simple rebid will result in cheaper bids and more options for the county. That's in the best interest of the county and its taxpayers. Instead, we're stuck with one high bid, a formal protest from one of the bidders, and Angle intends to sue next week.
Posted by Bernie O'Hare at 6/28/2007 12:08:00 PM

wayne is right, but in defense of Annie, she makes a point. Preparing bid submissions costs a lot of money. there are some areas that have such a bad reputation (and NorCo is one of them) that some folks just don't bid. view it as a waste of money.

That's a crock. There is no shortage of bidders for county services and goods, and the county has made efforts to expand the base of people willing to bid. The cupola is a perfect example. First time that was bid, the price was way too high. That's the county's right. It can reject a bid if it thinks the cost is too high. The county had the project rebid, and the second set of bids was about 60% of the first. Under McHale's goofy logic, we shouldn't rebid projects and should just pay more so we don't scare off bidders. But when we do, we get a
better price, and that's better for the taxpayer. Council is there to serve the taxpayer, not special interests.

re-bid this one a no brainer of the highest order, is my opinion!

that's a crock? really? and you bid for government work how often?

my point was (hold your breath) that governmental bodies with goofy reputations, inconsistent bidding practices, etc, scare of potential bidders.

Larry, I don't think the exec can veto a resolution. Obviously, he could sue or just ask council to reconsider its folly.

We all goof. But I don't know if these council members are willing to admit they blew it.

I should not have called your argument a crock and I apologize. Please don't beat me.

I've seen the bidding process in action for years in NC. Most of them go off without a hitch. I don't think NC's procurement division has a goofy rep. The county does not suffer from a shortage of potential bidders. if it is seeking some specialized service or goods, it sometimes needs to advertise outside the area.

Terry Beidleman, the current procurement officer, is very porfessional and so is his staff.

So I don't share your view that NC has a bad rep for bids.

Perfect example of way too much government!
What is Lehigh Countys' spend?

Throw in each of the 52 local municipalities, my God (Bernie), will it ever end?

Someone said LC only sdpends half that amount, but I don't know. I'll look into it.

Next week is almost gone....and still nothing new about Severson.

Anon, I have a big post almost done about Severson, what people say, who uses him, who doesn't. I want to check a few things in some campaign finance reports before I post it. I intended to get down there early this week but was unable to do so because of my work as a title searcher and other stories I've been posting.

Once that is done, I'll be putting everything together in letter form because I intend to send it somewhere. I'll post that, too.

I think the Severson story is more important than anything else I've blogged about.

Just don't make the good candidates look bad because they use him. Some may be using him and not knowing it.

You're right about that. I've learned that from some of my discussions this week.

You're a brave man! Do you get along with the morning call?

Up until now, yes.

The Annie for exec. and Lisa defense group are on the same page and same folks. Her point on this issue was dumb.

Not true anon. I offered a scathing critique of Anne--she is independent/her appointment to council; her slaven position to the courts/her daughter's job; her insurance position on the self insurance fund; I will add her votes on the LANTA board to hike fares and maintain the Greco-quo; her lack of policy acumen. Now this "goofy logic" on the biggest rip-off in the county-info services. Lehigh County is doing it half the cost!

Though the Blogmeister corrected one of my fallacies which was she echoes Angle. Thank God. So Go Anne Go...I have said she would win in a multi-candidate race facing all men. Not rocket science to figure that one out. However, Heckman would would have a legit chance though his showing in bethlehem raises concerns.

Ann McFail said Ann (I wanted to be exec first) McHale: ''It's going to get to a point where no one is going to want to bid on county business because if it isn't the price the county wants to hear, they are just going to reject the bids until they get something they want to hear. I don't think that's fair.'' (Newsflash to Ann - you represent the taxpayers, not the bidders.)
d" .....Ann McFail, Is that what you do when you go grocery shopping or if you need tires for your car?

By Joe Nixon Of The Morning Call

Northampton County Executive John Stoffa said Friday he'll appoint an ad hoc committee to look at the county's purchasing process in the wake of apparent paperwork missteps by two companies that resulted in the exclusion of their proposals for a large information services contract.

Stoffa said the committee would look at streamlining the process and reducing errors. He said the review will look at areas including contract formats.

"If we have two of three people making mistakes, maybe that says something about our process," Stoffa said. He added that "just from what I've been gathering here and there, it's time to look at how we do this."

I saw that. Stoffa is always asking, "How can we do better?" There's nothing wrong with that, and bidding procedures are always complicated.

But the fact that some companies screwed up their bids is no justification for county council eliminating them and leaving the county with one high bid. Council was told they'd come in much cheaper if the project were rebid. County council owes a duty to the taxpayers, not the bidders. And council should not force the taxpayers to suffer just because it thinks Stoffa could do a better job with bidding procedures.

I think there's a little more going on here. Of course, council is being vindictive. But McClure and Dertinger are also very partisan, and I'm beginning to wonder whether they allowed their partisanship affected their judgment. Council's decision effectively cut out Computer Aid, Inc. I did some checking, and it's prez gave $11k to Dent. He's a big-time contrtibutor, and usually to Rs.

I don't think McClure or Dertinger wanted CAI to have a shot at that contract, and that's why McClure started things off by saying everyone is happy w/ ACS. Instead of reviewing RFPs on the merits, this council may have been looking for an excuse to punish someone who gives to much money to Rs, and who contributed to Dent when Dertinger opposed him.

"How much bang for the buck are we getting for that amount?"

I am not defending ACS, nor do I work for them. I do know that they employ between 15 and 20 people at the County.