I am Not Bernard Kieklak: I am St. Bernard 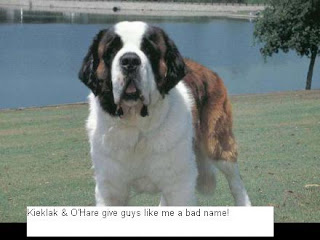 Not in grade school. Not when kids call you Bernard the turd.

All this brings me to yesterday's email from Chris Casey. It includes a warning from his wife. "Last night Mrs. Casey turned to me and said that Channel 69 was doing you a disservice. They kept showing your picture from your blog on each newscast, and she felt that people would think that you, Bernie O'Hare, was Bernie Kieklak, Boscola's COS." I quickly brushed these concerns aside.

Who could possibly be that stupid?

I found out. When I finally made it to the local courthouse today, where I search titles to support my luxurious lifestyle, I got the cold shoulder from nearly everyone. They usually don't act that way when I shower, and today I even flossed!

I'd walk into a room, and people suddenly would clam up. The recorder's office was as quiet as a funeral home. I checked my zipper, but all was secure.

Finally, late this afternoon, a young lady I know called me. Her boyfriend actually works at Channel 69, and told her I had said all kinds of disgusting things about women.

"Yeah, it was on, like ... the news, Bernie. There was even a picture of your blog and you and that Rob Vaughn dude and he said you were saying real gross things and ..."

"It was a different Bernie."

It took awhile, but I think she believes me now.

As long as you bring the brandy when we're stuck in a blizzard...

Bernie,
You are not alone! I'm often confused with Kissling's sauerkraut and related to Pat Kesling, none of which have anything to do with me. Life goes on and your Father, known by me, was a real Saint Bernard and apples never fall far from the tree, is my strong opiniom! Keep up your great work and your family tree will stay in tact!

Good to see you genes included a self deprecating set!

Ahh Bernie, the sins of the father truly are visited upon the sons. In your case through your accursed first nom de plume. If only your heritage had been different and your first name was Cyril, Oliver, Daniel or some other derivation you wouldn't be getting confused with the dastardly Mr. Bernie of Boscolaville.

I love getting phone calls from bill collectors who think I'm you. I just go along with it and say the most inappropriate and horrible things especially when they're women. I love pumps too, must be something about Bernies in general.

If I were the dog, I would so O'Hare and kieklak for slander

My dad hated his name, so I was not another Bernie myself.

Instead I was born Joseph. (The J in their names BTW) Spike came in my Teenage years and has stuck since.

It must be an Irish thing.

Bernard (not Bernie)
You got old looking!!!
Theresa

Hello, I am proud to say that I Michael Kissling with the americannised name of Kissinger desendent of Michael Kissinger who arrived in the USA on the 9th of September 1764 . Am an hier to the old kissling sauerkraut

Hi Michael Kissling,
I have ancestors with just that name. I am from Germany. My furthest known ancestor with the name of Kissling was born around 1560, Nicolas Kissling (like St. Niclaus). His son, Lorenz Kissling, was born 1601 and a wandering carpenter. Anyway, there are a whole list of Kisslings. The names Kissling, Kesling, Kieseling, Kiessling,... are pretty much all the same. They derive from a certain food, something like cream of wheat but slightly fermented, made with juices of fruit and the flour of maybe potatoes or other starchy foods.
Anyway,... greetings from Hawaii, Silke Pfeiffer