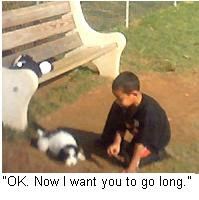 Daviay Legrand, a four-year Allentown boy, died Wednesday when struck by an out-of control police cruiser. It was responding to an emergency downtown call. I had just left Allentown myself, where I coach a few boys not much older than him. I saw lights but was too busy to pay much attention. I needed to get home. I had important things to do.
Thursday morning, I read every political article in several newspapers voraciously, and did my daily tour de blog. I only glanced at the news about this young life cut short. I was in a hurry. I had more important things to do.

At the courthouse, I was working on a monster search of a property spread out over four different municipalities. When people stopped to talk about what had happened, I ignored them. I had more important things to do.

Last night, after I got home, I happened to see Daviay's picture and his beautiful and lively eyes. I thought immediately of my grandson. My grandson, at that age, walked those same streets. I no longer feel so important.

Daviay will never experience the exhilaration of smacking a baseball while his teammates cheer him on. He won't play pick up games of baseball, pickle or football with the kids in his neighborhood. He won't engage his grandfather in lengthy discussions about different episodes of Spongebob. He won't have his first day of school. He'll never romp with his first dog.

But we're the ones who've lost. Children like Daviay, with his bright and hopeful eyes, remind us of all that is good about us. When his spark is extinguished, the light of our humanity fades.

I'm not a parent, but some of my fondest memories are from the time I spent working at an after-school program while in college. I learned more through those kids than I did in a class room. Each of those kids left a lasting impression on me, all for the better.

There is an African society that greets each other by asking the question, "how are the children." The question shows what they value most in their society: the future of their children. It would be nice if we, as a society could begin asking the same question.

Thank you for your commentary Bernie, and thank you for coaching those little leaguers. You will have an impact on them for a long time.

Bernie, I know you don't watch TV anymore, but thought you might want to know that this tragedy has made national news.

as a frequent critic of city hall, i must in all honestly give credit when its
due. Mayor
Pawlowski apparently took some very intelligent actions wednesday night to avoid an
explosive
reaction to a very unfortunate situation.

"There's no tragedy in life like the death of a child. Things never get back to the way they were."
- Dwight D. Eisenhower

Your commentary is beautiful, and should be food-for-thought for all.
I read your post on MCall this morning, and "replied" for the first time in my life. (Reply on page 4 if you wish to view)
Went looking for you;
"Googled" your name and found you here.
The rest of the comments left me more disturbed than words can express.
Believing there must be some recourse (beyond finding a "cure" for ignorance which appears to not get the required funding), I would be interested in your thoughts.

Bernie, yes, your comments were very touching and yes, this was a terrible tragedy.

But who said the police car was "out of control?"

The two officers were responding to reports of shots fired, and a shotgun was found near that scene. The officer obviously was making haste to respond, but was he "out of control?" No one knows, and we won't until the investigation is done.

More importantly, can anyone put themselves in that police officer's shoes today? How do we think he feels? I've seen some bad cops over the years, but I have never seen or heard of one who would consciously say "I'm going to be reckless and kill a toddler tonight." My money says that cop is as distraught as the boy's family -- maybe more so given that his chosen field was to protect innocents like Daviay.

Finally, what would the reaction from neighbors have been if that shotgun holder had hit someone and the cops had taken their good old time getting there?

This was a tragic accident, but let's remember there were victims that aren't immediately apparent to the witnesses. And let's be careful what we print and say until the facts are known.

I thought about just what you mentioned several times last night. The police officer in question, I'm sure, is going through hell. And you're right. And I don't mean to do anything except express my sorrow at our shared loss. Children are what make life worth it.

I'll be sure to drop you a line this tonight or early next week.

Bernie, is there any way you can contact the Morning Call and ask them to please moderate the comments boards on this topic? It's truly frightening what is going on there. I sent them an e-mail but maybe you have better contacts. Isn't Bill White supposed to be the moderator?

Thanks for your eloquent words!

The Morning Call site is freedom of speech in action. You are getting a picture of how truly divided American society is between the haves, and have nots. I saw the disgusting post about fencing the anumals in Allentown. I'm not so sure they don't need a fence to keep the hateful bigots out.

It appears the Morning Call got my message, because they removed most of the threads on this topic. Thank goodness. Someone was going to get hurt.

Unfortunately, that free speech probably came at the expense of a family who should have been grieving. I was shocked at some of the things written.

1) I have no clout w/ anyone. Most reporters hang up on me.

2) Thanks for bringing this to the attention of the MC. That site is not a free speech site. It bans content that is "unlawful, harmful, threatening, abusive, harassing, torturous, defamatory, vulgar, obscene, libelous, invasive of another's privacy, hateful, or racially, ethnically or otherwise objectionable." Much of what I saw was very hurtful.

If the reports are accurate, your choice of the word cut, hurts!

What an eloquent and touching sentiment to a child's life cut short!

Your words described a community's pain and a tragedy like so many others that happens when we are all too busy to simply pause, reflect upon its meaning, and say a prayer.

I've been laughed at by friends and family for years because I always ask a straightforward question that no one can answer:

"Wouldn't it be nice to just enjoy the blessing of being alive without having to hear sirens for just one day?"

Sirens mean police and a crime. An ambulance and a death. A firetruck and a tragedy.

I keep hoping for the day when I don't hear a single siren all day long... but it hasn't happened yet.

We hardly pay half attention to sirens anymore because, LIKE YOU SAID SO ELOQUENTLY, we are just too damn busy to stop and think about what it means.

Thank you for reminding all of us about what it really means and why it's so important that we pay attention.

I have always had a penchant for country western songs. This one written by Garth Brooks hits home. Although the circumstances of a child's short life is much different, I believe the sentiment is the same.

If you want to truely do something really incrediable, forgive someone and make a friend of an enemy. Otherwise its all just words.

I am not a parent or anything but i do have a little brother 3 years old. once i heard about Daviay it hurt me. i got real sick to my stomach. i thought why would police not have a brain to stop and think before making a stupid mistake on not putting their lights or sirens on. I went to that site on friday night. it was hard for me and my friend to sit there and watch it. we were both hurt. i started crying. Daviay, baby, i didnt know you or your family. but baby, your going to always be missed.

Daviay's psuedo step father,
Jason Marcelle, was charged with killing his 3-year-old daughter, who died after being beaten and severely burned.
http://www.nytimes.com/2007/12/08/nyregion/08girl.html?partner=rssnyt&emc=rss

Listen you dumb ass that is another jason marcelle fucking idiot. you ever hear of people with the same names??? look at the ages dummy two different people. You people are lames

Daviay's psuedo step father,
Jason Marcelle, was charged with killing his 3-year-old daughter, who died after being beaten and severely burned.
http://www.nytimes.com/2007/12/08/nyregion/08girl.html?partner=rssnyt&emc=rss