Sitting in the Peanut Gallery With John Morganelli 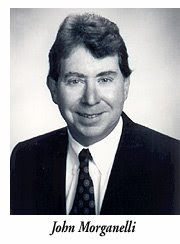 I was pretty nasty to Northampton County DA John Morganelli yesterday. I called him "Farmer John," made fun of his new book (I'm really just jealous), and even belittled his crusade against undocumented workers. I've done it before. A few months ago, I falsely reported that John was building a wall around the Lehigh Valley to insulate us from dreaded illegal immigrants. It would be funded by surcharges at Taco Bell.

After casting my stones, I was having great fun in the peanut gallery at last night's lengthy meeting of Northampton County Council. The suits were trying to save $2.6 million in public funding for a Wind Gap developer's road. This project was funded six years ago, but has gone nowhere. Council was finally ready to pull the plug. Ralph Stampone noticed that whenever the suits started talking, their noses grew longer. And from behind me, John Maher whispered that WWII was over in less time than has been allotted for that road. Some goofy old guy in a gigantic cowboy hat kept insisting they were really serious this time. Really! And his Green Knights had a gazillion dollars to back the project. Council finally flushed this project, no thanks to Lamont McClure or Charles Dertinger.

While we were laughing at these developments, somebody plopped right next to me in the peanut gallery.

It was John Morganelli! Holy cannoli!

He nailed me before I could run and hide. No wonder he's the DA! He laughed off yesterday's blog post, and even agreed it was funny. After this, I "introduced" John to Will Power and asked for John's support. I'm trying to "clear the field" for Will. Before long, John was laughing in the peanut gallery with the rest of us.

Morganelli is a very powerful Democrat, and I do pick on him at times. But I do respect and admire him. He's very accessible, personable and is probably Northampton County's best district attorney. Obviously, he has a great sense of humor. I just don't like his taste in county council candidates.

One final point. During last night's meeting, Nazareth councilman Jack Herbst made an eloquent pitch for county participation in a skate park. Council Prez Grube whispered, just a little too loudly, that he couldn't wait to see it built so he could watch me fall on my fat ass.

John is a funny dude. Glad you all had a good time. Also, glad to see that Wayne Grube finally is starting to practice the open gov't thing... just wish it would have been a bit more appropriate.

Funny, how people behave when in person.
The media sure can distort and leave un-answered questions, but when the parties are face to face and sometimes, in your face...

LST, Well, I can't be a miserable bastard all the time.

But the real question: Did Ralph S take you to Tic-Toc for some of that very famous pie....??

Ralph Stampone ran out of the building when he saw the DA, so I'll have to wait to try that pie.

Hey Bernie, How about we ask my buddy Shawn Miles to immortalize a NCC member or two?! LOLOLOL!

This poster does not understand the overwhelming desire to turn the nation over to illegal immigrants but is grateful to the
blogowner for the open forum.

In this day of Big-Brotherism, free speech is not often free.

yo r. moshki, what you talkin' 'bout, willis...this nation was founded by illegal immigrants. its the european-american way, dude!

Morganelli gets to go after former easton Police Chief Mazzeo.

If he is guilty of assulting a minor I wonder if he will get the trademark "Scumbag" title from out DA at a press confrence.

This guy throws that word around like Donavan McNabb tosses interceptions.

Don't worry, I'm not with Rush on football.

Skatepark? I've got one in storage I might let 'em have for free.

Anon 11:20, I wasn't kidding about that. Jack Herbst has been working on a skateboard park design for about tweo years and has support from other communities. If you have stuff you'd like to donate, I'm sure Jack and the kids would appreciate it.

They were 13 British colonies...not states.

Who knew? Eventually all the native peoples of the 500-plus soverign nations who were living here for hundreds if not thousands of years prior to the arrival of Moshki & Co.

When Anon. gives all his property to a family of illegal aliens then we will know he mean what he say.

After all, if we are the interlopers and La Raza, et al are right, we need to leave while we can still walk--with just the clothe on our backs.

It's not just the southwest which Aztlan claims but the lower 48, Canada and Alaska.

If they demand Hawaii, let's throw it in or make them swim for it.

r. moshki, dude...share what ever it is you're smokin'! ain't nothin' like some good repbublican smoke, dude!

lvdem,,,,,,sounds like a major ass kisser..." funny dude",,funny these nuts.
Outside of the lehigh Valley, mostly Pittsburgh area John "funny dude" Morganelli has a reputation of being corrupt.. ? why ,,no idea,,he maybe an ass,but I never heard of corruption and his name in the same sentence. But it is fact that is how he is looked upon in Pitts.in Philly he is looked at as a " BARNEY Fife"...I totally enjoyed when "funny dude"went after the african-american-female judge from Philly ,telling everyone how she should rule in her courtroom.After that,,not only did "funny dude " ruin his own chances of being attorney general, but he scared me...If he really believes it is place to call out judges outside of his own county,,telling them what justice is or is nt,,,and if they do not do it his way, they are wrong...that is a dangerous man with power he should not have.

Nick, I appreciate your views, some of which I've never heard before. But let me tell you this. I know Morganelli. He does have a good sense of humor. I have taken shots at him when I have thought he was wrong and he has never held it against me. I have seen him peremptorily dismiss charges against people exercising dissent about the war. I have seen him stand up to judges. And more of us need to do that. They're nothing special, although they think they are. Those who don't stand up are are the real ass kissers. And as far as LVDem is concerned, he can take care of himself. But your conclusioon is way off. If you read his blog, you'd apologize.

Ya' see, left-wing individs.
generally prove to be as equally destuctive as the James Dobson-Michael Savage types. There is a lot of illogical rhetoric from both but little substance.

"this nation was founded by illegal immigrants"--
beyond idiocy. Read the Declaration of Independence.

No one is denying the Caucs stole the country and committed genocide in doing it. that was then--it is not relevant to the situation of today unless these Anon types want to effect a monumental 'reversal-of-fortune'.

if one is in favor of the re-transfer of the U.S. to the "native peoples," then one needs to put the 'ole wallet where the fatmouth' is. Do what JC preached--give it all away!

Otherwise, please spare us the drivel--it's insulting to the listener as well as the speaker.

"This poster does not understand the overwhelming desire to turn this country over to illegal immigrants."

There seems to be a lot of talk going on about what shouldn't happen. Unfortunately, too many people put all of their attention and energy into "fighting for a cause" instead of focusing on what they want to happen. No wonder there are so much negative things going on in the world. May I suggest that instead of doing this, focus on what you would like to happen and take a proactive stance on the topic. Put that fire and passion in making this a better country instead of disagreeing over issues.

good luck with it boys

Lori, I don't think "fighting for a cause" is a negative thing. I don't think it's negative to point out a government that operates in the shadows if it results in open government. But your point is well taken. Pointing out the negative can be destructive at times. Guilty as charged. Thanks for the constructive criticism.