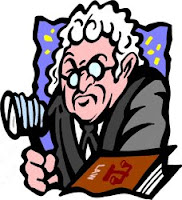 Northampton County's citizens elections committee met last night in Courtroom #1, surrounded by portraits of scowling jurists against whom final judgment has long since been rendered. Some say the place is haunted, and that those brooding and dark paintings move every night. Last night, I wondered whether these claims are true. When the elections office made its evening presentation concerning those controversial touchscreen machines, the sound system began making erratic noises. And when the panel finally adjourned, those judges looked much nastier than they had when I first walked in. Those dudes know a snow job when they see one. Neither they nor I was impressed.
Last night's star was Voting Registrar Debbie DePaul, who repeatedly told told us "we're doing very well," and she has a "wonderful staff." She'd even like to close the office for an hour or so to have coffee with her underlings. Her leading man was Deputy Howie Erney, who demonstrated what elections workers go through in setting up and shutting down the WinVote system. He optimistically told us things keep getting "better and better" and that electronic touchscreens are actually easier to operate than those pesky lever machines. His explanation for the problem in tabulating results was that the old geezers who work polls on election day don't know what the hell they're doing. They don't know how to use a USB storage device, a simple flash drive system, to transfer data from one computer to another. He didn't put it that indelicately, but that's certainly what he meant.

According to documentation obtained from BlackBox Voting, the Pennsylvania Department of State reluctantly certified WinVote Version 2.0.2 in February, 2006, noting twelve specific problems. One problem is exactly what frustrated those old geezers. When an AVS rep tried to use a USB storage device to tabulate results, the system failed. Well, AVS made all kinds of promises to fix the problem. Two elections later, that remains our biggest obstacle to a vote tally.

Last night, when Howie Erney confidently booted up his system, I was shocked by something else. The system is not WinVote Version 2.0.2, but is instead WinVote Version 2.0.3. When I started questioning why we're using a system that has not been certified by the state, I was told to take it up with them. Suddenly, our wonderful elections office didn't want any more questions. Even if that version was certified, there remain allegations that what we see is not what we got. According to BlackBox Voting, machines with identical appearances have different components "under the hood."

Citizen panel co-chair Russ Shade has the same questions. And he wants answers from the state as well as Advanced Voting Solutions. "They have this nasty habit of not returning phone calls."

During last night's meeting, chair Peg Ferraro noted several emails from poll workers about phone calls that weren't answered on election day. Gordon Santee, a 78 year-young voter, decried WinVote's lack of privacy. A helpful poll worker looked over Santee's shoulder as he voted. "We need privacy when we vote. This is just like the Soviet Union." DePaul actually tried to defend this lack of privacy, but Santee told her any votech could make dividers. Not a bad idea considering that Santee is one of those old geezers.

Councilman Ron Angle mildly noted the unusually high turnover in the elections office. "I don't get the feeling that someone is in control. There hasn't been a lot of stability there." And that's all DePaul needed for yet another eruption.

Angle: "Frankly, I believe you are a part of the problem."

Angle's right. DePaul is undeniably dedicated, but the stress of a new system and her own personality work against her. Her office is unfriendly and unhelpful. Committee member Dick Benner nailed this in the first meeting. "People must be made to understand you're there to help them." I don't think DePaul gets that.

Those who came: Advisory committee members Russ Shade, Jack Bradt, Peg Ferraro and Dick Benner attended last night's meeting. County Executive John Stoffa and Director of Administration John Conklin were present. And it was encouraging to see four members of council in the peanut gallery. In addition to Angle, Charles Dertinger, John Cusick and Tony Branco dropped by. Walt Garvin, Joan Rosenthal and Ralph Stampone, members the elections commission, braved the cold weather for an evening in the haunted courtroom.

Meeting Schedule: This advisory group will meet again at the courthouse on the following dates: February 13 (4 PM), February 21 (7 PM) and February 28 (7 PM). If you can't attend, you can contact this committee with your concerns at voter.info@northamptoncounty.org. When minutes are available, I'll post them on the left sidebar.
Posted by Bernie O'Hare at 2/08/2007 01:00:00 AM

Questions were raised about the AVS Winvote and they said to speak to the state ?

Its the County that purchased !

What did they say about the fact that the machine is different from what was certified ?

Well spotted on the software version number at the meeting !

This would mean that they had done an upgrade and loaded a new version of software on the voting machine which is different to the previous version.

With regards to certification, it would have required an engineering change request from AVS to the ITA and a re-certification of the new software prior to deploying it to the county.

You might want to check this with the county.

I would suggest that you and the advisory board get some freedom of information requests in to the county and the state with regards to the AVS Winvote along the lines of the concrete information you guys now have about both the hardware and the software.

Was the information you downloaded from BBV presented at this meeting ?

If so, what was the reaction ?

Since the machines are certified by the state, the elections office said we should talk to them.

The info from BBV was made available to the committee. They are trying to find out what is going on, both from the state and AVS. And they want to be able to see "under the hood."

It should have gone instead to your posting "Citizens' Election Panel Questions Voting Machine Certfications."

I realize I made the same mistake in posting my Goggle-China censorship comment on one of your posts re voting machines - a mix-up that began with the censorhsip comment by my Billy Bytes blog designer Brian.

He designed it while I was in the hospital, based on instructions he received from me via my wife, Kathy Parker, and older daughter Sarah Parker-Givens.

So I'm still not up to speed on how to use it, obviously not with the expertise and prolificacy your "Lehigh Valley Ramblins" displays.

Even my blog's bites aimed at the bare asses of Northampton County's and its seat Easton's officials and politicians may lack the viciousness of your posts.

But I know for sure that you're among the many to agree that my posts ramble farther afield than hours - notwithstanding the title of your blog.

Things are getting better and better? maybe they are getting their quotes from George Bush's handbook on Iraq!

I have confidence that we will learn for sure whether the BBV accusations are valid. The allegations are being treated seriously, not by the elections office, but by the administration and citizens' election committee.

Thanks for providing this service to the voters of our fair county.

This is news for which we should hold a press conference.

Let's write up a one page summary, stand and read a written statement in front of the courthouse declaring that... the machines used in the November 2006 election in Northampton County were uncertified and therefore election results cannot be certified.

We, concerned voters, ask for a careful re-examination of these machines. The county should be prepared for the need to repeat the November 2006 election with a certifiable and certified method.

the only fair thing to to do in this case is to have a revote.