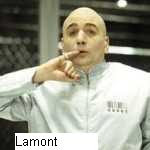 Two-time loser Lamont McClure is at it again. He's running for county council. He told the Morning Call that if we elect him, he'll start a child exploitation unit. And this time he means it! Really! He brags about his "perfect" attendance record as a selected member of council, plays the open space card, promises to shake down criminals who don't pay their fines, and takes a bow for his code of civility. Unfortunately for Lamont, he now has a record. And actions speak louder than words.
1. Child exploitation unit? First of all, why is Lamont calling it a child exploitation unit? Shouldn't it be a child exploitation prevention unit? No matter. He's just playing to the crowd. We've heard it before.

In his county council audition over a year ago, McClure promised "to address the issue of online sexual predators and perhaps create a county child exploitation unit." He explained that the county could hire an investigator and set up the software to nab pedophiles. Council not only appointed McClure, but gave him the chair of council's law and order committee. In its three meetings, McClure never mentioned a child exploitation unit. And this year, he has yet to schedule a hearing. Yeah, he must really care.

2. McClure's perfect attendance record? Council's eight standing committees conducted twenty-two meetings last year. Every member of council is encouraged to participate in every committee. It's an accurate gauge of the time and effort each councilperson devotes to government service. McClure attended just four meetings last year, and is tied for last place. He's a slacker.

3. Open Space? McClure is one of the councilmen who actually voted against Stoffa's open space plan, Northampton County's first concerted effort to curb rampant overdevelopment. Although The Morning Call labeled Stoffa's plan as a "farsighted approach" that will save us money in the long run, McClure didn't want a tax increase on his record. He actually wanted to invade the county's rainy day fund. Council changed course when it learned it had no authority to do so under our Home Rule Charter. But not Lamont.

4. Criminal Shakedown. Despite all his braying about improving our criminal collections, he has never even visited the office. He wouldn't know the employee who actually does collections if he fell over her. But why should Lamont bother to meet her? He just wants to get elected.

5. Code of Civility. This is a thinly veiled instrument to muzzle councilmen and citizens who speak truth to power. McClure claimed to be concerned "the public has not been getting the message about the good work" being accomplished. His solution? Silence dissenters. It's an obvious First Amendment violation.

In practice, McClure himself has been a regular violator of his own code. As recently as last Thursday, he repeatedly interrupted Council Prez Grube and called a county employee "disingenuous." He popped on this blog anonymously, lied about who he was, and called me a "goo goo." I don't know what the hell that means, but I'm pretty sure it wasn't intended as a compliment. So much for his code of civility. I outed him.

The Real Lamont McClure. The real Lamont McClure
* pockets a $1,000 check on November 16 from developer Abe Atiyeh, who's always getting tax breaks from local governments.
* ignores Lower Saucon Township residents in his own district, who are concerned about the possible destruction of the historic Meadows Road bridge.
* violates the Sunshine Act and tries to bully me for pointing it out.
* wants to spend $500,000 for lavish council chambers when courthouse employees have not seen raises for over three years.
* lavishes Bethlehem with $700,000 for shrubbery and signs along a road while Gracedale windows leak all over seniors.

It looks to me like maybe Lamont will be building a "Bernie O'Ohare Exploratory Investigation Unit."
Have to keep those rabble rousers down, you know!

All I know is that Bernie doesn't have to worry about being exploited.

A "goo goo" is a kind of doll. So you're a goo goo doll, Bernie! I think its a good thing.

I am glad to see the reporter from the Express-Times who I spent much time discussing the Meadows Rd Bridge, not only got my name wrong, but, missed several important points that I made about the bridge.

As far as Mr. McClure goes, I almost wish you wouldn't have "outed" him when he came on the blog. I would like to see his comments now.

Anon, Lamont would know more about dolls than I.

LST, Who cares whether the ET calls you Stephanie or Samantha? Your concern is the bridge, right? When the ET cast a public spotlight on your preservation efforts, it did you a favor. Think about that.

I am sorry Bernie, but when one has worked as hard as I have to get this issue out in the open, it is very important. Plus if someone reads the article and might want to contact me with information about the bridge or this issue, then they would be trying to get in contact with the wrong person.
I am still trying to get the MCall to do a story on it. I know Paul Muschick told me he is working on a story about Northampotn county bridges.

Reporters are human beings, too. A reporter covered the meeting and cast a spotlight on your issue. Now she didn't write the story the way you would have written it, but she wrote a story. It was a good one. You say you have to "get this issue out in the open." That is not going to happen when you berate the people who are giving you coverage.

You mention Paul Muschick. He's been reassigned. But there's another exazmple. You came on this blog several times and let him have it. Do you think that motivated him to write a story for you?

Think about it. I know you care.

LST, The only reason I can point this out is because I've made that mistake myself. It's amazing how I recognize in others what I don't see in myself.

You must be in a bad mood today Bernie.

You'll have to point out where I ever went after Paul, I don't remember. I keep in touch with him about the happenings with the bridge on a regular basis. I was not aware that he was reassisgned.

Now about our friend McClure, this eploitation prevention unit, shouldn't the DA's office where his wife works be doing that?

In several posts on this blog, you've complained about Paul. And now you've complained right when the ET has written a story about your plight. I'm just pointing out that does not inspire interest from reporters. They're human, too. Something to consider.

As far as a child exploitation prevention unit is concerned, this is something the DA should be doing, not Lamont. Morganelli has probably thrown it to Lamont to use as a campaign issue, and then John can say, "It's a great idea. Blah. Blah. Blah. Is that an illegal immigrant?"

I know that this is OT to a point, but you know first hand the problems I have with the township owning up to its responsibilities in enforcing the weight limit on the bridge. Plus the county has been ignoring this bridge for 30 years.

As you may recall in the notes I sent you from the meeting between the county and the township, it is stated that the bridge is in danger of collapsing. To me this is a serious issue. Everytime a truck or a car for that matter drives over the bridge, that person may end up swimming in the Saucon Creek. I brought this point to the reporter's attention and felt that should have bee the focus of the article. I feel that if this bridge is dangerous, then it needs to be closed. But both the county and the townhsip seems to ignore this issue. This is a Northampotn County owned bridge and becomes a tax-payer's liabilitlity if it collaspes and injures someone.

I even had columist Bill White out to the house and while he was there, we saw a possible overweight truck drvie up Meadows Rd. Yet, I know he never wrote a piece on the issue.

McClure is so pathetic that last spring he made Norco's Democratic Committee by just receiving two (2) votes in his voting district. They had to be just his own and his wife's vote. He still listed his honored membership on his credentials published with his announcement in the Morning Call yesterday. Joe Long must be proud.

a "goo goo" was a term of derision used by the late Mayor Daly of Chicago in reference to those who professed good government, and criticized his somewhat Stalinesque approach to democracy.

Anon 3:38, I never knew that. Thanks. Whew, if Lamont is emulating Daley, we've got trouble ahead.

Someone probably advised Lamont to campaign against child exploitation because he looks like a child molester.

And the Academy Award for best performance in a "woe is me, I'm such the victim" role goes to.....LST for her performance in "Stone Bridge Over the River Saucon!"

Well, I just wanted to comment on McClure's wife wandering around the courthouse, having the nerve to ask the "severely" underpaid county workers (who have not seen a raise in 4 years) to sign the petition to get her husband voted in. (I do hope this was on her own time and not county's.) Yes, we were definitely "not" impressed, especially when she had the nerve to say that her barely present husband is concerned about the plight of the county workers'--and then further claimed that "everyone" had a cost of living raise (can I parade my measely, pathetic paycheck to prove her wrong??--me and my coworkers never know whether to laugh or cry over the entire mess). Maybe someone should tell them that if Lamont wants in on the council that he better start learning about the county and its' workers before even asking for votes--and perhaps showing his own face instead of sending the wife to do his dirty work. Talk about insert foot in mouth!!!--real intelligent.

Gee, I wonder why she didn't ask me. This is VERY interessting. She's barred from engaging in political activity while performing the duties of her position in the county. And she clearly has no clue what is going on in the residual unit now, does she? This merits a separate post later this week.

I want it to be known that I wrote the message timed at 12:21pm about him and his wife being the only voters for him and his wife to get on Norco Dem Cmmttee with Long. I connect my name to everything I write. I also want to say that it was not tasteful for that anonymous writer to say that Lamont looks like a child molester. That kind of low blow is not welcome to be associated with my race against Lamont. I would like to earn your vote and that of your family, friends, spouses and neighbors, WITHOUT such trash talk. If I knew who said it and if I learned I myself would reveal the actual name of the person who made that comment, and let him or her be accountable for it, with the appropriate embarrassment that would surely be attached to those who sling such mud.

writen by Will Power