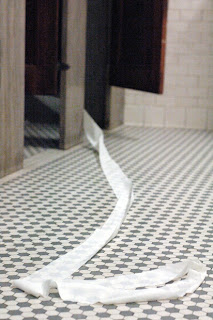 Last night, Northampton County's Citizens Election Committee had its second meeting. Chairman Peg Ferraro had suggested an evening meeting to accommodate working people, and it paid off. Elections Commission chair Walt Garvin attended, and so did commission members Ralph Stampone and Joan Rosenthal. Even Diane Neiper, VP of county council, was in the peanut gallery. It was a small but passionate group, concerned about the most important function of any county government - our elections.

Democrat Walt Garvin was complimented on a "terrific op-ed" concerning the elections process by Republican Jack Bradt. Everyone was very civil, excepting me. I'm a miserable bastard.
This advisory group struggled much of the evening, trying to understand what exactly went wrong with the Advanced Voting Solutions touchscreen machines in our last two elections. Although the machines themselves were described as very user friendly by elections chair Walt Garvin, he listed a litany of difficulties encountered along every step of the way, from acquisition to results. He acknowledged his commission only meets four times a year, a practice criticized by fellow commission member Joan Rosenthal. "We don't have a handle on what goes on."

Although the committee had a lot of questions about paper trails and hacking, there's little that one county can do about that. Fortunately, state and federal officials have seen the light. Twenty-seven states now require a voter-verified paper trail, and a new Democratic Congress is poised to do the same thing on a federal level.

Committee members also heard about other problems in the elections office, and these have nothing to do with the machines: A registrar who publicly labels voters seeking absentee ballots as lazy; high office turnover; poorly trained elections workers who won't offer provisional ballots to voters they turn away; an elections office that doesn't answer the phone when a poll worker has questions; a party chair whose daughter worked in the elections office; an elections commission chair who hosts a highly partisan radio talk show; and a ballot designed to encourage straight party voting.

Dick Benner, who supervised 45 elections before he retired, put his finger on the real problem. The office must become more receptive to the public and candidates. It's not voting machines, but elections workers, who need to become more user friendly.

This advisory group will be meeting again at the courthouse on the following dates: February 7 (7 PM), February 13 (4 PM), February 21 (7 PM) and February 28 (7 PM). If you can't attend, you can contact this committee with your concerns at voter.info@northamptoncounty.org. When minutes are available, I'll post them on the left sidebar.
Posted by Bernie O'Hare at 2/01/2007 01:50:00 AM

They have decieved counties in PA

All the info in the above link to BBV thread gives you all the concrete and photographic evidence you need to see how Advanced Voting Solutions have committed fraud and deception !

Here is a link to the photographic evidence and explanation within the thread on BBV showing side by side the voting unit that was tested at Wyle Labs for sale to counties in PA, and what was actually delivered to those counties in PA

Its not rocket science !

since the Advisory board meetings to investigate these problems are due to commence from 7Th Feb, are you able to communicate the info within the thread from BBV to them, or alternatively, can you post the board members email contact info on this site and I will contact them.

The information within the BBV thread contains direct testimony of two Ex Advanced Voting Solutions employees that explains and proves in detail how Advanced Voting Solutions decieved the counties in PA by testing an old version of voting unit to sell them, and then delivered them a totally different voting unit as the electronics to manufacture the tested version were no longer available.

The outer case is the only part that is the same.

Take a look at the photos and read all the posts in the thread, especially by "Brad Spencer"

If you or anyone else needs further more detailed information please contact me at:

ABOUT THE LINKS IN THE ABOVE TWO COMMENTS.

Your web site is cutting off the end characters of the links I have put in the above two comments.

The first one ends in

The second one ends in