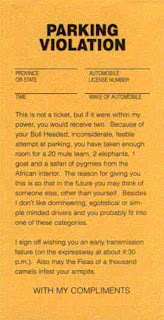 Living as I do, along Nazareth's busy Main Street, I get hammered by parking tickets. Unlike responsible people, I almost always ignore them until a constable comes knocking. When I was younger, I'd jump out the window with a disguise, but Constable Smith always nailed me. These days, he just calls and tells me it's time.

Over the years, I got to Nazareth's magistrate, Elmo Frey, quite well. He would patiently listen to my entreaties, and always had this one word response - GUILTY. He's one of the best magistrates I've ever seen, a quiet guy with a great sense of humor and common sense. He was forced to retire last year, and his wisdom will be hard to duplicate.

Who will be his successor? That's the million dollar question. It's a crowded field. Candidates include Bangor lawyer Yvonne Falcone, Norco Corrections Director Todd Buskirk, teacher Mark Franczk and Upper Nazareth police chief Alan Siegfried. Last night, that field got a little more crowded. Northampton County Deputy Sheriff John Capobianco has entered the fray. He's the one who most reminds me of Elmo Frey, and that's why I'll be voting for him.

Unlike many other candidates, who view this as a part-time job that improves their financial portfolio, Capobianco will be a full-time magistrate. He won't be collecting a government pension while working as a magistrate, and told me he intends to be a proactive magistrate, one who reaches out to the community. As an exxample, he said he'd like to visit schools regularly to explain how the system works. His campaign gave me this announcement.

In December, 2005, Capobianco was certified by the Minor Judiciary Education Board and thereby meets the stringent standards and necessary qualifications required in Pennsylvania. Capobianco attended the required classes and passed the exam, which covered all areas of the law under the jurisdiction of a Magisterial District Judge.

"I am seeking the office of Magisterial District Judge to use my criminal justice and law enforcement experience to help make our community a safer place to live, and to continue a fair forum for justice for all the citizens of our district," Capobianco said.

The court's district covers Nazareth, Bath and Stockertown and the townships of Upper Nazareth and East Allen. The position of Magisterial District Judge, formerly held by Elmo Frey, is currently vacant.
Posted by Bernie O'Hare at 2/07/2007 12:00:00 AM

It's funny how they hammer the residents with parking tickets, but somehow Brian's Professional Cleaning trucks parked at Broad and Belvidere never seem to accumulate any.

Wonder why? It sure as heck isn't because they are putting money in the meter.

Well, there's two guys working the meters. One of them is real nice. I once caught him putting a nickel in my meter just so he didn't have to write me up!

I'm going to get a Brian's Professional Cleaning sign and slap it on my jeep.