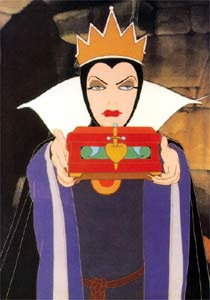 "The people who left under my reign are people I am still close with."

Those are the exact words Northampton County Voter Registrar Deborah DePaul used at last night's meeting of a citizens' advisory committee studying our elections problems. Her Highness revealed the source of our election troubles. It's her.

Retired Registrar Benner expressed dismay over DePaul's numerous letters to state and federal officials concerning HAVA. In one, she actually urged county executive Stoffa to ignore the new federal law. "While it might be criminal, criminals are pardoned." Benner flatly told DePaul those remarks are out of line.
Benner wondered why newspapers still call him with elections questions. The press has told him they can't get the information they need from DePaul's office. He's concerned the office may now be playing favorites, echoing some concerns he heard from Congressman Dent's office. And he noted that eight people have recently jumped ship. He questioned why the office no longer had a notary for affidavits brought in at the last minute. Greta Browne also wanted to know why DePaul couldn't send someone from her office to Nazareth's recent, and very successful, nonpartisan "resident to candidate" forum.

This is when H.R.H. DePaul launched one of her long, rambling defenses. Rarely have I seen someone use so many words to say so little. Maybe she should be a blogger. She blamed everyone but herself.

"Prior to coming here, that office was in major disruption. ... The atmosphere in my staff is wonderful. ... It's very professional and very pleasant."

As professional as her staff may be, she could not trust any of them to go to Nazareth. "That would be a bad situation. You're not going to send a tech to do a surgery." This is not brain surgery. As one of at least forty people attending that forum, I know her employees could easily have handled all questions. Blogger Ross Nunamaker was able to do so rather nicely. DePaul missed a major opportunity to recast her office in a favorable light. Her attitude betrays a distrust, both of her own staff and the public. She just doesn't understand something Benner said at the committee's first meeting. "People must be made to understand you're there to help them."

At last night's meeting, panel members Russ Shade, Peg Ferarro, Dick Benner, Greta Browne and Jack Bradt agreed to ask the Department of State for proof that the AVS WinVote machines are really certified. They also want assurances that the hardware shipped by Advanced Voting Solutions is, in fact, what was approved. Local state legislators will receive copies of this request. They are also working on a survey about problems in the elections office, which will be distributed to candidates, poll workers and voters.

As Benner expressed his displeasure with DePaul, committee members Russ Shade and Peg Ferraro are frustrated by state officials who ignore them. Russ Shade mentioned repeated requests for information concerning state certification. "I'm ready to go to the governor. ... We're not asking for a miracle." And Peg Ferraro complained, "They're not answering the public and they're supposed to be public servants."

Voter activist Alan Brau, a local physician, warned the committee this would happen. He has had to sue the state Department of State over its refusal, without explanation, to re-examine voting machines.

The citizens' advisory panel will meet again on February 28 and March 14, at 7 PM, in council chambers on the 3rd floor of the Northampton County courthouse. You can contact them with your views at voter.info@northamptoncounty.org. Minutes for these meetings are on the left side bar of this blog.
Posted by Bernie O'Hare at 2/22/2007 01:30:00 AM

Nice picture of Depaul. Is she holding the new, approved voting apparatus?!

Oh Politics and politicians..... Passing the Buck, Yup! When the county spent tax payers money on the new voting machines without knowing all the in's and out's and the pro's and con's of the machine's, who's fault is it? Who is the one who has the authority to spend a few million dollars on machines? I can guess not Depaul. Yet the panel of pet's meet week after week wasting yet more tax payers money and solving nothing.

The decision to purchase AVS machines came from a "selection committee" and DePaul was a strident defender of those machines and AVS, Her initial comments concerning those mnachines and what she is saying now are two completely different things. No she did not purchase the machines. That came from county council and it was based on her recommendation. She blocked Dr. Alan Brau's emails. He's a voter who was asking too many questions. So your supposition about DePaul's involvement in the purchase of AVS machines, is misinformed.

The panel of "pets", as you refer to them, is a nonpartisan committee of voters like you and me. The committee has no power and no budget. They are a paper tiger. So once again, when you talk about them wasting taxpayer money, you are misinformed. They are wasting no money and meeting on their own time and have already met 5 times to deal with a real mess. They are unpaid.

You say they have solved nothing. Here you are right and wrong. I think the committee already can see that the main problem in the elections office is the registrar. They have spent 5 weeks educating themselves and learning about DRE machines. Now, they have decided to send out a survey to a sampling of candidates, poll workers and voters. Thye are going to insist that the state DOS start giving us answers about those machines and how they are certified. They are considering recommending changes in the home rule charter.

In 5 meetings over 5 weeks, this citizens' group has been more productive than any county council I've seen since 2001.

So I pretty much think yopu're dead wrong and are letting your attitudes get in the way of the facts. But please feel free to come on here and challenge me. I think it's important that your views be heard, if only so they can be dismissed. And in some cases, you may be right.