Pennsylvania's Supreme Court: They Work Hard for the Money 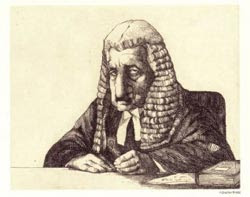 They work hard for the money. That's right, bippy. But we're not suitably grateful. Thanks to us, there's only six justices on Pennsylvania's Supreme Court. There used to be seven, but voters tossed one of them over an illegal payraise for judges that will cost us $14 million.

Ralph Cappy, the Supremes' boss, is now the highest paid official in Pennsylvania, with an annual salary of $180,336. The little supremes aren't far behind, pulling down $175,236 each. This, of course, is in addition to an unlimited expense account for judicial bottles of beaujolais.

Cappy sees no reason to listen to public concern over his payjacking or outrageous perks claimed by the supremes. After all, the public is just a "special interest group." That money is needed to "attract and retain" quality judges.

Just how hard do Ralph and his pals really work? Work, for an appellate judge, consists of writing opinions. That's how law is made. Other judges and lawyers rely on these opinions to interpret statutes and ordinances.

Well, this month, our top judges have yet to publish a single opinion. Oh sure, they hand down lots of rulings. They go something like this - "AND NOW, this 13th day of February, 2007, appellant's petition for allowance of appeal is DENIED." Gee, I could do that. I just did.

I've looked at 2006 to see just how many real opinions were released, whether they were majority opinions or dissents. Over an entire year, there were only 258 opinions, or 43 per justice. That's under one opinion every week! And these guys have law clerks who do most of the writing.

"Chris Casey, the Buddha of Blogging, has 258 opinions every day!"

...And 1/2 of them contradict the other opinions! Could you imagine a judge with that personality disorder (sorry Chris).

Cheap shot! I don't post anywhere near the way Bernie does! I might be the "Buddha" but Bernie's the "godfather". I hear he's ordered hits on oyher bloggers! Hired some whacko named Shawn Miles!

Hits on other bloggers??? Do I need to hire a bodyguard? Quick Chris, what are your rates? Or are you too busy negotiating a hit on LVDem?

PaPro, Don't worry. Shawn Miles is just a fictional character in Casey's novel. He is fictional Chris, right? If not, I have this piece of advice. Stay away from vans.

By now you've received a copy of my reply to Rick Loomis of the Clean Water Act. Apparently my previous e-mail to Rick re BethWorks and SteelStax vis a vis clean-up of the polluted East Bangor site did not reach its destination. That's unfortunate because that missive warned Rick of the role that PADEP, U.S.EPA, Taggart Associates, LVEDC, Greater Easton Development Partnership and Mainstreet project all play in the "remediation" of PA Superfund Sites and brownfields, circumventing the federal Comprehensive Environmental Response Compensation and Liability (CERCLA) statute and Pennsylvania's courts.

This PA has done through the creation of BAT (Brownfield Action Team), a state agency influenced by Taggart Associates President and GEDP Donna Taggart, her husband, and the non-profit association's environmental manager Chad Helmer.

Donna Taggart's spouse, Glenn, the vice-president of Taggart Associates, is a professional planner and transportation project manager with extensive knowledge of the transportation planning planning process and over 30 years of experience coordinating transporation projects at the federal, state, regional and local level. He has extensive knowledge of the Pennsylania environmental documentation process for Enviromental Impact Statements. He has also assisted several PennDOT District Offices use the "1- Step Process" and his strong public involvement skills to advance high profile highway projects like the widening of Route 22 and the straightening of it stretch between the Easton Cemetery and Bushkill Creek Corridor between Easton's 13th Street and the Delaware River including the North Third Street beautification project.

"How to kill a comment thread" by Billy Givens

As The Morning Call columnist Paul Carpenter has written, the Pennsylvania suprere Court is corrupt.

To fully appreciate this corruption at the top requires root canal to the Pennsylvania judicial system's lowest depths, the municipalites District Justice (rechristened "District Judge," and the Court of Common Pleas.

To me, this spelunking of corruption's dark, dank depths is not breaking, or "killing," as you put it, of a comment thread, but rather a necessary life-line to the hope of saving honest government including Pennsylvania's courts.

Julian, You must have low standards.