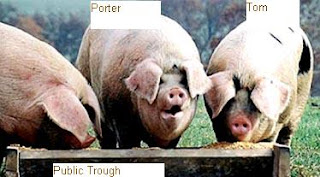 Chris Casey has finally been vindicated. He's the dude who dimed Upper Macungie supervisors fattening themselves at the public trough. He's paid the price. Public ridicule and the occasional death threat have taken their toll on his physical health.
The arrogant little piggies who abused their public trust, Tom Gorr and Porter Krisher, admit nothing beyond their consent agreements. They've been fined a paltry $14,000 by a disinterested state ethics commission for thefts that included $56,000 in payments to a tree service company owned by Krisher's son. No criminal prosecution. No resignation.

The trough's open for business again!

In his own blog at True Dems, Casey tells us

my favorite credit card expense of all is not Tom Gorr's charging his college courses, hell, it's not even his charges to duenow.com. to write his term papers for him. No, my absolute favorite is that he spent $1500 of taxpayers money for his enrollment at L.A Weight loss centers!

At the same time he was charging "business meals" to the Township credit card!
Taxpayers were paying for it going in, and coming out!

Talk about taxing both ends!

I'll have more to say about our state ethics commission later. Why wasn't this referred to the DA for criminal prosecution? With evidence this damning, why didn't the state insist Krisher resign as part of this consent agreement? It has done a disservice to Lehigh Valley residents. It has allowed a thief to remain in public employment.

We need a few more Chris Caseys and a few less of those public piggies in Upper Macungie, as well as the state ethics commission. Why not put Casey there? I know he's ugly, but that would be real reform. It wouldn't take a new law or constitution, either.
Posted by Bernie O'Hare at 2/26/2007 06:35:00 AM

Damn Bernie, I know I'm not pretty, but at least I don't scare small children! Oh, BTW, I'm working on a Children's story in the vein of the great Dr. Seuss. I'm clling it, "The Goreass and the Porterhouse Pig." Use you imagination!

So you are writing a book about Al Gore, but he's one of yours. He was looking sheepishly like someone from the farm last night at the Academy Awards.

This is totally OT, but I'd support Gore in a heartbeat if he were to announce.

Last night was pretty funny, not sure if you saw it, but he started to and then they cued the music. I never knew Gore had it in him to be funny. He did win an oscar for The Inconvenient Truth.

I didn't see it, but read about it. He's no longer the same person who "used to be the next president of the United States." The robot is gone, he's running on manual, and I really like what I see.

So do I. But I don't think we are that lucky that he is going to run. I'm leaning toward Hillary these days, but still keeping an open-mind. I would maybe even consider Guilliani, but something would drastically need to be done for me to go that route.

I suppose my fave is Obama, but I sure wish he had more experience. I'm really not certain about anyone. But I would be if Gore entered the fray.

The good old boys need to go. All Upper Mac residents should appear at the 3/1 6pm Township meeting and demand a resignation from Porter Krisher. They should ask questions of Ed Earley - what was he approving - did he even read the expenses, or was it just a blanket agreement.

The gentle pig does not steal, lie, cheat, rape or murder.

it's the humanoid animal which does these things.

Thanxx Goddi/Gotti(god). Ya' know, what with the "made in Goddi/Gotti's image" and all.

Can it be referred to the DA now? Would that be legal?

Anon 11:04, Once these dudes sign off on the consent agreement, they escape enforcement, which would include criminal charges if appropriate.

Well there has to be a way the public can get an elected official out of office. Do you know how?

Hi, Added a new value add to my blog this weekend - a news widget from www.widgetmate.com. I always wanted to show latest news for my keywords in my sidebar. It was very easy with this widget. Just a small copy paste and it was done. Great indeed.