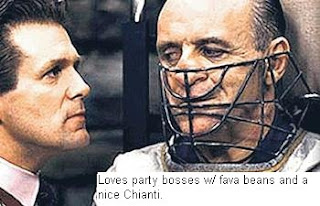 Not too long ago, LVDem told us about Norco Dem boss Long's attempt to "clear the field" for Sam Bennett's congressional race. I had my own report about DA John Morganelli's attempt to do the same in Lamont McClure's quest to be elected to Northampton County Council.
For some reason, these leaders are terrified of primaries. I asked then, and I repeat - Are these dudes actually afraid of a little democracy?

Apparently, the answer is yes.

Blogger Richard Wilkins reports "bullying and intimidation" yesterday by an unnamed local party honcho. What dastardly crime did Wilkins commit? Why, he had the temerity to suggest an open congressional primary. Someone called to say he doesn't want to see "this stuff in print." It's all "garbage." Funny thing. Nobody called me. I don't think LVDem got a jingle, either. Looks like it failed with Wilkins, too. He's writing away. Strong-arm tactics fail again.

I'd like to know what garbage is making party bosses so upset. That way, I can write even more. And what party boss could be so thin-skinned that he'd fly off the handle over something a mere blogger writes?

"Now if you'll excuse me, I'm having Joe Long for dinner."

So how'd he taste, Bernie...like chicken?

I spit him out. Too thick.

Get this: I learned from a supporter that Joe Long called him/her and encouraged him/her to support McClure WITHOUT EVEN MENTIONING THAT McCLURE HAS AN APPONENT! Joe Long uses shady means and tells half-truths, and is being just plain dishonest in his disgraceful act as a party chairman. Shame on his followers.
And Lamont McClure is not just a follower, he is directly connected to this destroyer of democracy. When the full truth about McClure is exposed, he will be a liability to Morganelli and even his own law firm, and certainly not the least bit trusted as a councilman. It will be as if having 10 months left on his term is far too (Joe) long.

written by Will Power

Party bosses want McClure. But we don't have to listen. State party bosses also wanted Casey over Rendell as Guv. We all know how that turned out.

McClure's wife, an assistant DA, has been spending her days scurrying through courthouse halls, trying to get signatures for her husband. What she does not realize is that she is really pissing them off. They only time they see her is when she wants them to sign a Lamont petition. She has no idea what their situation is. An employee popped on this blog to let me know last night. And why would her boss let her spend her time doing this? Oh yeah, her boss is John Morganelli, and Lamont is his pawn.

If that is true Bernie, then the child exploitation prevention unit shoud be up and running.
Perhaps she should be spending her time working on that instead of roaming the halls of the courthouse. I hope I don't run into her anytime soon, because she will get an ear full from me.

She apparently spent a day visiting offices in the courthouse, gathering signatures. Some people tell me they were just told, "sign this," without explanation.

An open primary would be welcomed (by me at least). I am originally from WA (moved out here 13 years ago). They were an open primary state until a couple years ago when they went closed. They are now trying to get it back opened.

Too many people do not want to be affiliated with either of the major parties...

Brad, I'm sorry but I misled you. When I spoke of an "open primary," I meant a primary in which party leaders don't predecide the outcome. I should have been more clear.

Critism from "the powers that be" is oxygen for the blogosphere.

1) You are undermining the mainstream media;

2) You are in very close proximity to a very complex audience that has been ignored for so long by the traditional media;

3) You ignore "the gate keepers" and communicate directly to the people.

Keep it up. You have more power and influence than you can even imagine.