For Nazareth Judge Wannabe Franczak, It's Fun to Stay at the Y-M-C-A 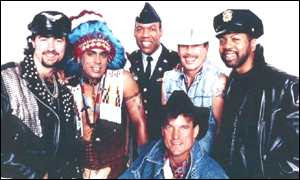 Mark Franczak wants to be Nazareth's next district judge. But he has a problem. He and his wife own a nice home in Bushkill Township, and that's outside of Nazareth's district. Franczak was also registered to vote in Bushkill, not Nazareth.

That's when the village people, the good ol' boys, stepped in.
"Young Mark, there's a place you can go. I said, young Mark, when you're short on your dough. It's fun to stay at the Y-M-C-A."

Elections office records reveal that on December 27, 2006, Franczak changed his registration from his marital residence in Bushkill Township to a room at Nazareth's YMCA . The Y charges a $60 weekly room rental rate. So our contributions and membership fees help subsidize a politician seeking election to a judgeship outside his district. In fact, they subsidize a pol who doesn't owe a dime for his Bushkill Township home.

"You can get yourself clean, you can have a good meal, You can do whatever you feel ... ."

One of the village people popped on my blog to claim Franczak is "REALLY LIVING (eating, sleeping, etc.)" at the Y. Well, I have a copy of the standard Nazareth YMCA room rental contract. It prohibits cooking, even hotplates. You can't eat if you can't cook. The contract also prohibits female, as well as overnight, visitors. You're not really living if you can't enjoy your wife's company.

Under our Elections Code, Franczak's residence is not the Y, but his family home in Bushkill Township. The obvious reason for this statutory requirement is to prevent the very kind of abuse that Franczak is trying to shove down our throats. Gazillionaires from Philly could rent rooms here and would control every office in this county. We'd no longer be a representative democracy. What Franczak is attempting is no different. If he moved his family into some apartment or home in Nazareth, I'd have no objection. I'd even help with the fridge. But Franczak doesn't want to do that because he might lose the election. He can't have it both ways. If he wants the job, he really must become a member of this community, and subject himself to the risk of losing.

Unlike many of our other laws, the Elections Code has some teeth. I don't believe Franczak has acted willfully, but has just followed some bad advice. After being put on notice that the Elections Code considers his residence his marital home, oaths or affidavits reciting the Y address could have serious consequences. He really needs to withdraw his candidacy.

"Young Mark, are you listening to me? I said, young Mark, what do you want to be?"

Regardless whether Mark rents from the Y or even sleeps there from time to time, our Elections Code considers his Bushkill Township home his true residence. And our constitution imposes yet another requirement. Anyone who wants to be a district judge must live in the district for an entire year preceding his election. Since Franczak didn't bother changing his registration until December 27, 2006, he's in no position to argue he's been in Nazareth for a year.

Yet he does. He claims to have moved into Nazareth in October. If so, and if Nazareth is truly his residence, where did he vote in last November's election? He's treading on very dangerous ground here. Once again, he can't have it both ways.

not sure how this fits in, but... looking at that village people picture and the guy in the construction costume reminded me that franczak teaches construction at bushkill academy...

Anna Mae did until a year ago this month reside at 574 Bangor Road, Easton (not the municipality of her former residency, just her mailing address, but in Northampton County - and, indeed, in the whole of the "Lehigh Valley," mailing addresses and MSA (Municipality Statistical Areas) constitute political jurisdictions -

Just like the Southern novelist William Faulkner's Yoknapatawpha County down in the Mississippi Delta, second home to the carpet-bagging Snopses, constitutes a political jurisdiction.

Wow, Billy is now posting off topic anonymously. I feel bad for him.

On topic, Great work Bernie. This kind of investigating is what is missing from the local papers.

Thanks for the very nice compliment, but it is undeserved. First, I'm no reporter. I'm just a citizen like you. Second, reporters must be impartial and have an obligation to get all sides of the story. That tends to slow them down, but their work is ALWAYS better. I've seen them find things out in an hour or two that I could never discover.

I've been hearing Franczak's side on this blog. His defenders, the village people and good ol' boys, have popped on with snippets. My point is that it doesn't really matter if he lives at the Nazareth Y. Under our elections code, his home is the marital residence in Bushkill Township. He's been wasting his time. And now that he is on notice about what the elections code says, he will be acting willfully if he fills out paperwork claiming that Nazareth is his home.

Nazareth has had enough from guys like Franczak. He really should withdraw from the race because his candidacy is illegal.

If the Anon. you finger as Billy Givens is in fact the culprit, why deny the pathetic old bastard
the pleasure - in his dotage - of imagining himself Procrustus stretchin Bushill Township's legs to fit Nazareth Borough's bed?

But if your tastes run toward reality, rather than the mere mythological, merely mention the name of any Pennsylvania politician and - believe this old geezer - you'll be ON TOPIC!

From what I hear about Billy Givens, read in The Morning Call Girl and the The Excess-Times, if handcuffs and straitjackets, fenced-off streets blocking access, city clerks, ehiefs-of-police, district judges, etc., can't restrain him, then neither is the OFF TOPIC device likely to bind the old Prometheus - or is a more apt comparison Prospero?

Bernie, which one were you in the 70's? the construction worker? Nah Biker? Maybe! How about the Indian Chief?! You'd look good in that head dress! Especially with that big ol' schnozz! I'll bet your tribe is the "Wannabeheards!" and you all ride bikes with underwear flags flying behind them, and use the schnozz the great spirit provided to "Sniff" your way around!
Now isn't this more entertaining that Mr. Off Topic himself, Billy Byter?!

If the head dress makes the nose look a little smaller, then that's me.

Pardon my Bushkiller here, but these fuckin' schister pols like Franczak & scores of others at every level of government need to have their political nuts cut. Its sickening the way they snake around the rule of law to get ahead for themselves & at our expense. Bastards.

No wonder there's such political apathy. Few folks give a shit about politics 'cause most of us feel pretty disenfranchised from the system when its run by these self-serving bastards. And it seems to only get worse.

Oy vey. It ain't lookin' so good for any of us, Bippy.

Great work Bernie! But I heard that Mr. Franczak wants to move in with you. Hold out and make him do all the cooking and cleaning

Anon 1:20,Our demoicracy is not just a right but a fight. There will always be tensions. Those who attempt to play the system, whether it's an outsider who plays games with residency rules or govcernment officials who meet secretly, will always find a way. But some things are worth fighting for. I can't do much on a federal or state level, but we can keep our eyes open for what goes on locally. This summer a group of Nazareth citizens did just that. It was an amazing sight and a good sign.