Benner Gets Green Light for $5.5 MM Apartment Building Next to OBT 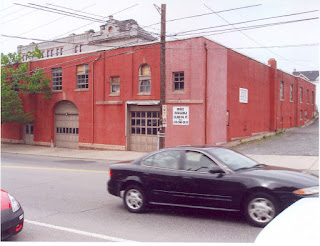 At their June 22 meeting, Bethlehem's Zoning Hearing Board voted 3-0 to support dimensional variances that will permit Bethlehem Attorney Garrett Benner to build a 33-unit apartment building at 124-128 W Union Boulevard, next to the Old Brewery Tavern (OBT). The property is currently owned by the Casilio family, but is under agreement of sale to B-Land Company, owned by the Benners. Instead of tearing the old warehouse down, Benner has proposed an adaptive re-use. He will spend $5.5 million of his own money, with no special tax concessions or public grants, to build something that he testified "will improve the general character of a neighborhood ridden by crime."

The vote was 3-0 because two members of the Board recused themselves. Attorney Michael Santanasto has represented some members of the Casilio family, while Attorney Linda Shay Gardner's husband has publicly supported the project.

Attorney Chris Spadoni, representing the OBT, objected to continuing with just three Zoning Hearing Board members, complaining his client is "deprived of a full board." But Solicitor Erich Schock asked, "How does that prejudice you? The vote dynamic does not change." He noted there is no difference between a 3-2 vote and a 2-1 vote. The hearing went on, but the Board did vote unanimously to seek alternates.

Benner was represented by his father, Dennis Benner.

Garrett presented photographs of the exterior and interior of the old warehouse, noting that the building is "tattooed with graffiti" and that there are numerous broken windows. "Things have become progressively worse over the past several months," he said.

"Is that a picture of an abandoned car inside?" asked Bill Fitzpatrick. Garrett acknowledged that there were various cars inside the building, on the first floor.

Benner's plan is to use the building footprint as a garage for parking 39 cars on the first two levels. He will use an adjoining lot 114 Spruce street to provide 18 additional parking spots. Then he will build three floors on top of the two existing garage floors with 15 two-bedroom and 18 one-bedroom apartments. Fixtures will be stainless steel and granite. Most apartments will have their own balcony, and the rents will be between $1,200 and $1,500 a month.

Benner met with downtown Bethlehem merchants concerning this project, and he received a letter of support from the Downtown Business Association, penned by Donegal Square's Neville Garner. "The greenest building is often the building that is already built," said Gardner. He added that the apartment building will "support small business when finished."

But Spadoni, representing the OBT, was concerned that tenants will complain about the bar, which he claimed can get a bit rowdy. "We want to be protected," he said.

The OBT was the only objector.

After deliberation, the Zoning Hearing Board imposed three condition on their 3-0 approval. First, all leases must state that the apartment is located next to a bar and restaurant facility, Second, windows are prohibited at the apartment on the west end. Third, Benner must provide as much buffering as possible from the OBT.

In other business, the Board voted unanimously to approve two sign variances along Wood Street for Moravian Village. Attorney Bill Matz argued that the signs would blend into the surrounding area, which is owned by Moravian Village. Also, Cheryl Hoch was granted permission to build a 12' x 12' porch at 1025 laurel Drive, so long as it is not enclosed.
Posted by Bernie O'Hare at 6/23/2016 12:18:00 AM

The rich get richer. Amazing how the Bethlehem inbreeding precludes so many people. You would think the only people involved in decisions and decision making in Bethlehem come form a pool of 100 people in a city with 72,000 people.

This is the Bethlehem way. Insiders rule.

Asie from the OBT, not one person opposed this plan, certainly no anonymous coward was there. Also, this is a project with no public handout. It is not CRIZ, NIZ, KOZ, TIF or LERTS. It takes an old dilapidated building and dies something with it. Yet you complain.

Who are these people who will shell out $1500/month? You can rent a 4 bedroom townhouse in much nicer areas for less.

if the market is nit there, Benner loses. But it will be his money.

@9:30 - there are people out there who prefer urban living, who don't want to drive everywhere or tend to lawns and gardens. Some might even consider it a plus to be mere footsteps from a bar like the OBT.

I do understand the OBT's concern that they were there first, but it sounds like some common sense measures can be put in place that works for everyone and a general "good neighbors" policy is never a bad thing.

It certainly is better than an abandoned warehouse.

Good project without taxpayer subsidy. OBT issue is a concern as they have not had to worry about noise rules associated with their liquor license up to this point. Now they will have to comply or be subject to complaints like every other Restsurant/Bar in the city must do.

Scott @9:36,
They're still going to have to drive to get groceries. It's not like Madison Farms, where practically everything you need is visible from your apartment window. Yes, it's for the urbanista, but without all of the local amenities.

Madison Farms is a totally different experience vs being 2 blocks from Top 10 Main St in USA. Question is do you want walkable groceries or walkable downtown experience--take your choice?

They will be a block from Union and Main. Check out the row houses in that block. They and their residents who frequently hang out on the stoops make Allentown's Linden Street look like Park av. All these so called "luxury" apartments end up being not so luxury.

Patriot2@1:03,
The question is, are there enough "trendy" people willing to shell out $1500/month, who can also afford to eat out? Main St. is great, but you can't get all you need for a household there. It's mostly restaurants and specialty shops. Not a roll of TP in sight.

2:34, Benner tried it on nearby Goepp and it was very successful. But don't let facts get in the way of your negativity. There is no public $ involved in this deal, which leads me to believe it is probably a very good idea.

3:56, The distance to grocers is no grater than for those in the 'burbs, and there are numerous in-town markets. The grocery at Westgate is 1.6 miles away. Valley Farm is just 2.4 miles away. Elias Farmers market is just 3 miles away. The gas station 1 block away sells TP. It might be a bit tough for someone without a car, so maybe that is why there is ample parking, most of which will be on the first two floors. This will be good for the city, and should not be too much of a burden on the schools, though the 2-BR apartments might impose a drain if many more are built.

Bernie@4:27,
My only negativity is that it is getting harder and harder to find affordable housing in Bethlehem. If you work here, you can't afford to live here.

But that's not hat you said in your comment at 2:34. You actually bashed the neighborhood and trash the people who live there in less expensive homes and claimed that the upscale apartments won't stay that way. Now you are saying you wish there as more affordable housing. So basically, you completely contradict yourself. The only thing consistent about your complaints is their negativity.

Was the condition actually "provide as much buffering as possible", because that is unenforceable as written.