NorCo Emergency Management Has Had No Director For Over a Year 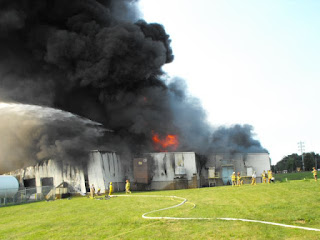 We're fortunate to live in an area that has no major snowstorms like the Blizzard of '16, or major storms like Hurricane Sandy or Irene, with people out of power for days at a time. We can count ourselves fortunate that we have no major highways intersecting the Lehigh Valley like Routes 78 or 33, with chemical spills that make it necessary to evacuate residents in Plainfield Township, or bus accidents involving Lehigh university students. We have no reason to be concerned about raging stormwaters that strand motorists and residents or fires like the one at the Nicos Polymer Co., which might still be burning for all I know. We never

That's the Lehigh Valley in another dimension. In this one, we do have our share of natural disasters. For years, we could always count on Bob Mateff, Director of NorCo Emergency management Services, to be prepared for all contingencies.

A little over a year ago, Mateff left his job at Northampton County to become Deputy Director of Emergency Management.

Executive john Brown has allowed thos position to remain vacant since that time.

Here's a message from someone at the 911 Center.


Those of us at the 911 center have been without leadership. Brown has refused to hire a County resident endorsed by the majority of fire & police chiefs after 3 rounds of interviewing. The individual even had PEMA and FEMA endorsements. The acting director is under investigation by HR and they won't tell us why. The 911 Center and Emergency management is rudderless. God forbid we have a repeat of hurricane Sandy or major disaster. Check it out. Brownie and crew have another mess on their hands.

The word I have is that brown had hired someone who got cold feet at the last minute and decided to turn down an offer.

But allowing this public safety leadership position to remain vacant for so long is still irresponsible.

Maybe Brown should spend a little less time running for Auditor General and a little more time doing they job he was elected to do.
Posted by Bernie O'Hare at 6/01/2016 12:00:00 AM

Brown is an empty tin can who surrounds himself with incompetent weasels like Cathy Allen. What else should we expect from the Clown Administration?

Sorry but that place has to many chiefs and not enough Indians. It has been an insider game for some years now. People have been hired to don't do well on tests, as long as they have an in. Big for PT firefighters and the like.

If they hire a new boss it better be someone who can take control of that place and stop the nonsense. Check out their practices.

Sounds like the note is from a disgruntled employee who's upset about not getting the job. Thanks, John Brown for standing athwart the leviathan and yelling stop.

Another sign of Brown's ineptness. This is the classic example of an unqualified executive, supported by Allentown powers-to-be and Fed Ed associates [J.B. Reilly and Topper], interfering in other municipalities' affairs and extending their influence throughout the Lehigh Valley. Another Fed Ed goal of becoming top dog in the valley.

Bernie,
Looks like someone wanted this proprty for future development and staged a tragedy by design in this depiction of the hostile takeover tactiks employeed by the circuses pyrotecniqs crew of court jester and palumpas party favor consessionair comPETitors 50/50 campaign donors¿¡($
Re:publican redd

As a Fire Chief in Northampton County I know a local candidate was highly recommended by FEMA and PEMA and many individuals. He was screwed by those at the 911 Center because he's considered an "outsider" and would have identified the incompetent individuals in leadership positions in the 911 Center and Emergency Management. Keep digging here Bernie, you're onto something.

APPLY BOH. You love to chase ambulances and this way you could get paid for it

Mr. Rinker from Upper Nazareth fits the bill to a "t". By the way. The Borough of Nazareth still has no Emergency Manager listed on it's website. After all the hoopla concerning this by citizens after Sandy and the snow a few years ago you'd think the position would be a priority to fill. Nah, the pool, Ambulance non-profit and legion redecorating are more important to the so called pillars of the community. Similar to the county.

Call Cathy Allen! She will fix the problem.

What would shoo-in Executive Callahan do?

They still have to fix their internal problems.

This county has some very qualified local emergency managers, some of which meet the qualifications set forth by the county. Maybe the county should looks towards some of these local agencies to identify someone who has a passion for and understanding of the challenges facing our county!

6:36am,
He sounds like one in the know of the collective team like a hemrode that becomes more and more inflamed before it has to be surgically removed or just gushes down the legs infecting the feet and they too must be chopped off at the knee?!($
Sorry bernie I had too,the pic has traumatized me again?!($
Re:publican redd

The best candidate and most qualified was already overlooked because those already employeed feared him and were in on the interview process.

Hose heads and house wife's, that's what they hire

The NC 911 center needs a serious investigation. Many problems there
from long time dangerous equip failure to incompetent management. If the public only knew, it would scare the sh*t out of them.

Rinker is the worst possible choice. If people only knew how shady he is and what he did to put lives in jeopardy multiple times, they'd wisely remove him from Emerg Management.

We've been trying to get people to investigate the 911 center! Someone in a position of influence, please give a damn enough to call for an investigation! Seriously!

Yes they do, but they won't without external pressure.

Unfortunately, it's not. It's quite true.

I'm also a fire chief in Northampton county. I havr complained multiple times about how management there a lot of time doesn't put in my correct structure dispatches, which has resulted in incorrect dispatches. Fortunately no one has been hurt or killed yet. I have guys working at the 911 and they tell me about how the same tech errors have been going on for years. And that there are a lot of equipment failure.

The place has become a joke.

Yeah, the source sounds legit. HR has been investigating the management at 911. But they may not have enough authority or ability to fix all them problems.

The individuals with authority at NC 911 are completely brainless. The last thing they want is anyone looking into this center because they would probably get fired!!. There are multiple issues that are pointed out to them on a weekly basis such as computer glitches,and map issues just to name a few. These issues have the means to affect police, fire and ems response, but do they care NO, they would rather sit in there comfy office(if they even put in a full days work) and play on their phones. Nothing will happen until a citizen dies from these errors, oh wait they would just blame there employees sounds about right.