Sex-Crazed Peacock on Loose in Bethlehem 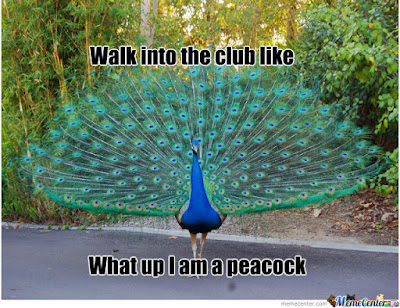 "If anyone is missing a peacock.... I just saw one crossing Catasaqua road. Near The Landings Apartments." wrote Kelly Smith on Wednesday at the popular Facebook Group "You Know You're From Bethlehem ...". . Well, that persistent peacock has been spotted all over North Bethlehem since then. He was last seen yesterday on Pennsylvania Avenue, making his way to Broad Street. Police have issued an APB. If you see him, don't try to take him down alone. This is a very dangerous peacock. He is also sex-crazed, so I'd avoid wearing anything that might make you look like a peahen.

How do I know this? Bethlehem has its very own Jack Hanna, except her name is, believe it or not, Sue Henn. She used to raise these birds and identified the peafowl as a male India blue. She warns they get a little rambunctious this time of year because they're out looking for peahens when not eating grass and bugs.

If the peacock is not in a bar, she claims it will be spending the night in a tree, about 20' off the ground. I used to do that myself, back in the day. They are reportedly wily and difficult to catch. She thinks the bird will find his way home after he runs out of money, like most males.

He will probably be peacock-blocked.

If he sees you and mistakes you for a peahen, you've got a problem.

In the video below, a peacock attacks a few defenseless children. There were no survivors.

i was hoping your headline was a euphemism.

Amazing video. One of my favorite bird. Now if anyone looking for the best hair transplant in australia then visit to the our website and book your appointment.

That;s her name. For real.

No harm, no fowl.

Lock up the chickens and the liquor, the peacocks are on the loose!

Bernie,
As said you are the shit, butt please don't get the shims feathers in a fluff again this weekend?!
Sitting in chair pinZ and neddleZ poking every pore of my very being waiting for Allentown's wick dippers to dipp there wick into Allentown political pressure cooking pot of blue juice spattering in the advert is mentalists faces?!($ Is it working or do I smell ass as the chalk and paint to make a taint what it ain't, flip flopp LLC's inbread collusion continues?!($
Re:publican redd