Ejectment: How Squatters Hurt Everyone Else 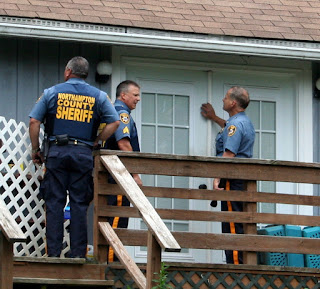 Most of us our well aware of the very real damage that predatory lenders can do to everyone. Or unlicensed mortgage brokers who conned banks into extending credit to home buyers, knowing that the loan will never be paid. All of this contributed to the collapse of the real estate bubble, which hurled us all into the Great Recession. But there are people who take advantage of the system, too. They use every trick in the book to get something for nothing.

I'm not referring to the mythical welfare queen made famous by Ronald Reagan, but real people who come in all shapes and colors.  They end up costing all of us money, and in some cases, they cost people their lives.

Consider this. A couple purchased a home in Upper Mount Bethel in 2005, which was secured by a mortgage. Everything was hunky dory. But about 2 1/2 years ago, they refinanced the property with a local credit union, paid off their original mortgage and decided to just ignore the new one.

The credit union was forced to file a mortgage foreclosure action, to which this couple responded with bullshit claims that it had paid, that their money had been stolen. After two years of refusing to pay their mortgage, the credit unionbought the property at Sheriff Sale.with the couple still living there.

Desiring to get out of this mess as quickly as possible the credit union sold it to my friend, Ron Angle  He approached these squatters, and they gave him song and dance every time he stopped by. The fellow was waiting for a big union pension that never seemed to come. In the meantime, the couple was unwilling to even pay rent on a decent and secluded home on 2.3 acres.

Angle brought an ejectment action, which is the kind of action filed to remove a squatter. At a non jury trial in June, the couple came. But before the trial could get under way, the husband pulled a Fred Sanford. He grabbed his chest and shouted, "I'm coming, Elizabeth!. It's the big one!" He then hurled himself on the floor

Deputy sheriffs and paramedics raced to this freeloader's assistance, and he was strapped in a gurney and rolled away to a waiting ambulance.

He was released from the hospital that very day, and was home in time for lunch.

Instead of continuing this case to September, President Judge Stephen Baratta listed it again just a few weeks later. This time the couple never bothered to show up, though they had spoken to Angle the day before.

Judge Baratta granted ejectment, but gave the couple ten days to find a new home. Angle visited them several times, and was always told that they'd be out the next day.

Yesterday, Angle came again. But this time, he was accompanied by a locksmith and five deputy sheriffs wearing body armor. They were there to remove this couple, and used me as a human shield.

Obviously, an ejectment can get ugly so you need several deputies who have to be trained and ready for anything, as is certainly the case in Northampton County.

Though the air conditioner was going full blast, no one was at home. When Angle got in, he was greeted by two dogs who the owners left behind along with tons of garbage.

All locks were changed but one, and the deadbeat came back a few hours later and went through that door. Then he called Angle and threatened to kill him.

That's nice. Angle made sure he took his dogs and now all doors are secured.

In the end, these deadbeats ended up staying in a home for 2 1/2 years without paying a dime.

These are the people who make it difficult for everyone to get loans. They drive up our real estate taxes, and the make deputy sheriffs very insecure.
Posted by Bernie O'Hare at 6/30/2016 12:00:00 AM

There is nothing worse than public embarrassment. Their names should be mentioned.

I could but won't name them.

How the Hell does Angle rate five Sheriffs when other folks won't get any help? This guy knows who's wheels to grease. You painting him as a saint, yet somehow he really knows how to play the system and have the taxpayers foot the bill for his own private police force. Hopefully, he will be billed by the County. Don't hold your breath.

It would be foolhardy for sheriffs to send just one or two deputies to an ejectment, especially in a rural area. Angle pays the same as everyone else does for a writ of possession. It is paid before the sheriff lifts a finger. No special favors for anyone. He is not the one playing games, but the squatters. You missed that bc you are full of hate. I did not make him out to be a saint.

Bernie, aren't you a squatter, typically on the way home, in the woods?

Bernie,
Can you find out what Angle did with the dogs?

Being lied to is an every day occurrence for a landlord. When money is involved and they don't have it, they lie.

When the squatter called Ron to threaten him and broke into the house, Angle made sure he took back his dogs.Otherwise, he would likely have ended up with two more dogs bc the closest SPCA is in Philly.

I should say that the closest SPCA that had room for dogs is in Phiy. There's one in Easton, but it is full.

It is nice when good wholesome folks have the spotlight turned on them. Wifey was leading the anit-Ron poop deal with claims of pollution toxic this and that "I'm protecting the environment" In reality the property was full of dead cars, trash and they were burning said trash within ten feet of their well. The same well that was such a concern. Funny how people who are so worried about what everyone else is doing seem to be the biggest offenders. You reap what you sow.

Your love of all things Angle continues to define you.

In Atlanta where my sister-in-law lives, "squatters" are put in handcuffs and hauled to jail by the Sheriff's department for breaking-into private property and trespassing.

Apparantley here in PA the law plays games with them.

Wow- he got that property for a steal! Will make a nice profit if and when he chooses to sell it.


Ronald Gillis Understand one thing Susan, in theory and in general, I agree with this sentiment, HOWEVER, and it is a big however, most credit unions and smaller banks are also committing fraud and part of the problem as well. No they don't steal as much and WF, BOA, Chase, etc, however, if your in that smaller number that is stolen from, is it any less devastating? Just don't overlook this aspect as well!! We need to fix our government, monetary system, election system, and basically an entire overhaul of everything.
Like · Reply · 1 hr
Susan Richardson
Susan Richardson Yes! I thought going into MERS would make eyes glaze over. However, if 75% of big bank customers moved money out this week, change would be immediate.

http://www.housingwire.com/articles/37385-supreme-court-to-consider-miamis-predatory-lending-suit-against-bank-of-america-wells-fargo?eid=311688298&bid=1445964#.V3KtbIEu2wE.facebook What I am saying is that these people may be taking advantage of situation, or they may have a legit reason to stay put, if you read the Fannie Mae Manual, or even the Wells Fargo manual, the GSE contracted attorneys do not get the home if it is still occupied. I certainly do hope that the credit union sent an ACT 6 or ACT 91 Statute of Limitatons is 15 years, and even the PA state constitution Insolvent Debtors
Section 16.

The person of a debtor, where there is not strong presumption of fraud, shall not be continued in prison after delivering up his estate for the benefit of his creditors in such manner as shall be prescribed by law.
Ex Post Facto Laws; Impairment of Contracts
Section 17.

No ex post facto law, nor any law impairing the obligation of contracts, or making irrevocable any grant of special privileges or immunities, shall be passed.

I hope for Ron's sake that fraud is not involved Prof. Adam Levitin: Federal regulators don’t want to know, so they won’t have to act. & "Our courts should not be collection agencies for crooks." — John Waihee, Governor of Hawaii, 1986-1994.

A lone constable does evictions ejectments all the time, even in rural areas.


5 has expired. In such cases, the defendant’s possession is derivative of the plaintiff’s title, and the defendant is not permitted to challenge it. Emerick v. Tavener, 50 Va. (9 Gratt.) 220, 223 (1852). However, a plaintiff in the second class of cases, who claims a right of possession acquired after the defendant’s original, lawful entry, must show the validity of that right. When the plaintiff’s after-acquired right of possession is based on a claim of title, the plaintiff may be required to establish the validity of that title. Corbett v. Nutt, 59 Va. (18 Gratt.) 624, 648 (1868).
2
Actions for unlawful detainer in the foreclosure context generally fall into this category.
3

Now the picture is clear. If in fact the family was protesting one of Angles schemes it is no surprise he now owns their property. His reputation is well known by oldsters up here in the slate belt. He has made a fortune off the misfortunes of others. The fact that the Bank went to him and he had all this help form the county is no surprise. His wheeling and dealings have made him a millionaire. Question is how many victims have been left at the side of the road.

You try to re-write history but older people up here know all about the mouth that roars and the damage he can do.

"A lone constable does evictions ejectments all the time, even in rural areas."

I would not decide policy in the sheriff's office based on what some lone constable does. What you describe is very foolish.

The TENANTS ARE SCUM BAGS... SCAMERS AND LIARS.... to stand in front of the community with the "sludge" an pull this sleeze......

the system we have in place is nefarious at best, I have done extensive research along with others like David Dayen, author of Chain of Title, Scott Stafne, Neil Garfield, Matt Weidner who actually stood in the Florida Supreme Court and held up a mortgage note that had been securitized and asked the Honorable Judges if it was a UCC-3 or UCC -9? It's why Mayor Sal Panto can't find the bank in the public records or get a response to the many tax bills that go thru the mail and then are not paid. There are plenty of deadbeats and scum bags out there, on both side of the fence. However, you bring up a point that needs to be addressed, Where is the wet blue ink note? and is it filed as Nancy Becker of Montgomery county pointed out (as MERS, in accordance to the Fannie Mae Service guide MERS is the conduit that gubbermint uses to morph a UCC 3 non negotiable instrument to a UCC-9 RMS for the PSA pool, ) is not lawful in the Commonwealth, when she filed (coincidentally Montgomery got settlement for all filing fees that were never paid a handsome sum of money for a county general fund). And where is the encumbrance ? Here is what Charles Koppa wrote to me —–
We formed www.TitleTrail.com when I realized that “The Title Insurance Industry”, “MERS”, and “Foreclosure Attorney-Trustees” had co-conspired with loan servicers at the expense of both home owners and investors “No paper trail, no government compliance, no knowledge of the REMIC investors, no knowledge of the borrower, etc”.

oh Happy 4th of July everyone