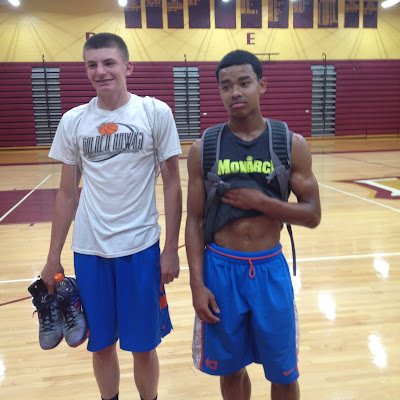 One guy is smiling in this picture, and the other is not. That tells the story. Becahi's Golden Hawks defeated the Allentown Central Catholic Vikings in summer basketball last night. Because of threatening skies, the game was played indoors at Whitehall High School. At one time, Beca was up by double digits, but Central fought back and finished the game three points behind. 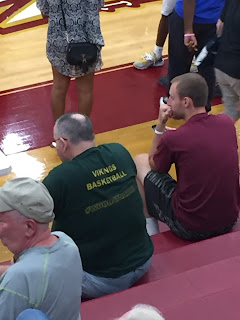 The smiling player is Becahi sophomore Caden Giordano, who is about 18' and still growing. He's been getting a lot of playing time this summer, and scored at least four in last night's game. Central's "Who Dat" Lambert told me he was not smiling because he wanted to see the basketball draft, but the truth is he hates to lose.

In my mind, they are all winners. Caden and Dat used to play together in grade school.  They were mentored by Ace coach Emil Giordano. He happens to be a judge in his spare time.

In other games, Whitehall beat Liberty by 14 and that's because Mikey Esquilin was able to play. Northampton, led by Aiden Elwood, edged out Freedom.
Posted by Bernie O'Hare at 6/24/2016 12:00:00 AM

So we have the Stellar tournament in a few weeks and then Sportsfest...doesn't get any better than that.

I am looking forward to it! It will be hot as hell.