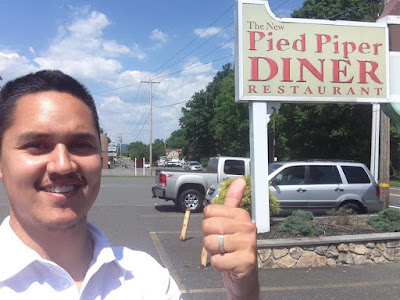 Last September, a charter school teacher lured Allentown school district students away from their classes with Big Macs, eggrolls and rides in Nate Whips' limo. I called him the Pied Piper of Allentown.He's now a former charter school teacher, who was at one time facing 145 citations for corrupting the morals of minors

He actually posted the pic you see above, which shows that he at least has a sense of humor.

His trial on some of these charges is scheduled at 10 am today before Magisterial District Judge Karen Devine. Her courtroom is at 501 Hamilton Street in Allentown. Frassetto started a GoFundMe page for the $2,500 needed for his legal defense, but only collected $190..

Prominent criminal defense lawyer Gary Asteak confirmed that he represents the Pied Piper. I know from my own dealings with Gary that he will sometimes represent a client because he thinks it is the right thing to do and is a man of honor.

Gary is an excellent attorney but his choice of pro bono clients sucks.

Disappointed in Gary. Gary, You do have the respect of many but see it diminish with choices like this.

Was there ever any criminal intent in this protest ? With Mr. Astek for the defense there could easily be a not guilty decision